By Lindsay Cameron WilsonNovember 23, 2017No Comments 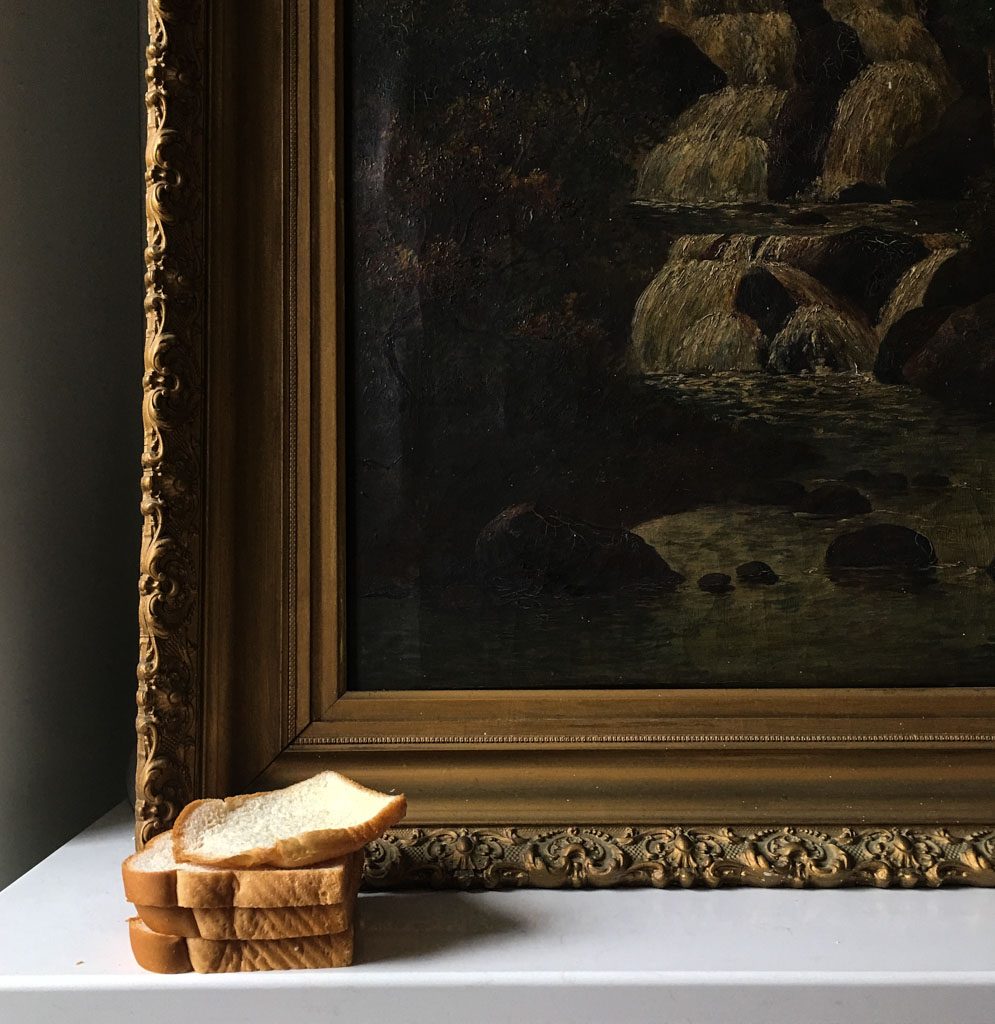 I used to live near a bread factory. It produced hot dog and hamburger buns and sliced white bread that lasts for weeks on the shelf. Every morning an aroma from the factory floated through the neighbourhood and into our windows. It was a sweet smell, one that it came with visuals: there was height and squish to the smell- not a cotton candy squish but a soft, spongy squish, one that didn’t bounce back but would condense into a thick, sticky paste capable of clinging to the roof of your mouth.

My mother didn’t buy bread like this. She mostly made her own, usually the brown, wheat germ filled kind. That meant we wanted the white squishy kind, all the time.

The other day I found myself at home with five boys. It’s wasn’t a big deal; our lego-filled house absorbs them well. Until lunch time. When the clock struck twelve they all poured in to the kitchen, pacing like hungry cats. But it was the end of a holiday weekend. The cupboards were bare, except for a big, squishy loaf of sliced white bread.

I had bought the bread a few days before to clean a dusty old oil painting I got for twenty-five dollars at a local auction. I bought it for the frame; there was so much grime on the painting the waterfall was barely visible. But a friend told me to clean it, with bread, the way her mother used to back in Hungary. A quick google confirmed her advice – it’s true, a gentle rub with a squishy, sweet slice somehow soaks up years of whatever it is that coats a painting. My wholemeal bread with flax wasn’t going to cut it. It had to be soft white.

So there I was, making grilled cheese with aged cheddar for five boys, using soft white with a best-before date still seven days away. As the sandwiches sizzled in the pan, the sugars in the bread caramelized and turned everything crispy and golden brown.

The boys said they were the BEST sandwiches they had ever eaten. Where did I get this bread?

My cousin’s wife was coming over for dinner after visiting her son in the hospital. It’s been a horrible time for her family. It seemed trite today to be writing about art and sliced bread.

I poured her a glass of wine. We sat together and talked. She shared her coping mechanisms. A quick smoke at night, out in the driveway between the cars where no one could see her, was her saving grace these days. She was even in mid-drag the other night, crouched down for optimal obscurity, when her mother in law, my aunt, arrived with a casserole. “Good for you,” said my aunt, staring down at her between the cars. We all need something.

She told me about tonight’s visit to the hospital. It was tough. They’re not sure when this will end. But, there was a highlight – the hospital kitchen served grilled cheese sandwiches that night, “made with cheap, white bread,” she said.  “It was so good. I ate everything he couldn’t finish.”

The bread factory moved out of my old neighbourhood. It’s in an industrial park now, filling the neighbouring parking lots and warehouses with its sweet, squishy scent.

But you can still find the loaves, sitting for days on end in my local grocery store, waiting for that moment when you need it most.

Below is a grilled cheese sandwich I made on an episode of LOVE FOOD. It’s perfect for those moments when you’re looking for a comforting grilled cheese that’s a step beyond basic. I call for sliced, crusty sour dough here so bear in mind-  this is a sandwich when you don’t need rescuing and your paintings are clean. The secret ingredient is a thin layer of mayonnaise on the outside of the bread – it creates that caramelized coating we’re all looking for.

A small handful of Greens – watercress, arugula or spinach

Butter for the pan

Spread Marmalade on two slices of bread. Add sliced cheese to one side, then pear slices, then more cheese, then a few sprigs of watercress, arugula or spinach.

Heat butter in a fry pan. Spread mayo on outside of sandwich. Carefully lay sandwich into pan. Gently squish with the lid of pan or a spatula. Add mayo to top side, and when underside is golden and cheese is melting, flip and grill other side. Sandwiches can be made on a grill pan or panini press.