By Lindsay Cameron WilsonAugust 27, 2021No Comments 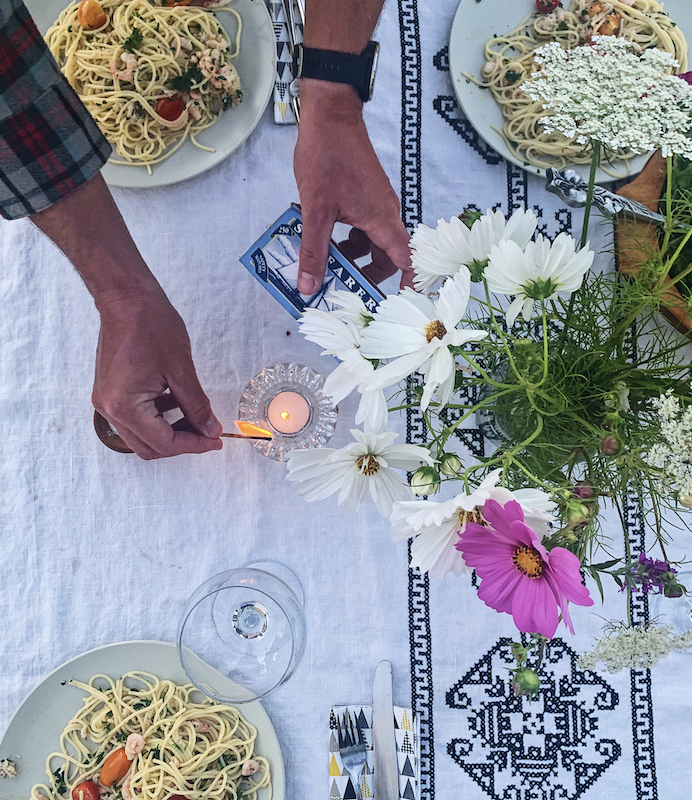 I stole my first bouquet of flowers on my older sister’s wedding day. I was twenty-three and woefully under qualified to make a cake for eighty people. But I did it anyway, a carrot cake slathered with cream cheese icing with candied green grapes to decorate the top. But when I arrived in my aunt’s garden where the reception was taking place, the crystallized grapes had melted into a wet, bodily-fluid-like slime. I remember sweat prickling through my bridesmaid’s dress and loose strands from my french twist falling across my melting face. Guests were milling around, curious. I wonder if they saw me wade into the cluster of cosmos, the flowers that float like butterflies on their tall, feathery stalks? Did they watch as I pressed the blossoms all over the cake until it was studded with pink, white and deep red blossoms?

I took a long break from cosmos after that. I was always nomadic in the summer, never planting my own seeds, never staying long enough to grow or harvest. But I’ve read cosmos thrive on neglect. They’re drought tolerant. Once seeds are watered and underway, they will grow easily in any soil, then bloom wildly, all summer long, especially when pruned. They want to be picked, stolen and enjoyed. This is what sixteenth century Spanish explorers did when they found them in Mexico and brought them back to Madrid, where Spanish Priests cultivated and planted them, with wild abandon. The Priests named the flower cosmos after the Greek word for a ‘harmonious universe.’ Nova Scotia is a long way from Mexico. Our hardiness zone is 5, where temperatures can range from minus 20C to plus 30C. But cosmos thrive here during our salty, sun drenched summers. Especially in August, in my parent’s small garden by the ocean.

My cosmos stealing habit was revived a few years ago, in that very garden, when my younger sister and I built a cottage together on the Northumberland Strait. My friend calls the cottage ‘sandy scandy’ – a place with a Scandinavian vibe, where sandy feet are welcome. Last summer I took a picture on a warm, August evening that best captures the place: my brother-in-law’s hand lighting a small candle, plates of snow crab pasta and a bouquet of cosmos. The division of labour wasn’t fair that night; my sister made the pasta, the one she makes every summer with chopped tomatoes, lemon and snow crab, fresh from Cape Breton. She also set the table outside, the table my brother-in-law and husband made one hot Saturday. She covered it with a white tablecloth embroidered with black thread, a gift from a friend who visited last summer.

I picked cosmos for the table and took a picture.

My parent’s garden is just over the gully from our cottage, past the overgrown clay tennis court, through the patch of grass we call the baseball field and behind their cottage, beside the plum tree. Every spring my dad fills the garden with a truck load of compost he buys from the garbage dump, then plants potatoes, lettuce, zucchini and pumpkins. Then, he borders the south- west corner of the garden with cosmos seeds. By mid August the corner is filled with tender, tall, fennel-like stalks, asking, I’d say, to be picked.

In late June I planted a small garden bordering the south west corner of our cottage. I planted tiny cosmos and zucchini, along with tomatoes and a fat basil plant. A month later I had to stalk the cosmos; the offshore breeze had tipped them into the bordering Queen Anne’s Lace. The tomatoes are now tangled into the zucchini, and the basil is flowering. But I’ve been dead-heading the cosmos and they haven’t stopped blooming. This afternoon I’ll squish them onto a cake and I’ll serve it for dessert.

When does a person become an adult? When they make a wedding cake? When they stop stealing flowers from the neighbours? When they plant their own garden? Or when they’re smart enough to grow something that thrives on neglect, but flourishes when shared.

I wrote about summer essentials, including that snow crab recipe above, a few years ago over here. Here’s the recipe:

Cook pasta in salty, boiling water until tender. Reserve 1 cup (250ml) of the cooking water, then drain pasta. Toss pasta with crab mixture and reserved pasta water until combined and season with salt and a swirl of olive oil.  Serve with remaining chopped parsley.