Sara MacCulloch and that Valley Glow

By Lindsay Cameron WilsonDecember 7, 2016No Comments 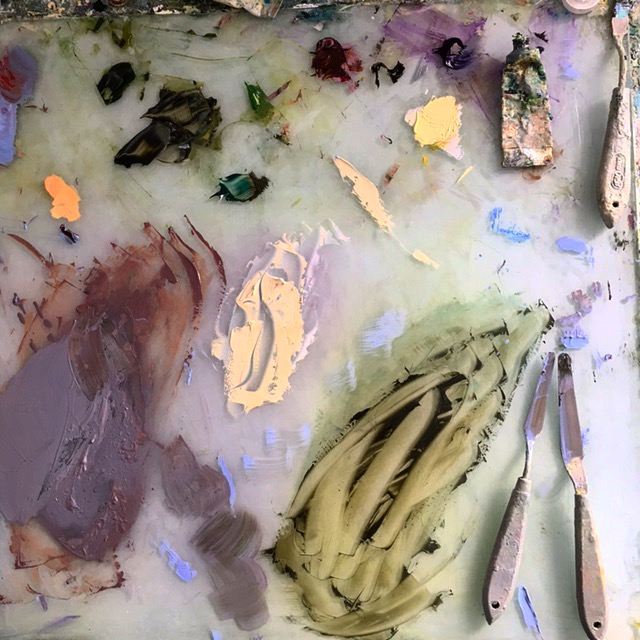 Sara MacCulloch’s palette is full of greens and yellows, with a touch of blue and shades of pink.

Sara MacCulloch paints landscapes. I stopped in to visit her a few weeks ago on an unseasonably warm, late fall afternoon. She had just hung her clothes on the line. We had a drink and talked about her life, her paintings and the unique glow they had taken on since she had moved to the town of Wolfville a few years before.

“The light, it’s totally different here,” she told me. “It glows.”

Wolfville makes up part of what we Nova Scotians call ‘the Valley’. The Valley stretches from Digby and the Annapolis Basin eastward to Wolfville and the Minas Basin. The area in between is sheltered from the Bay of Fundy by the steep North Mountain, while the South Mountain below shelters it from the Atlantic ocean. This protected area – the Valley – has its own microclimate; temperatures are relatively warm and the soil is fertile. It’s perfect for fruit and vegetable farming. There are over 1,000 farms in the Valley, most are small and family run. Grape orchards are on the rise, and apple orchards, they’re everywhere.

I was on my way that day to interview Josh Oulton of TapRoot Farms. Josh and his wife, Patricia Bishop, are organic fruit and vegetable farmers with a thriving CSA box community. They are also establishing a flax growing and processing industry on their farm. Re-establishing I should say; the linen industry in Nova Scotia dates back 350 years. They’re bringing it back.

But I wanted to talk with Josh about apple trees- the fruit, the branches and the soil underneath. He chose a tree just beside his farmhouse – a Nova MacIntosh – and told me its story. You can hear our conversation on episode 13 of The Food Podcast. Josh knows his stuff. His favourite apple? A Honeycrisp.

I imagine Tap Root Farms are nestled into one of Sara’s landscapes. She paints what she sees while walking her dog, or in the winter, while cross country skiing along the dykes. Those small family farms are often dotted amongst her green horizons, separated by golden fields and hedgerows. The sky, it varies. Sometimes it’s shades of blue and grey, but lately, you’ll find pink. Her palette above tells this story.

I found these words in Sara’s artist statement:

The challenge for me is always to capture what a place looks like and feels like but also to have a relationship with the painting as I am making it.  To be open to what may happen in the studio.  I don’t start with an exact idea of what the painting will be when I am finished.  All I know is what I want it to feel like- and I never really know how that will come about.

Sara’s words remind me how I want to feel when I’m in the kitchen. The meal isn’t so much about the end result, but being open to what might happen, what is happening. The smells. The warmth. The feel. The GLOW.