Finding Flavour in the Forest

By Lindsay Cameron WilsonDecember 15, 2016No Comments 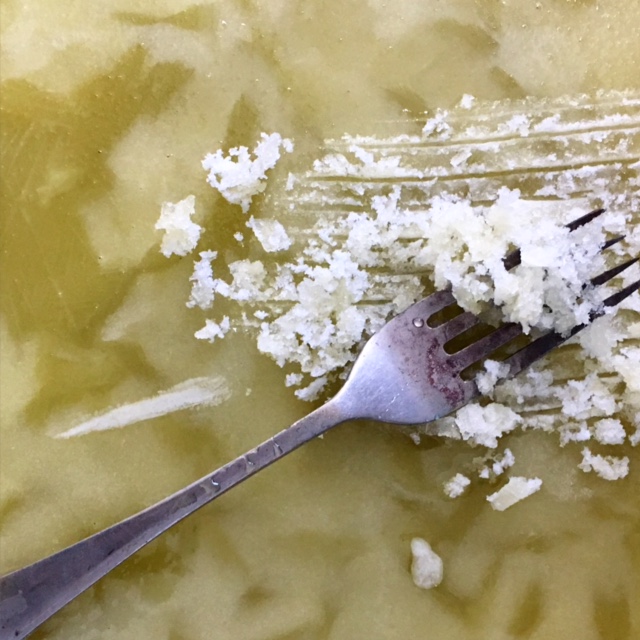 There’s a little bookstore, tucked away on Lamb’s Conduit Street in London. It’s called Persephone Books, and all the book jackets are grey.

But inside each cover, on the ‘endpapers’, is a colourful work of art. A surprise.

Persephone Books publishes previously out of print titles, written by women, originally published in the ‘interwar’ period. The books are stacked on their sides, forcing you, inviting you, to come close. Beneath each title is a little write-up stuck to the shelf, written by the staff, sharing highlights of what’s inside. Beside the description is a touch of artwork, a taste of the endpapers on the other side of the jacket.

I picked out Kitchen Essays by Agnes Jekyll, originally printed in 1922. The endpapers are taken from a printed silk, named Clusters of stylised fruits, flowers and shell motifs, ‘reproduced with courtesy of the Victoria & Albert Museum, London’. Inside the grey jacket, beside the swirls of periwinkle blue and cream flowers, are these words: “Agnes’s gift for friendship and organisational skills made her an excellent hostess: Mary Lutyens described her house as ‘the apogee of opulent comfort and order without grandeur, smelling of pot-pouri, furniture polish and wood-smoke.’ ” Agnes embodied all my goals (I’d swap pot-pouri for chocolate chip cookie aroma), so needless to say, I bought the book.

Chapter One is titled Old Friends with New Faces. The title made me smile; lately I’ve been giving an old friend a new face too. Granita – the Italian ice, made from freezing a sweet liquid then slicing it up to resemble a flakey snow cone of sorts – used to be a staple of mine. It doesn’t require an ice cream maker, just a pastry scraper or a fork, depending of the size of the batch. I used to make a coffee granita, inspired by the Zuni Cafe cookbook. I even put a version of the recipe in my book, Ice Cream! way back when. But after my trip to London, where pine needles were having a moment, I decided to make granita again, but this time with a new face.

It’s not an original idea. I saw ‘pine granita’ on a menu when in London last month. My sister-in-law tucked into a dessert with ‘pine ice’ when in Boston recently. Enjoying pine in unique and wonderful ways is all just part of the Nordic culinary trend penetrating professional kitchens all over the world. It’s all about foraging. Using what you have. Going back to our roots. Finding flavour in the forest.

So in the spirit of finding flavour in the forest, last week when visiting my parents, I clipped a branch from their white pine tree and brought it home. I made a simple syrup – 2 cups water to 1/2 cup sugar, brought it to a gentle boil, then swirled it around until the sugar dissolved, and took it off the heat. I pulled the needles off the branch, stuffed as many as I could into a 1 cup measuring cup, then tipped the needles into the now just warm pot of syrup. I put the lid on and left it to infuse for the rest of the afternoon.

Some granita recipes featuring other needles, like rosemary or Douglas Fir, suggested puréeing the now cool mixture in a high speed blender instead of straining the mixture. So that’s what I did. But the end result, despite a really good blitz, was still prickly. So I strained the mixture through a jelly bag and poured it into a pan big enough for the syrup to form a thin layer – 2 cm or so. This is important for the shredding phase.

The next day I pulled the pan out, shredded the frozen syrup (as seen above), then scooped the shards into a container and placed it back into the freezer.

That night my parents came over for dinner. It was my father’s birthday. After dinner but before dessert, I spooned the pine granita into my mis-matched glass cups and for the first time in my life, served a palate cleanser. Granita had always been, for me, a straight up dessert, served with a dollop of ice cream or whipped cream. But this time, it didn’t seem right. That subtle sweet pine, almost a blend of lemon and mint with a hint of forest, deserved to be savoured all alone.

The old friend with a new face was a success. It cleansed the palate, clearing a space between braised chicken and birthday cupcakes. But it also sparked discussion and a spirit of wonder around the table.