By Lindsay Cameron WilsonSeptember 14, 2020No Comments 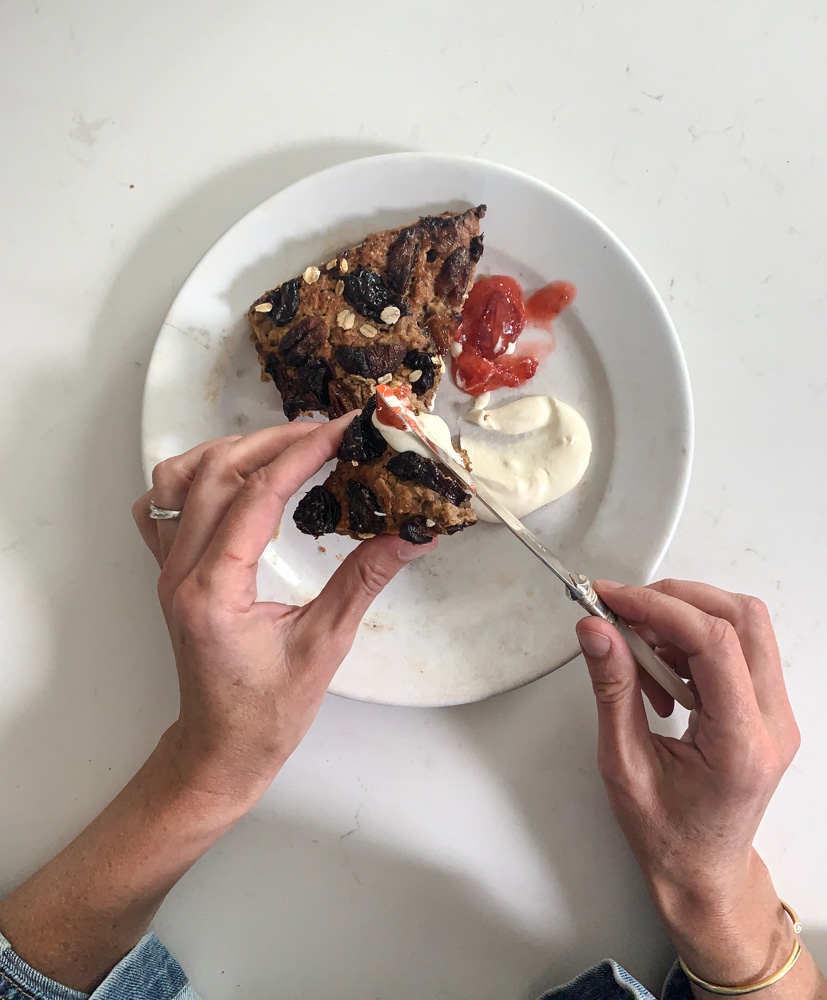 A long time ago, Air Canada used to serve tiny scones with strawberry jam and clotted cream on flights from London to Halifax. This little treat would emerge several hours into the journey, just as Newfoundland appeared below and England seemed so far away. It was one last decadent taste of the place.

It was the clotted cream I loved the most: dense but light, and sweet, but naturally so. Some say it originated in Cornwall, but those from Devon claim it as their own. I’d eat it anywhere, even from a small plastic container off an airplane tray. Since then, I’d sometimes find it at our local specialty grocers, but for the most part, clotted cream lived in my memory as a taste of travel.

Now that I’m only travelling via my kitchen, I decided to make clotted cream myself. I got the idea from my mother, who recently went to high tea at a friend’s house. Homemade clotted cream was on the menu, and she was given some to take home. I happened to be there when she pulled it out to spread over pancakes; it was heaven – dense but light, and sweet, but naturally so.

As it turns out, making clotted cream takes a long time.

The process begins before bed with a barely warm oven. Heavy cream goes into a shallow pan, then the pan goes into the oven overnight, or long enough for the fat in the cream to pull away from the watery whey (that’s the romantic way of saying ‘until it clots’, but that brings blood to mind, so instead, let’s say ‘pull away’). After 12 hours in the oven the pan cools on the counter, then it goes into the refrigerator for another 12 hours. At this point, the fat will have completely pulled away from the whey, forming a layer that resembles, some say, soft-serve ice cream. The creamy ‘soft-serve’ is spooned into a bowl and the thin, liquid-y whey is discarded. What’s left is clotted cream.

Are you wondering why I didn’t march up to the specialty grocery store and buy it? I’ll tell you why – I’m too lazy to leave my house. I come by it honestly. Some might say I grew up in a haven of homemade enviro-friendly goodness – my mother sent us to school with sandwiches made with homemade brown bread, wrapped in old bread bags with crumbs still lingering in the bottom. Cookies were homemade. Soup was homemade, and some of you might remember the stock was homemade too. When we weren’t basking in soup bubbling on the stove, we were washing windows with vinegar and water and wiping them down with old newspapers. My sister always thought this lifestyle was because our mother was an environmentalist who cared about using less plastic, less processed foods, less chemicals.

“Ha!” laughed my mom when I asked her for confirmation. “It’s true I don’t like to use a lot of plastic, but the homemade food and cleaning supplies? That was really because I don’t like shopping. If I can pull it together with what we have at home, that’s what I’ll do.”

So there I was a few nights ago, sliding a dish of cream into my oven before I went to bed. I couldn’t set the oven to 170F, as directed; the lowest setting on my oven is 200F. So, I settled on 200F, because I too like to pull things together with what I have.

Clotting cream in a 200F oven does not work. I woke up to a thick, golden crust of baked cream, floating above a thin milky liquid. It was beyond gross. Scab-like. Worse than a clot. I put it in the green bin, crust and all, feeling like a clot.

This morning I baked Claire Ptak’s prune, oat and spelt scones from the Violet Bakery Cookbook. I whipped cream just a little longer than normal, so it was almost like clotted cream. I spooned it over the warm scones with a spoonful of strawberry jam. I was in Devon, I was in Cornwall, I was in an airplane, flying high above Newfoundland.

Yes, I could have walked to the store, but where’s the story in that?

PS:
– there’s an online version of Violet Bakery’s Prune, Oat and Spelt Sconces over here
– if you have an oven that ‘goes low’, this is the recipe for clotted cream that I tried to follow… 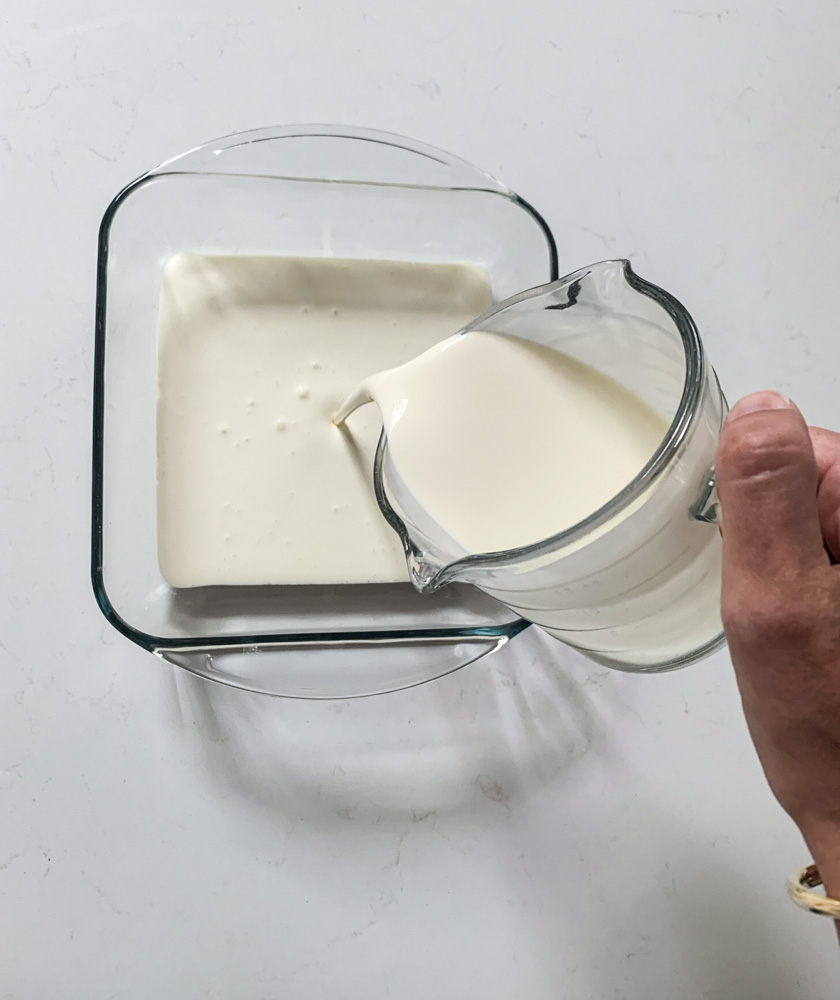 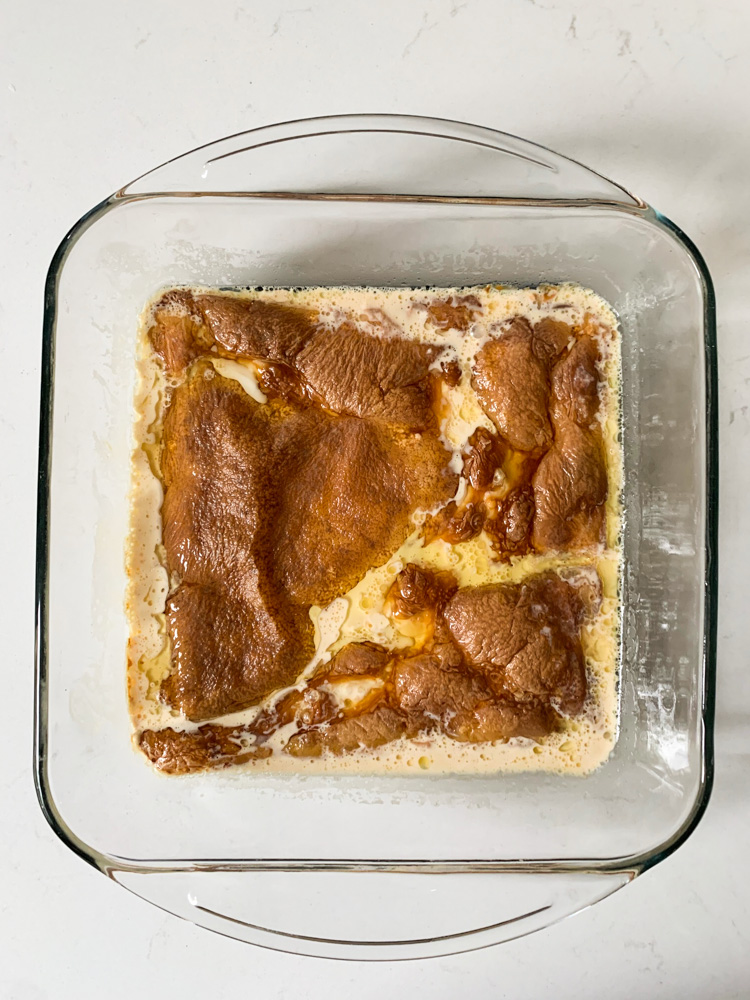