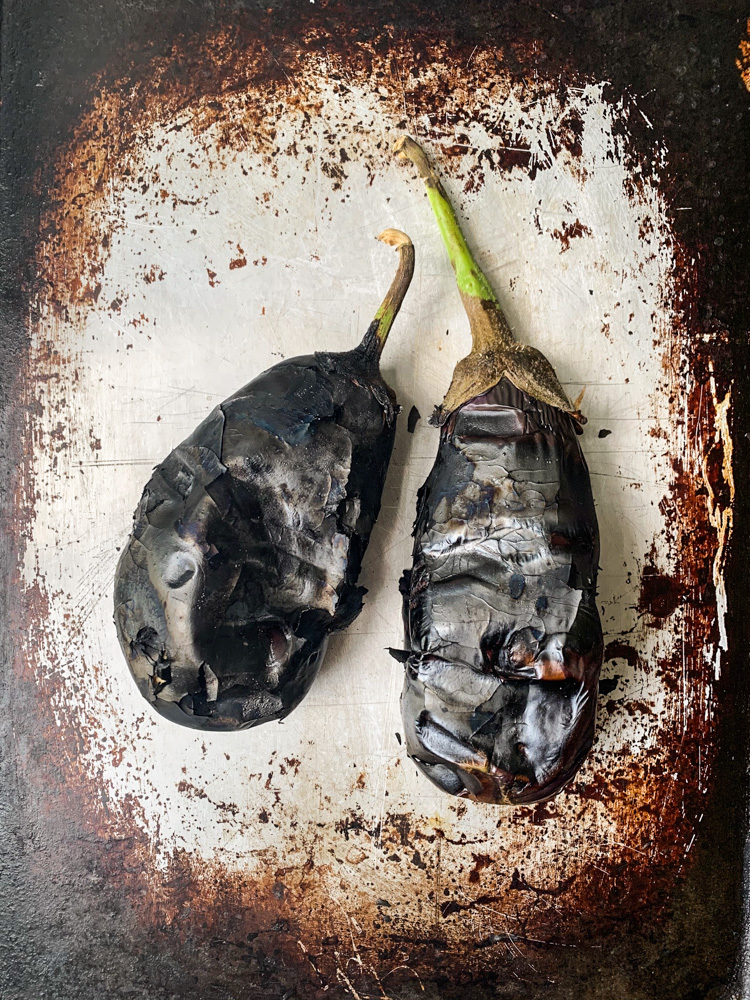 I used to work in a cookbook shop. Every morning, after unrolling the awning and sweeping the sidewalk, we’d ‘spend time with the books.’ This meant pulling extra copies down for the top shelves to fill gaps from a sale the day before. Or putting misshelved books back to where they belonged – French books back to ‘France’, food writing back to ‘literature’ beside the till, or cheffy books to the back beside the cafe. And all the while, we’d run our hands along the spines of the books, making sure they were flush. It was this daily sweep, like a flip through a Benjamin Moore fan deck, when I began to notice colour trends. Every year publishers seemed to crossover on a certain colour for the spine of the book – white, black, cornflower blue, forest green. And one year, somewhere between 2001-2003, the colour was aubergine.

I love the word aubergine-  as a colour, a fruit, a feeling. Unlike in England, this french word didn’t stick in English Canada. The word itself – eggplant – was presumably adopted to identify the white, egg-shaped version of the fruit. But somehow, overtime, we’ve tarred all eggplant varieties with the same practical, pale brush.

Eggplants are at the tail end of their season here in Nova Scotia. I’ve loved seeing their deep purple, lacquered skin shimmering next to squashes and tomatoes. It’s no wonder their colour was a cookbook trend; purple tones have historically been a symbol of sorrow, suffering, wealth and resplendence –  all themes found around tables of the world. And here they are, grown and glimmering in Nova Scotia.

Last weekend, as my friend Jasmine placed a feta and eggplant dish into the oven, I asked what the colour aubergine meant to her. Aroma is normally Jasmine’s preferred sense; I’ve watched her inhale a pear from her urban garden with eyes closed, warming it in her hands before passing to others to share in the moment. But I know she also inhales colour, and would have an opinion on the matter. As expected, she closed her eyes, smiling just for a moment, and told me about a textiles class she once took where they learned how to dye fabric with indigo pigments. The Indigo dyeing process, she explained, is steeped in science, but simply put, “feels like magic.” Fabric is dipped into a vat of indigo solution, but after the dip, it needs to take a breath of air, oxidizing it, turning the fabric from newly green, out of the bath, to a light indigo blue. Repeated dips -and breaths- will give a progressively darker shade of indigo, until it becomes essentially black. Her teacher described, though, a post-black; that if pushed even further, the colour actually slips back to a purple-black, with depth: aubergine. I thought of yellow-skinned, white-fleshed quince, transforming to bright red as they simmer in a pot with lemon juice, sugar and ‘air.’ Science, yes, but in Jasmine’s words, it’s a process that is ‘folkloric, magical alchemy.”

It also feels like folkloric, magical alchemy when you char whole eggplants over a flame until their insides soften and their skin slips from purple to midnight black. Charring is the first step in making baba ganoush, or moutbel, as it’s also known. Recipes vary, but I tend to follow a cookbook (with a spine the colour of eggplant flesh) called Moro, named after a restaurant in East London. After the eggplants have cooled a little, the recipe explains, cut the charred skin open and spoon the smooth, smoky insides into a bowl. Sometimes flecks of charred skin that cling to the flesh, and that’s ok. From there, whisk the flesh until almost smooth, then add garlic, lemon juice, tahini, olive oil, sea salt and black pepper. The key, it says, is to find the alchemy between all the ingredients by tasting and adding more of this or that, accordingly, until it’s worthy of that beautiful word, aubergine. 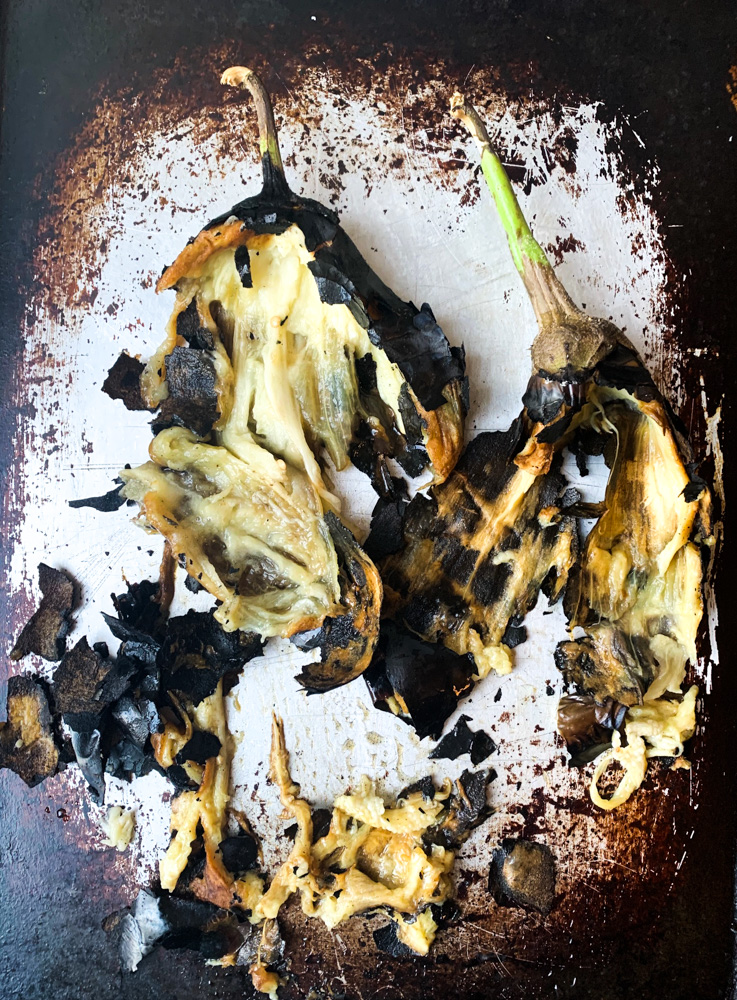 Pierce eggplants all over with a fork and place directly over a flame – on the rungs of a gas grill or a barbecue. Leave to char, rotating from time to time, until skin is blistered all over and insides are soft. (If a flame isn’t available, roast eggplants on a tray in a hot oven (425F / 220C) until soft inside.) Set aside to cool.

When cool, slice skin and scoop soft flesh into a bowl. Whisk until smooth (I don’t mind a few chunks here and there) then whisk in crushed garlic, lemon juice, tahini, olive oil, salt and pepper. At this point, add more lemon juice, or more salt, or a drop of water if it’s too strong, or too thick… eventually you’ll find that magic alchemy.

Serve however you’d like – as a dip, dolloped on salad, or as a bed for charred broccoli, as I did here –  an instant fancy lunch with lots of baba ganoush left over for next time. 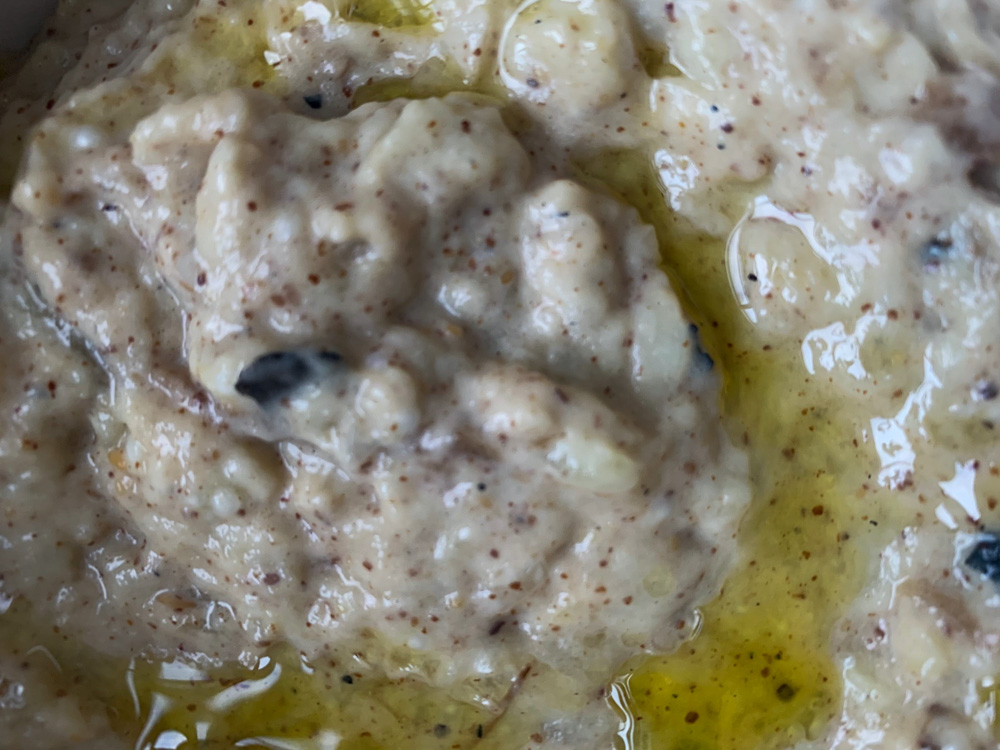 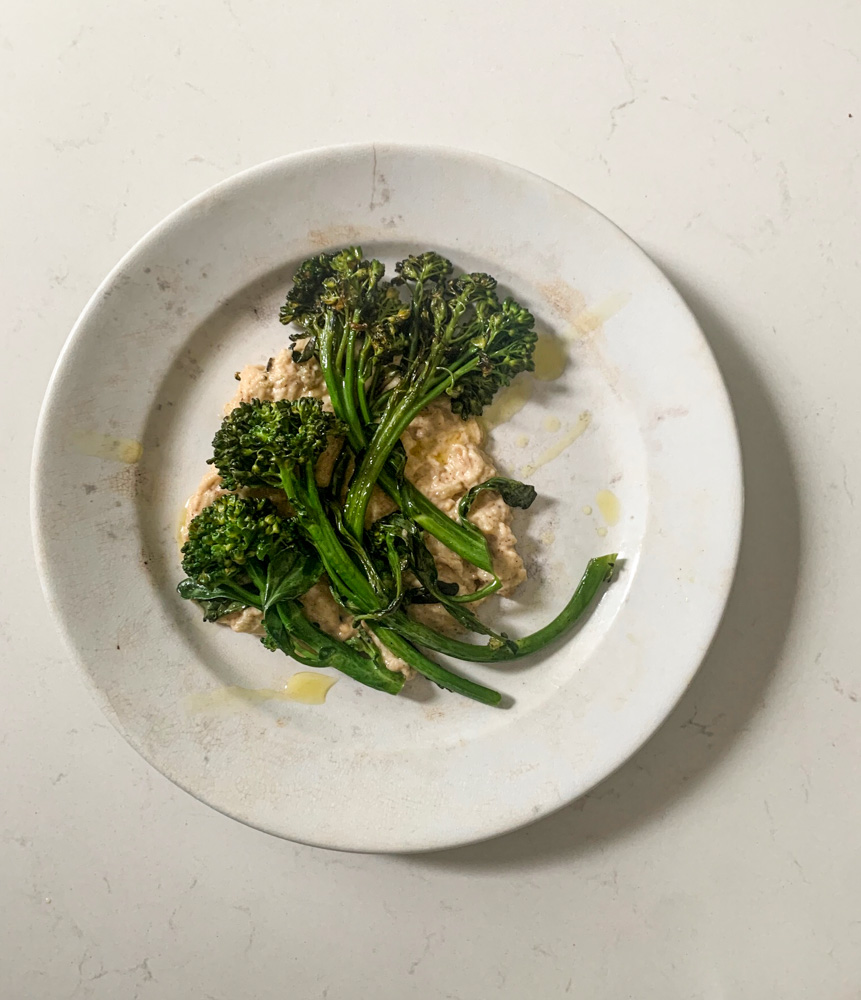