By Lindsay Cameron WilsonAugust 7, 2020No Comments 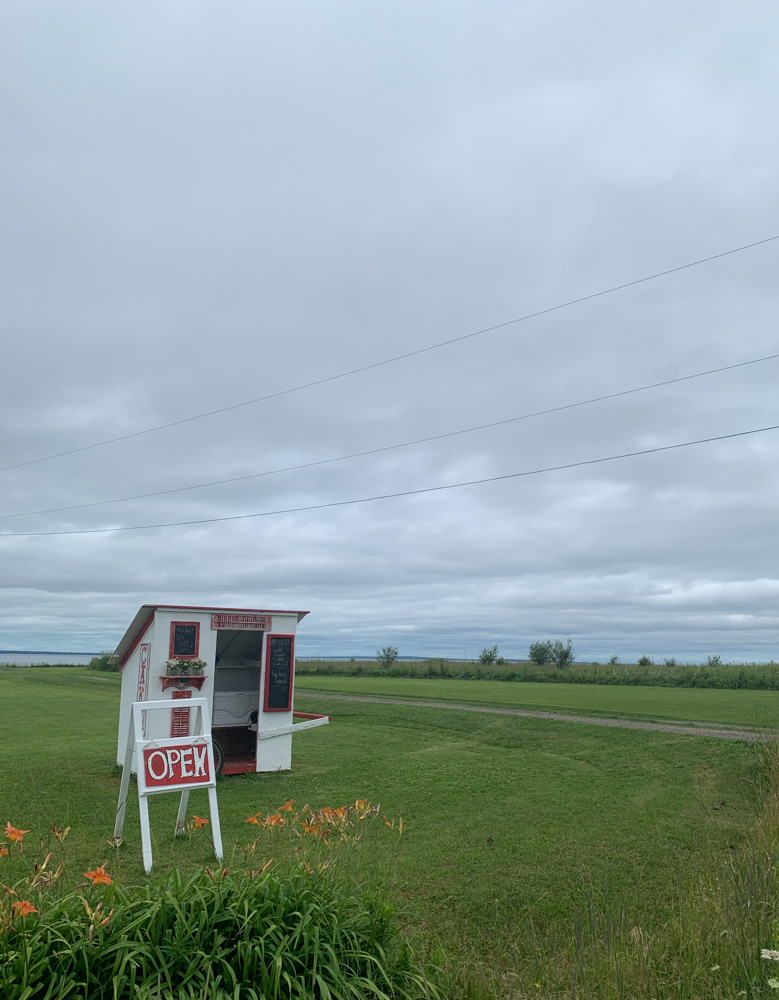 I’m on my new bicycle, the kind that requires padded shorts and click-in shoes. Its tires are sleek and glide smoothly along asphalt, but they’re also wide enough to handle a gravel shoulder. Its smooth gears are easy on my injured knee, and the drop handles are just high enough for my healing shoulder. It’s middle-aged heaven.

We’re on a mid-day, cloudy ride, climbing the rolling hills to the tip of Cape John. On the right are farmers’ fields dotted with grazing cows. On the left, tidy cottages on a thin strip of land stretch to the ocean below.

I lean into the wild roses lining the road, their pink petals close enough to inhale. My thoughts move from burning, out of shape thighs to an essay I once read, all about the intimacy that comes when you hug the road.

The essay, written by Ann Patchett for Outside Magazine in June of 1998, chronicled a journey Patchett took through the American midwest in a Winnebago with her husband Karl. The essay is now part of a collection called ‘This is the Story of a Happy Marriage,’ a title which tells us the journey was as much about their marriage (which we learn was hitting potholes at the time) as it was about infiltrating RV culture. I imagined Ann and Karl slumped in twin lazy boys, a young Archie Bunker and Edith of sorts, the windshield their television screen.

Halfway through the story, after they picnicked in the parking lot of a grocery store and watched the night sky from the roof of the Winnebago, they find themselves eating pancakes in a Badlands motor park with a couple of motorcyclists, Rhonda and Rodney. After breakfast, Rhonda, golden-haired, tanned and clad in black leather chaps and a bra made of ‘chamois cloth and leather cord,’ offers to take Karl for a ride on her Harley. As they roar away, Ann is filled with both jealousy and pride for her husband. And later, with these emotions still swirling, Ann watches as Karl returns. Now it’s her turn.

When I first read this story several years ago, it wasn’t their struggling relationship that lingered with me, it was this passage:

How you ride says everything about how you see the world. In the Winnebego we see the world from inside our house. We watch it as it rolls sedately past our living room window. But on the back of Rhonda’s bike, leaning deeply from side to side, I am the jutting purple mountains. I am the asphalt and the birds in the sky. I remember everything about those twenty minutes I spent in the blown-back cloud of Rhonda’s hair. People are more than willing to die on motorcycles because for that moment in the Badlands of South Dakota they are truly and deeply alive.

I’m not willing to die to feel truly alive, but I do want to step out of the living room, so to speak, as often as I can. I want to feel the cracks in the road, breathe in all that rushes past and catch things I’ve never seen before. Like the sailboat called Caper’s Pride, parked in a field, next to a rusted exercise bike and a pony. The lonely beauty of my friend’s farmhouse, empty because of travel restrictions. The grandmother in a huge vegetable garden, pulling carrots with her grandson. And best of all, the small shed at the side of the road, with the word CAKE painted on the side.

That’s when we pulled over, in formation, and ditched our bicycles. Was this a mirage? No, it was a cake stand, run on honesty. We opened the cooler filled with individually packed slices of chocolate tart topped with salted coconut and slivered almonds, and stuffed all the money we had into the small cash box. My sister fashioned a bag from her sweatshirt, and off we rode, three chocolate tarts swaddled across her shoulder.

Once home, tired but happy, we placed the slices on a cake stand and put the kettle on. Four forks, mugs of tea and a good conversation later, those Cape John tarts were gone.

This was the story of good friendships, enhanced when we became the road, the wild roses, the alone togetherness and the cake. 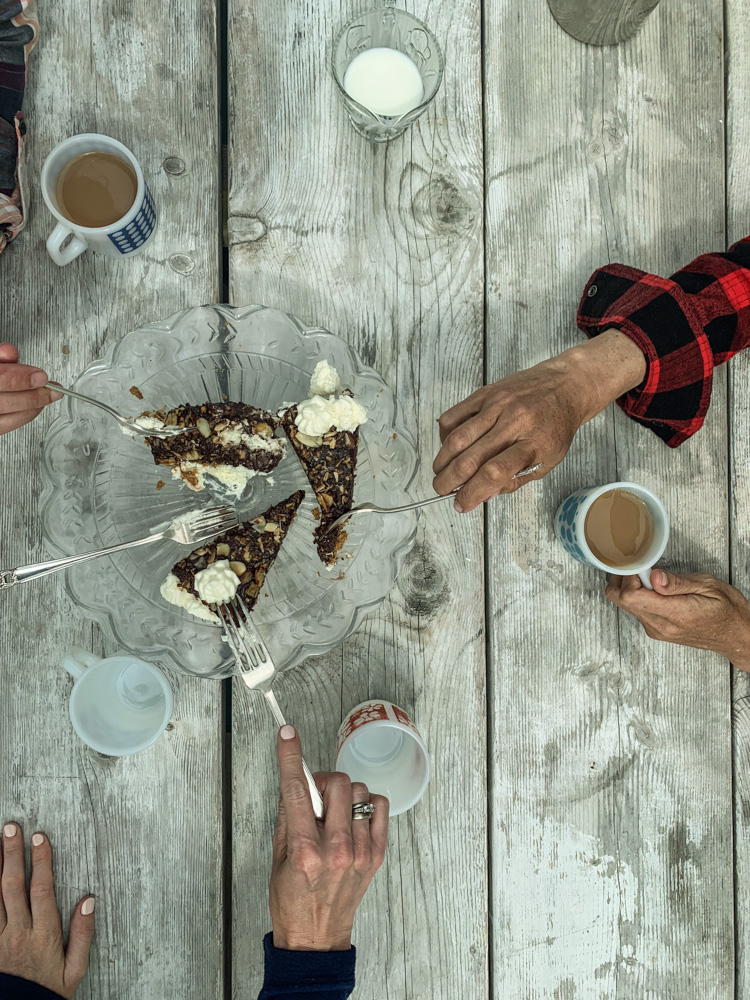