A Bowl of Cherries

By Lindsay Cameron WilsonJuly 24, 2020No Comments 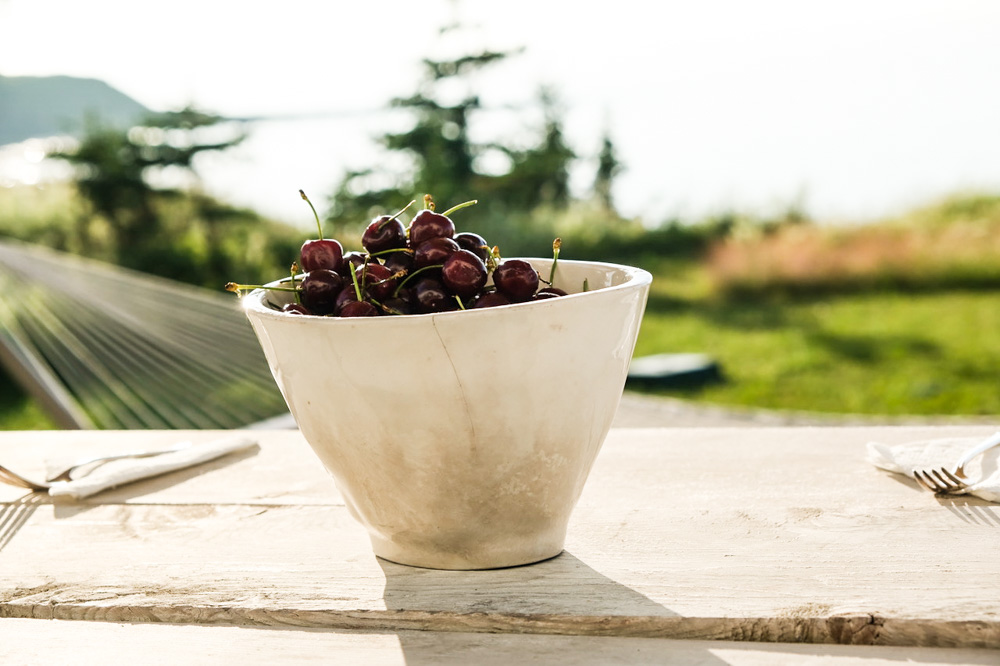 On Canada Day we sat here on the deck and ate ripe cherries from this old jelly mould. The mould had been taking up space on the counter that afternoon, sitting upside down, useless. We’re a ‘only keep what is useful and beautiful’ kind of family, and this antique wasn’t earning its keep. But then, in a rare moment of genius, I turned it over and it became a bowl. And as we ate the cherries, tossing the pits and stems over our heads into the gully, the internal beauty of the mould became clear. A gift, let’s say, for those who eat right down to the bottom.

Fanny Singer has a chapter in her new memoir, Always Home, called After-Dinner Fruit. She tells the story of her mother Alice Waters’s hands, so small but capable, always close to a paring knife, ready to slice a perfectly ripe peach after dinner. If you were lucky enough to be sitting next to her, you would be the recipient of the best piece.

I told my mother-in-law about my new fruit bowl. She said I really should have an epergne, the 18th century bedazzled French fruit bowl fitted with silver arms stretching outwards in all directions. Little bowls were perched on the end of each arm, showcasing the finest fruit available at the time.

If I had an epergne, I’d place a pile of local strawberries in the centre. I’d scatter wild rose petals from the gully in a few other bowls, and stack salted caramels from the Earltown General store in another. Cherries would be piled here and there, along with a few shreds of dulse from Grand Manan for those in need of salt. Something for everyone, from this place and time.

Fanny is my latest guest on The Food Podcast. She says she’s never been to Nova Scotia, but she did live in Cornwall, England, ‘an equally mercurial location by the sea.’ I’m sure if she visited, we’d offer her strawberries from the epergne, or more realistically, cherries from the jelly mould. And judging from what I’ve gleaned from her book and our conversation, she’s a lover of seasonal food, thrifted kitchenware and meals, al fresco. She’d toss pits into the gully, and happily soak up the salty air and the hum of fishing boats off in the distance.

A life, on a deck, that’s beautiful and useful.