By Lindsay Cameron WilsonAugust 13, 2020No Comments 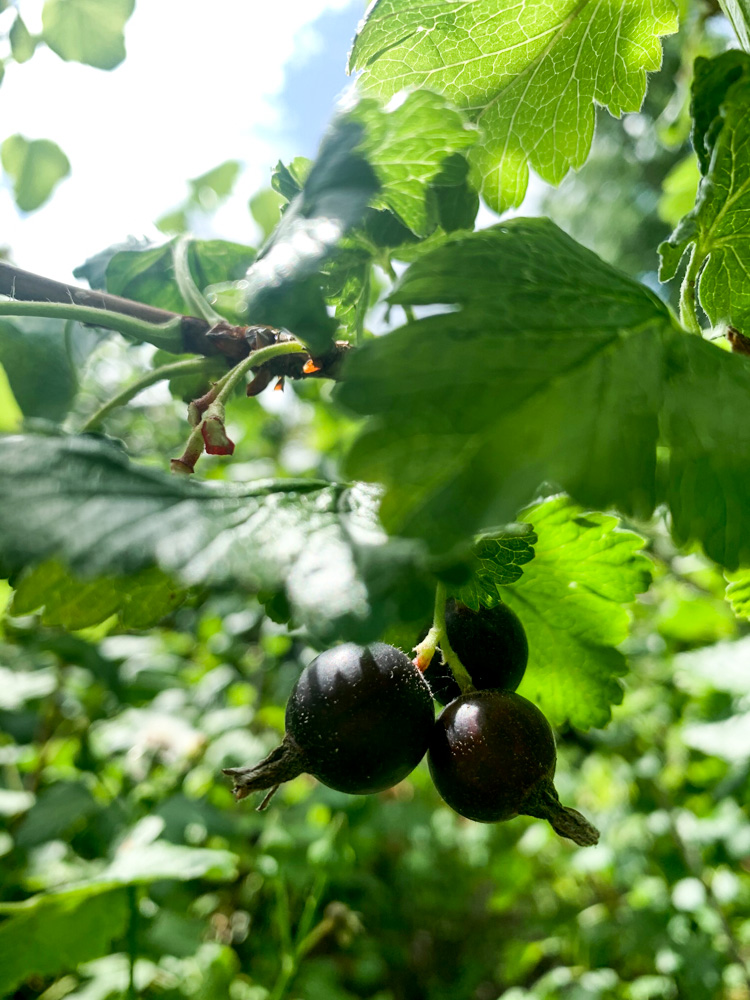 I’m all alone in another woman’s garden that sits empty in Chester, NS. Fat crimson gooseberries hang off the stalks, almost my height, along the edge of the garden. Raspberries grow in behind, at least three rows worth divided by spruce logs lashed together with old fishing line. Cornflowers, lavender and patches of daisies cluster at my feet.

I once met a man ‘from away’ who described Chester as a pretty little town, filled with cape cod houses and white picket fences, just like Nantucket, back in the 1950’s.  He’s not far off. Chester is a sailing community and New Englanders have been summering here for generations. Boats tethered to mooring balls are bobbing in the basin and wild roses line picturesque lanes. I can’t speak further to the history of this place; my mother-in-law relocated here just five years ago. But I do know that this year, with the border closed to Americans and the two week quarantine restriction whittling the town’s population down mostly to locals, this place is quieter and its gardens are overgrown.

I feel like an intruder, lingering among another woman’s things. But she told us to help ourselves. So here I am, picking quickly as I sweat through scratch-proof workpants. The birds were here when I arrived; they’re faster than I am. 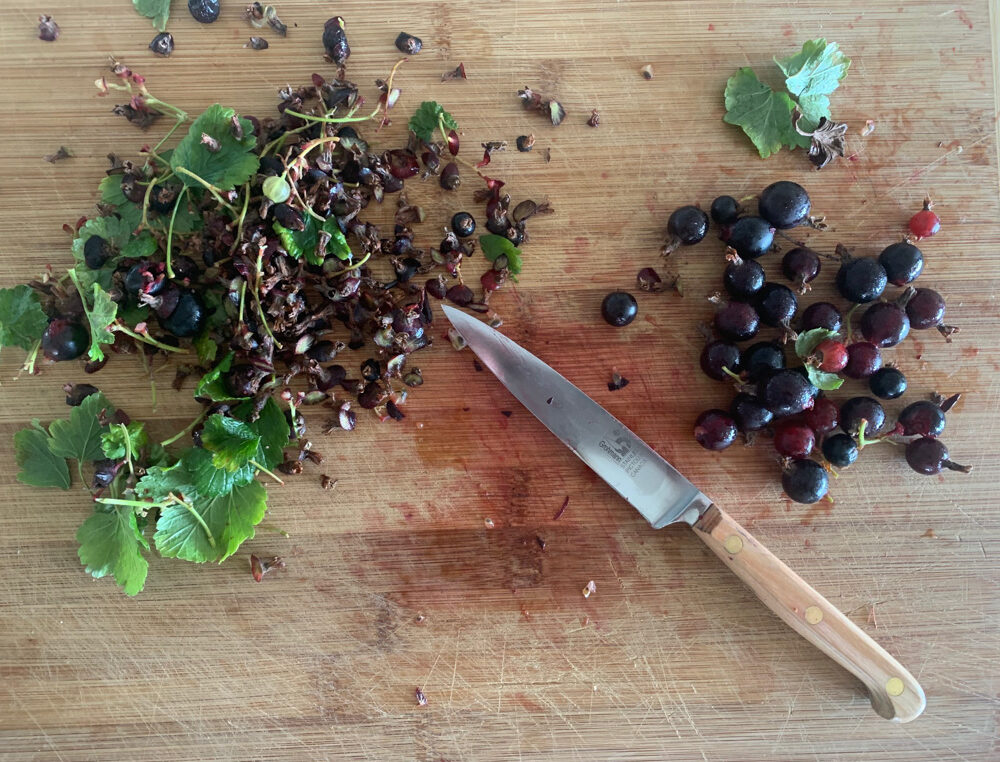 I don’t know gooseberries. My dad tells me my grandmother grew them to make jelly, my grandfather’s favourite. But their berry garden was gone by the time I came along. I thought gooseberries were green, but these verge on purple. Who knew there were multiple varieties. I grab clusters, three at a time, and put them in an old Tupperware. I pop one in my mouth with red, stained fingers: slightly sweet, with a very tart finish. A rhubarb and raspberry pie, kissed by the sun.

I bring them inside, wondering what this other woman would have done with these gooseberries. Instead, I ask my Instagram friends.

Jam. Jelly. Fool. Crisp. Cobbler. Chutney. Pie. Ice Cream. Something that requires a touch of sweetness to balance the sour.

When it comes to berries, mother always leans towards jelly. That way, you don’t have to top and tail, Linds. The jelly bag sieves everything for you. Make Jelly. But I am feeling ambitious, so I sit down with 4 cups of gooseberries, pick out leaves, remove stems and cut the little dried blossom off the end of each and every gooseberry. It takes forever. I wipe my brow; I’m heading down an ice cream path and can’t stop. I transfer the berries into a pot and add 4 tablespoons of sugar, about 4 tablespoons of water, and leave them to simmer until the berries begin to pop. I tip it all into a blender and whizz everything into a bright red pulp and strain it through a sieve. I wonder why I bothered to top and tail. Listen to your mother.

To make authentic ice cream, this is where one would make a custard. Stir slowly until it coats the back of a spoon. Whisk in the flavouring. But when you’re tired and hot, there’s another way. Pour the crimson liquid into a blender, add a can of sweetened condensed milk, and whizz it. Pour the mixture into a loaf tin, and if feeling fancy, marble the top with the remaining slick of sweet milk from the bottom of the can. Cover and freeze.

It’s sad she’s not here to enjoy it, but I won’t let her garden go to waste. 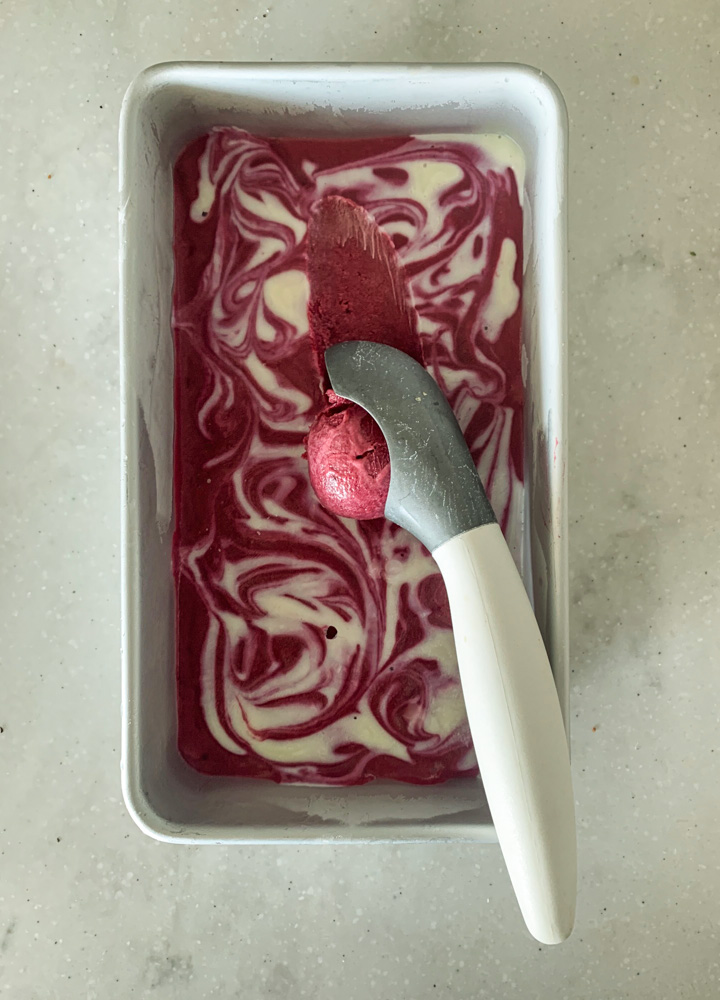 4 cups gooseberries, top and tailed, if you’re up for it
4 tablespoons sugar
4 tablespoons water
1 300ml (14oz) can Sweetened Condensed Milk

Place berries in a large pan and cover with sugar and water. Simmer over low heat, stirring occasionally, until berries begin to pop. Remove from heat and allow to cool a little.

Spoon berry mixture into a blender and blend until smooth. Strain mixture through a sieve over a bowl, stirring and pushing mixture gently to encourage as much liquid through the sieve as possible. Discard remaining pulp. Return sieved liquid to the blender, add sweetened condensed milk and blend until smooth. Pour mixture into a loaf pan and top with any remaining sweetened milk in the can. Using the tip of a knife, marble the creamy white through the red.