By Lindsay Cameron WilsonFebruary 2, 2022No Comments 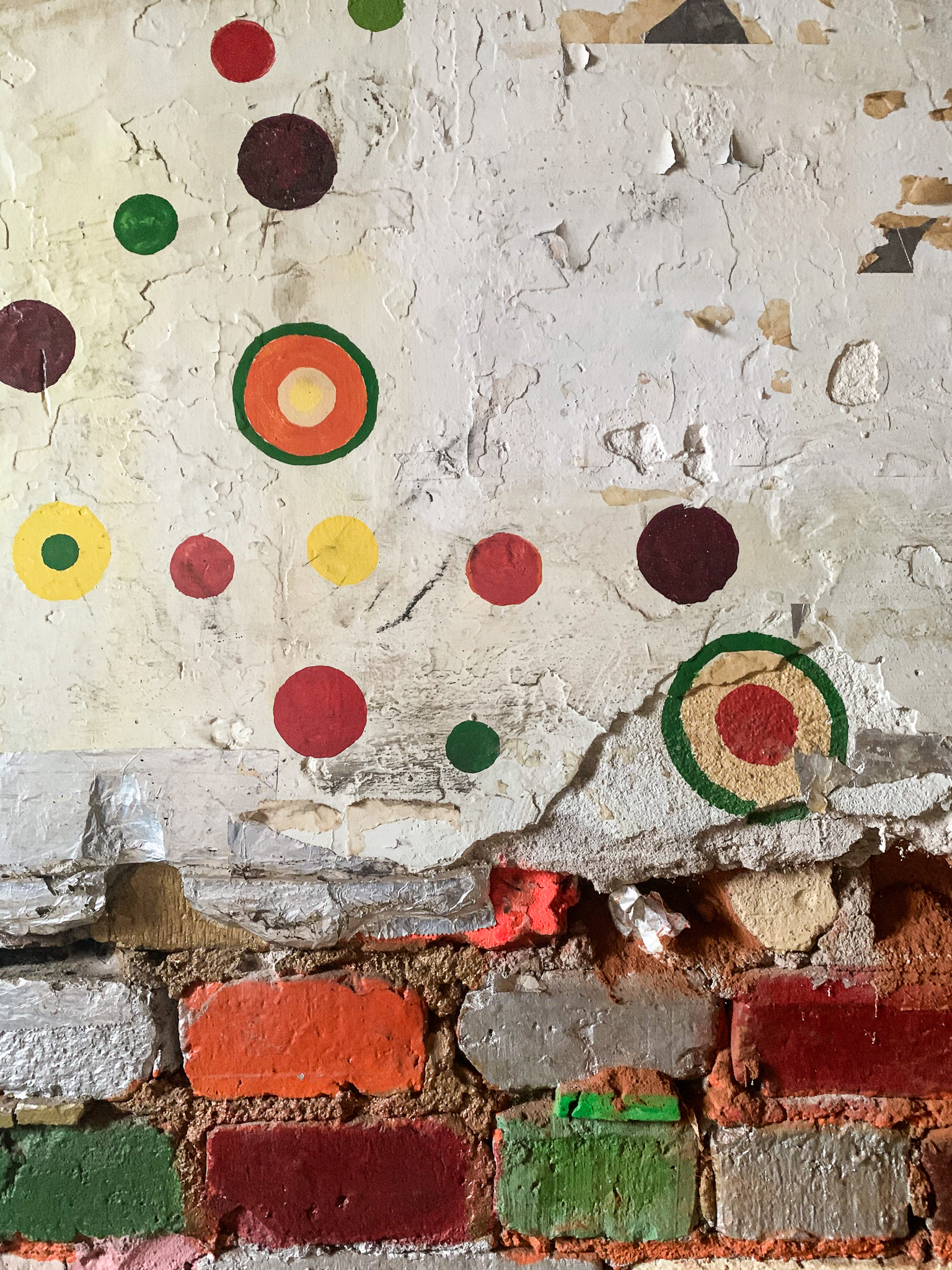 When we first moved into our 1850’s house on Morris street, the basement was a series of odorous rooms with unknown functions. There were clues of previous life here and there – a paint splattered sink set in caramel-coloured formica, peeling floral wallpaper around an old hearth, and a gangplank over a dirt floor leading to the back door. We found a Chinese newspaper under the wooden slats from 1962. Someone had lived in this basement.

This ‘someone’ had fun with the small, south facing rectangular room where we stored our bicycles. Geometric golden shapes were painted on the drywall that ran down one side of the room, and the bricks and plaster on the opposite wall were covered in colourful circles and blocks of green, red and silver. The window ledge was an open wound, revealing the slate foundation and decades of crumbling rock and rubble. By the door was a piece of wood covered in tiny notches, as though someone had been locked in there, quietly counting the days.

This room is now the laundry room, my favourite room in the house. If it wasn’t for children in need of the toilet, sink and shower opposite the washer and dryer, I could hide in there all day. Today I washed a load of whites and hung them from the laundry rack suspended from the ceiling. The fabrics caught the morning light, like a giant pasta rack loaded with sheets of fresh lasagna noodles. I also saw paper-thin ribbons of rutabaga* pasta like the kind I ate at Olmstead in Brooklyn. I was with my friend Eshun, a year before the pandemic began, when we were free to sit at a crowded bar on a late winter’s day, twirling strips of this magical vegetable pasta coated in a buttery sauce, shaved truffle and a pile of crunchy brown-butter bits. A humble, gnarly vegetable transformed into something beautiful, just like this laundry room.

Before and after images scratch an itch. They’re immediately satisfying. They reveal unseen potential. They deliver on the promise of change, of improvement. But what they don’t show are the steps it took to get there, the interesting parts, the in-betweens…

Like our first little flat in the attic of a brick house in London, where a front-loading 2-in-1 washer/dryer sat in our tiny kitchen beside the window. When we first moved in, the waste water from the sink flowed, erroneously, into the washing machine. I discovered this one day after scrubbing a cocotte coated in burnt bolognese, then later watched as bits of charred tomato swirled with my socks and undies, around and around. While waiting for a plumber (for weeks, maybe months) I took our clothes to the laundrette around the corner. If I timed it right, I could have a full-English breakfast at the café next door while the laundry tumbled dry. When the weather was nice I’d sit at a table outside and sip a milky coffee between forkfuls of roasted mushrooms dripping in bacon fat. Men in popped collars and faded skinny jeans hung out in the doorway of a taxi stand across the lane, bantering in a language I didn’t recognize, smoking cigarettes I’d never smelled before. After breakfast I’d walk through their haze with my laundry stuffed into an Ikea bag, and later when stretching the clean sheets across the mattress, I’d catch a touch of tobacco and a hint of diesel. Better than burnt bolognese, I’d thought.

The steps it takes to transform a rutabaga into swirls of pasta isn’t easy. When in season, Chef Greg Baxtrom at Olmsted buys rutabaga at the Union Square Green Market by the garbage bag full, mainly because they’re affordable, organic, and the farmer often has a surplus to offload. Back at the restaurant, they’re run through a Japanese sheeter, a large gadget that transforms vegetables into smooth continuous sheets of never ending lasagna noodles. I don’t have a sheeter; I used to have a spiralizer, but it was lost in the renovation. Thankfully Value Village had one, so I took it home, cleaned it up, peeled a two pound rutabaga and tried to attach the big, weighty ball to the spiralizer. Well. I wrestled. I twisted, I almost broke the thing. Eventually I ended up with a single serving of swirls, enough, at least, for just me to enjoy. I cooked them in a pan and topped the sweet, sautéed pasta with garlicky, buttery, sage-y breadcrumbs. I took the bowl downstairs to the laundry room and sat on the counter under the south-facing window. It wasn’t Brooklyn, Eshun wasn’t there, but that bowl of rutabaga was very, very good.

Two months before, water was exploding from the ceiling, just above my head; a pipe was pierced during the laundry rack installation.

Such are the in-betweens of life.

*Rutabaga – also known as Swede, Wax Turnip or Neep in Scotland.
Rutabagas and Turnips are very similar – both are members of the cabbage (Brassicaceae) family- but rutabagas are slightly sweeter than turnips and turnips are more ‘radishy’. Turnips are have an ombre, white to purple skin, while rutabagas fade from yellow to rich brown. 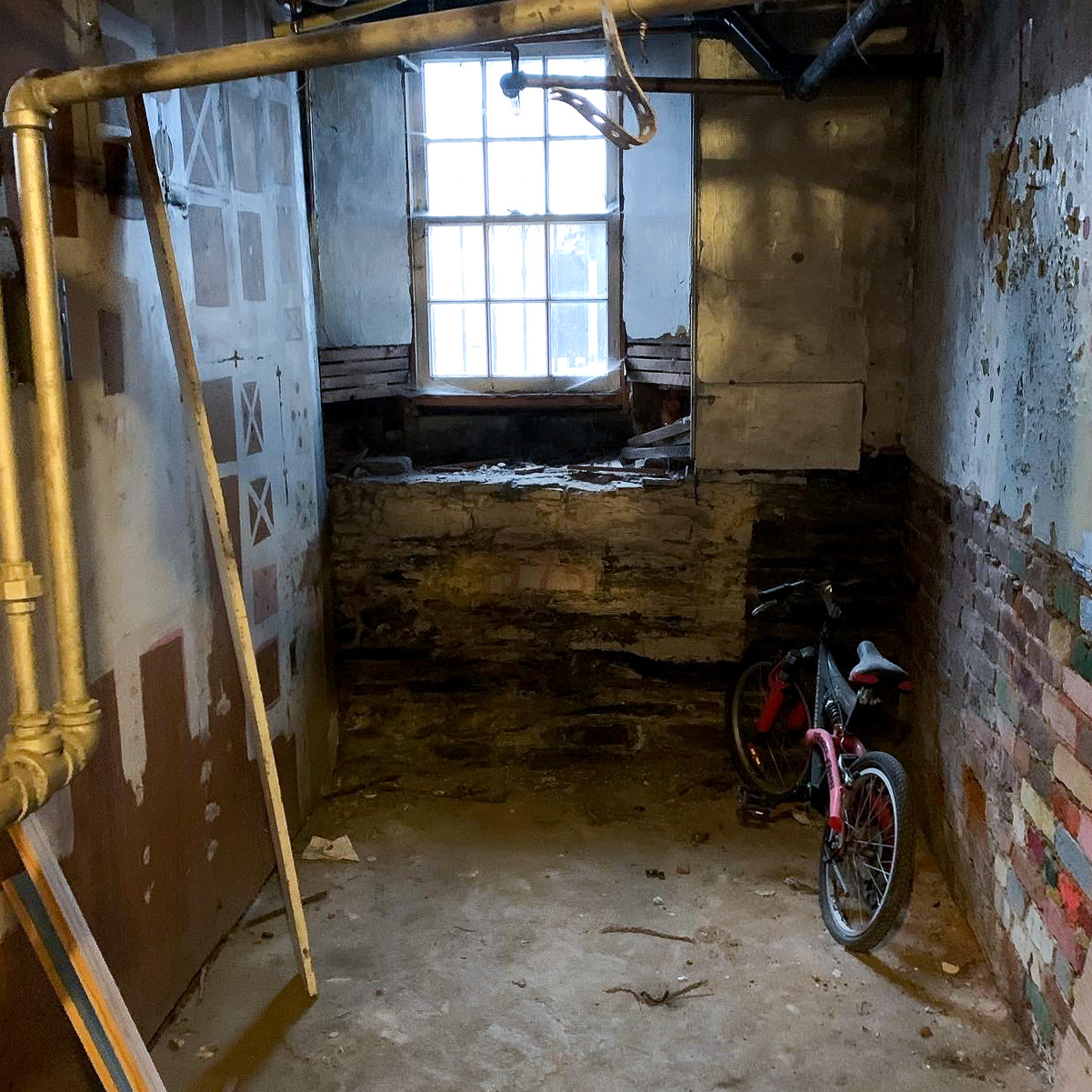 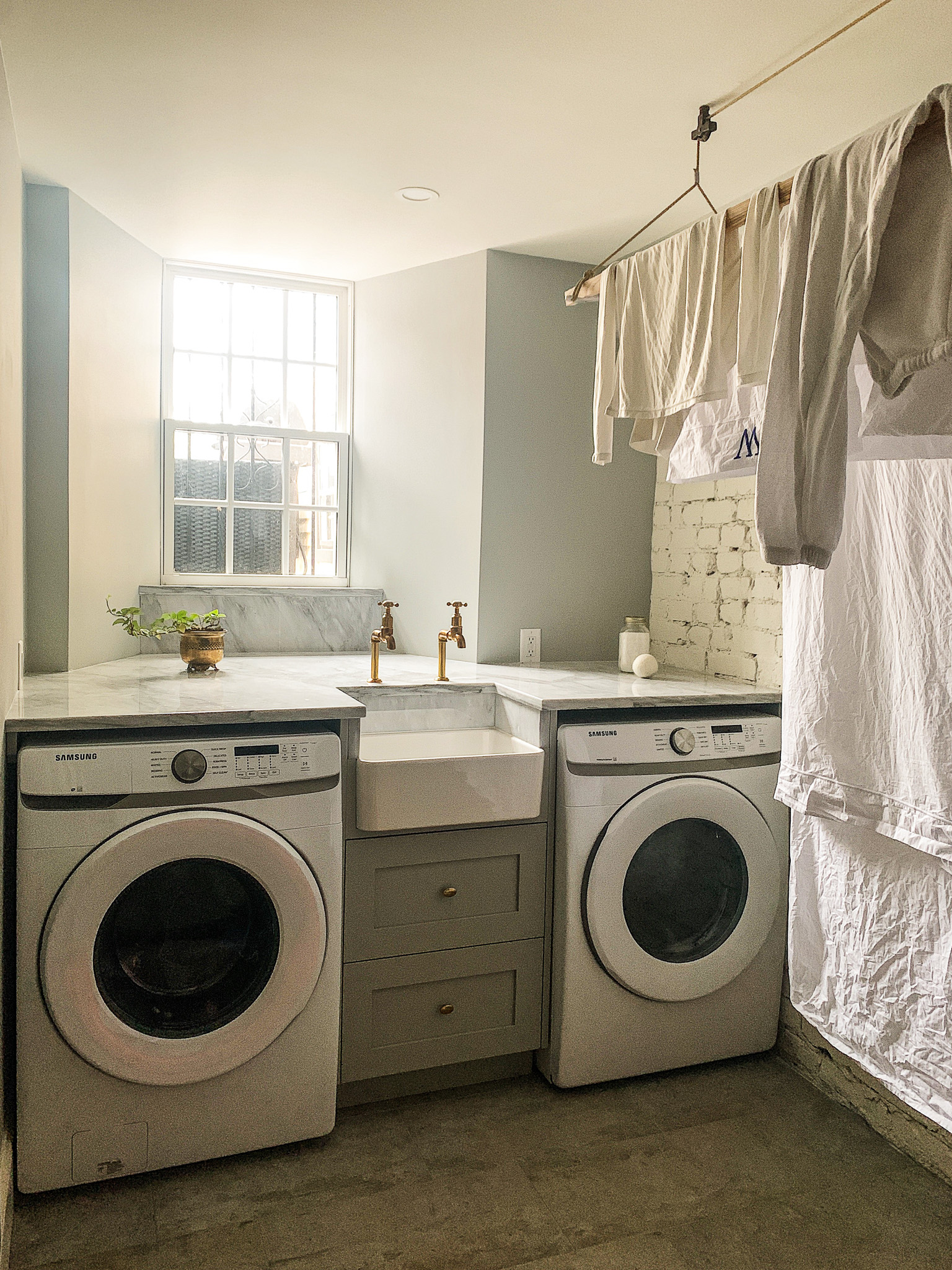 Rutabaga Pasta, in the Laundry Room, For One

Heat olive oil in a fry pan over medium heat. Add pile of spiralized rutabaga and a pinch of salt. Sauté gently, turning with tongs, for a few minutes until the ‘pasta’ brightens and softens a little, then add water, turn down the heat and cover. Leave to simmer for 3 minutes, or until water has evaporated and pasta is tender.

Meanwhile, in a small frypan, melt butter gently over medium-low heat until it froths, but don’t let it turn brown. Add minced garlic and stir for a minute or so, trying not to burn the garlic. Add sage leaves and breadcrumbs, and stir until leaves become crispy. Toss mixture through ‘pasta’ and add a pinch of sea salt and pepper to taste.