By Lindsay Cameron WilsonFebruary 19, 2022No Comments 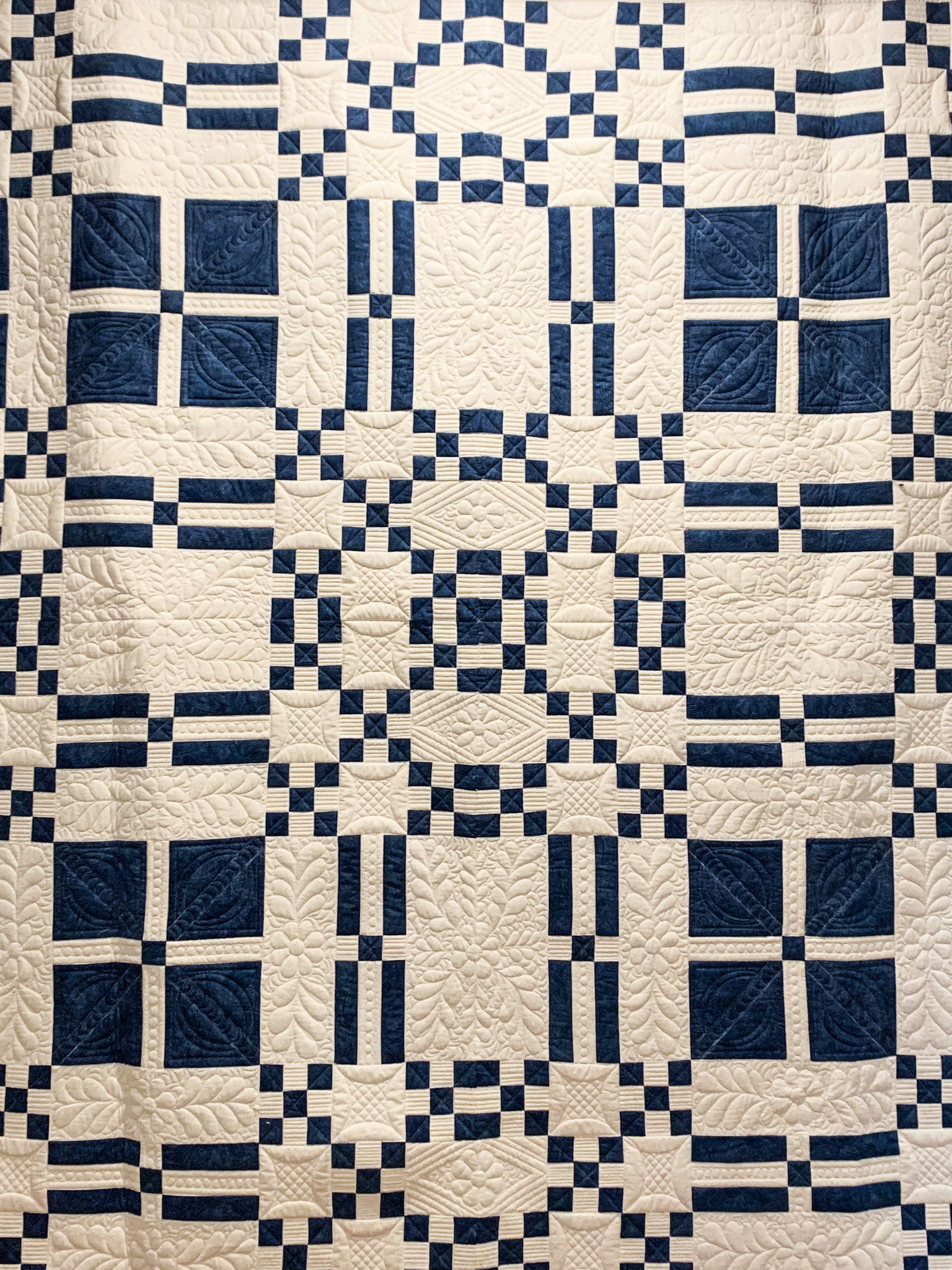 I can see a patch of grey through the crack in my shutters. Flakes of icy snow are falling so hard, so fast, I can’t even see them. I don’t want to get up. I feel like Toad, tucked under his quilt, telling Frog to “wake me up at half past May.”

My quilt is made of crisp white cotton covered in squares and rectangles of rich blue. I’ve laid it over an old white duvet, and when I’m tucked underneath, it feels like I’ve been covered in a weighted blanket filled with glass beads, the kind designed to make the body feel calm and secure.

I bought it last fall from a quilter in the Margaree Valley, but hid it away until Christmas. The tag simply said, ‘The Coverlet Quilt.’ Maisie Dobbs, the intrepid 1930’s fictional English Private Investigator, always has either a coverlet or a counterpane on her bed. I picture Maisie returning home after a day of solving crimes, slipping off her shoes and reaching for the decorative layer to cover her body as she naps. An extra layer of beauty and function.

The artist who made my quilt, Anne Morrell Robinson, told me the design was inspired by antique overshot / undershot weavings, where two different types of weft yarns and floats are used to create a pattern. I am new to quilts, but in this one I see symmetry, geometric shapes, order and comfort.

Still under the quilt, I hear ‘fee-bee,’ the clear call of a chickadee calling from a frozen branch outside my window. I always thought this call was a sign of spring – hadn’t I heard it walking home late (or maybe early?) from university parties, just before spring exams, saying, yoo hoo, you’re late! So how could it be, a spring call from a chickadee perched on an icy branch, scratching against the window? A quick under-the-quilt Google tells me it is the dawn call of a high-ranking black-capped male chickadee, calling to defend his territory; it has nothing to do with the seasons. Further research reveals this call is not to be confused with the three note black-capped female chickadee call ‘hey, sweetie,’ or the ‘broken dee,’ asking for a male to come and bring her some food.

I laid there, practising my call. Hey sweetie!

Downstairs in the kitchen is an Ina Garten cookbook called Cooking for Jeffrey. It’s a collection, as the name suggests, of Ina Garten’s husband’s favourite meals, made by Ina. I pulled it out recently, after Reece Witherspoon asked her Instagram followers to share their daily habits for the new year. She offered:

-start the day with a big glass of water
-get 10 minutes of outdoor light
-spend 30-60 minutes reading without distraction everyday
-in bed by 10. *no late night TV binges. Try to get 8 hours of rest!

Ina must call to Jeffrey for a coffee from under the quilt. How else can she stay in bed playing Sudoku? And Jeffrey must have a call for Ina; there are over one hundred recipes in that book, all for him.

Today I called for Ina’s brisket with onions and leeks. She says her recipe is based on the most Googled recipe, ever, and I had all the ingredients. Instead, my Jeffrey brought coffee. That’s ok; I played wordle while I sipped, and thought about brisket. It would need time to rest in the refrigerator after a good salt. Onions and leeks needed chopping, the brisket needed browning, then the whole thing would go into the oven for a long braise in wine and beef stock. I’ll serve it with mashed potatoes and something green, perhaps the broccoli in the back of the fridge.

Then I’ll crawl back under the quilt, and call for someone to wake me up at half past May.

Now I bring you Ina Garten’s Brisket with Onions and Leeks, because there’s no better version.