A Story About Rose, Mini Skirts and Kitchen Scissors

My in-laws, Rose and Peter, bought an old farm house near a ski hill in 1970. They had two small boys at the time. Rose remembers corralling them between the unlit fire place and the fire screen with a pile of fischer-price so she and Peter could get on with repairs. They wallpapered the rooms, put in a tin shower, and turned an old door into a kitchen table. They dug a vegetable garden and swatted at blackflies. In the winter they skied while the little ones were watched by the neighbour, Mrs. Rushton. My husband remembers his GI Jo army guy melting on the wood stove in her kitchen.

Eventually more boys were born, and they all had children of their own. The upstairs back room, once carpeted in wall to wall red shag and covered with mattresses, wasn’t cutting it anymore. The cowboy wallpaper eventually started to curl. The tin shower, just inches away from the kitchen sink, dripped, dripped, dripped. Mice had made condos in the mud basement.

When Peter died, Rose knew it was time to make some changes. She had plans drawn for an extension. The house was lifted off the ground and a foundation was poured. New bedrooms were added. The tin shower was replaced with bathtubs and showers. The mice remained, but they were discrete.

A large island now sits in the kitchen where the old, table-door used to be. In the corner of the island is a drawer, filled with twine, tin foil, and a pair of old kitchen scissors.

One evening this winter, as we were making a post-ski dinner, Rose opened the drawer and declared: “If I drop down dead tonight, I want you all to know about these scissors.”

Rose met Peter at the University of Birmingham in 1963.  She was a secretary in the Engineering Production department. Peter was a Canadian Athlone student studying at the university. Rose’s mother was Canadian; they discussed his accent, she invited him to meet her mother, who “would love to hear a Canadian.” Despite an unchivalrous journey rolling around in a pencil skirt in the back of his mini panel van, the two hit it off.

When his year was over, Rose decided she too would head to Canada. Peter would take the boat back, as he had arrived, and Rose would follow later by plane. She would visit Peter in Nova Scotia, initially, but continue on to visit cousins out west, by train.  “She was too young to get married,” I remember Peter once saying.

There was room on the boat for Peter  to take one trunk for Rose along with his own luggage. She had little time to choose what to take. This could be forever.

Over the years we’ve heard the stories of Rose stepping off the plane in a mini skirt and thigh high boots. How she bought sherry at the liquor store for Peter’s father, even though no woman ever had set foot in a small-town Nova Scotian liquor store before. So what did this sassy lady pack in her tin trunk?

2. A pair of pinking shears.

4. A selection of sheet music – Gilbert and Sullivan Operas, Handle, Schubert and Mozart

The tin trunk, with her name carefully stencilled in white by her father, now sits in her garage. The sheet music is still in there. The stamp collection is somewhere in the house. The pinking shears are in her sewing basket, and the other scissors, well they’re in the top drawer of the kitchen island in the farm house. 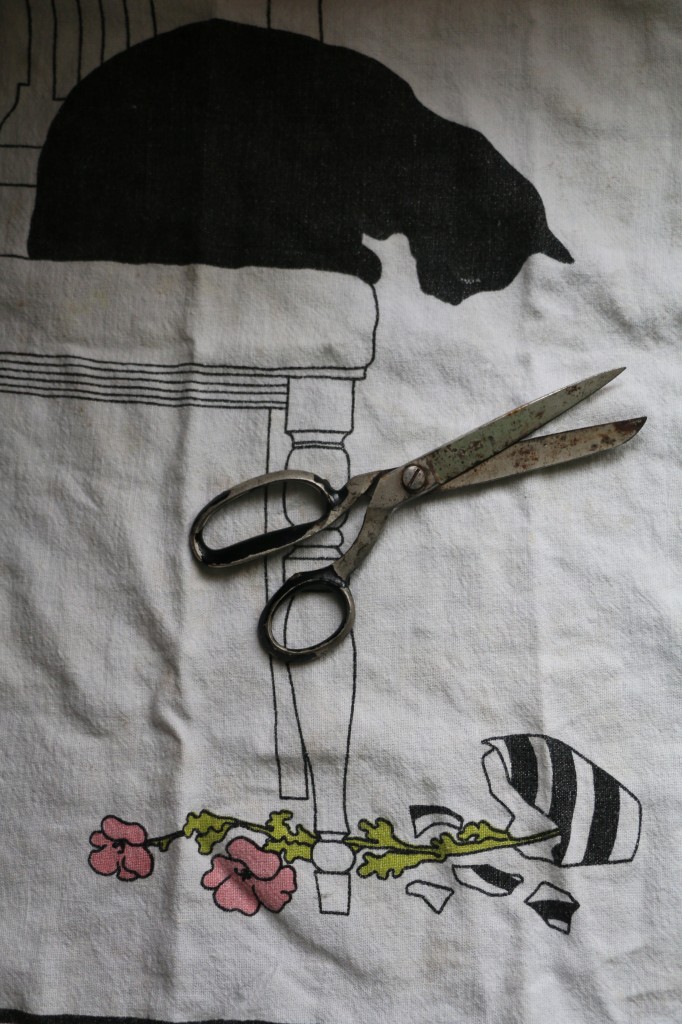