White pumpkins, butternut squash and a tangle of emotions

By Lindsay Cameron WilsonOctober 23, 2017No Comments 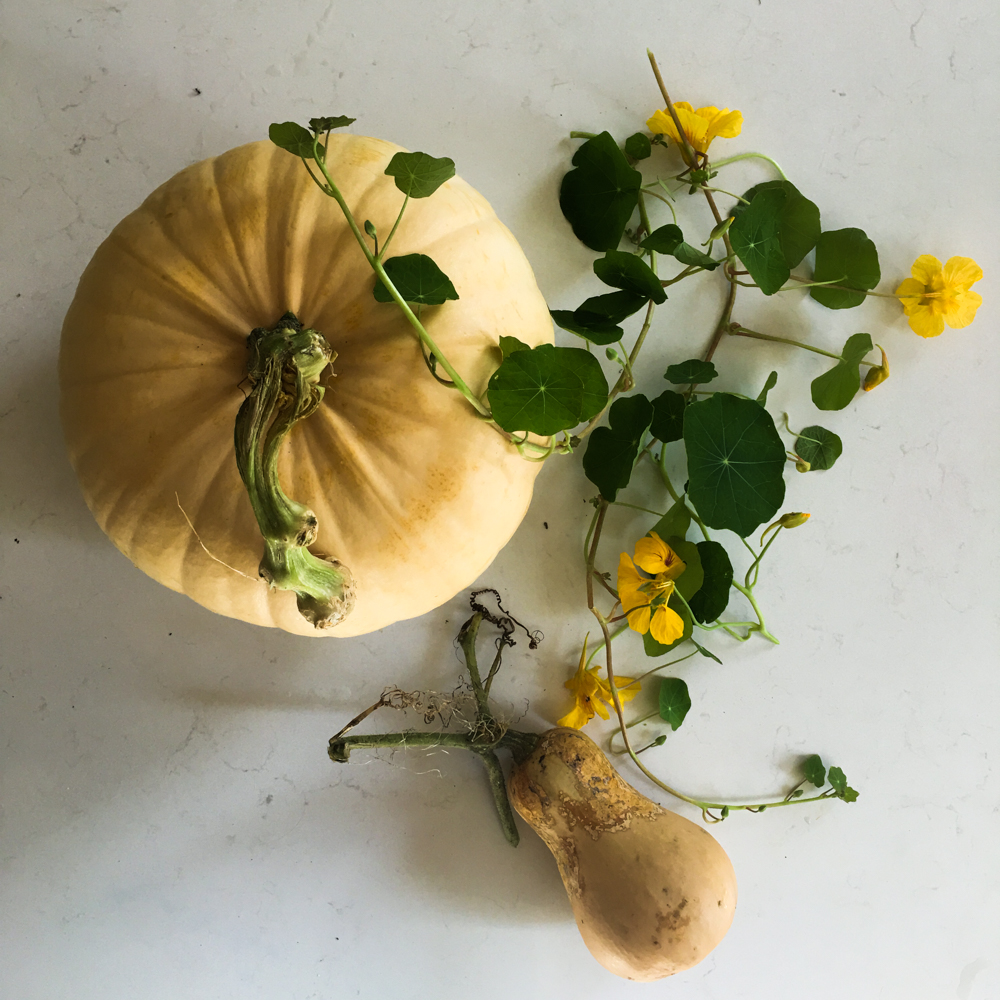 I had just turned fourteen when my little sister got us kicked out of a movie theatre for excessive crying.

Ms. Valens was hanging her laundry on the line when she heard the news. Her son, Ritchie, was killed in a plane crash, along with fellow performers Buddy Holly and J.P. Richardson. She fell to her knees in slow motion, clutching her wet clothes against her chest. That’s when we heard the first tell-tale gasps followed by the inevitable – a giant, horribly audible WAAAAAAA.

How could Ritchie be dead? It was all too much for my eleven year-old sister to bare. And it was her second time seeing the movie!

Our Dad was horrified. He leaned over and shushed her as our mother and the rest of us slumped into our chairs. All six of us were sitting in the front row; La Bamba was sold out that night. Soon an usher appeared. We’d have to leave the theatre if my sister couldn’t control herself, he shout-whispered between her sobs.

Fast forward all these years, and this time, it was me. But I was sitting in my living room in the dark, season 4, episode 12 of the Australian show Offspring playing on my laptop. My tears were more of a hick-up than a WAAAA, but the sentiment was all the same.

That’s when the doorbell rang.

We live on a busy street. There isn’t a peephole to spy on people behind the door, so I opened cautiously, eyes puffy, nose running.

Standing on the stoop was our family friend Jessie with a creamy white pumpkin in her arms. It was a sugar pumpkin from her mother’s garden, she said. Would I like it? It won’t be watery like a jack-o-lantern, she said. Why not make a pie and we can share it?

I brought the pumpkin in and sat it down. The thought of a creamy pumpkin photo shoot, inspired by littleupsidedowncake cheered me up. Yes – something to showcase its gentle colour and long, bent handle. Something to take the pain away.

The next day I walked the pumpkin around my house, looking for that perfect white backdrop. I found ripped up drywall in our old kitchen. Lots of cupboards and textures in the new kitchen. Darkness in the living room. Persimmon in the hallway.

I settled on the bird’s eye view of the kitchen counter. That’s my happy place. But the pumpkin was lonely. I went outside and rummaged around in the garden. There are hydrangeas in there, the mulberry, a few new perennials and baby lavender plants, all surrounded by a twisted tangle of squash vines and nasturtiums. It’s wild. My friend and gardening guru Piia suggested I plant squash in an attempt to fill in some holes. I thought I was planting zucchini, even through the summer as the blossoms came and the fruit began to develop. When they turned out to be yellow, I assumed they were summer squash. I’m new at this.

But then a gentle bulb formed at the end of the fruit. I had a happy crop of butternut squash on my hands, growing just about everywhere. So I harvested a few and brought them inside. A tangle of nasturtium flowers and leaves came too. They were interconnected.

I took pictures when I was supposed to be making a pie. I wasn’t ready. I hack into jack-o-lanterns once a year on Hallowe’en, with newspaper spread across the table and a drill in hand. When I make pumpkin pie, I use canned pumpkin. There, I said it. It’s just so easy. And besides, you rarely see an edible pumpkin around these parts. This one is the exception. But I was too melancholy to tackle it. Tomorrow I’ll make a pie Jess, tomorrow.

Instead, I cut the less intimidating butternut squash into cubes, tossed them in olive oil and a pinch of sea salt, and roasted them until caramelized and tender. I sautéed rings of red onion in a pan then added balsamic vinegar, a pinch of brown sugar, salt and pepper. I simmered it all down until everything was thick – a warm, comforting vinaigrette of sorts. I sliced a bunch of rainbow chard and half a red cabbage and stirred them into the sticky sauce, wilting the greens and cabbage with each stir. I tipped the tangled mess onto a plate and finished it off with cubes of roasted squash, some seeds and mint leaves. The recipe is a modified version of a salad I used to make when living in London, developed by my friend Jennifer Joyce. (You can find the original here). It’s the perfect fall salad – simultaneously aromatic, nourishing, and glam. Perfect for a lunch with a potentially tearful sister.

Australian friends, this is where I need you. Do I tell my ‘easy to bawl’ sister what happens in season 4 of Offspring? She’s a few seasons behind. My older sister, who cried along with me, thinks it’s our duty to warn her.

We don’t want to have another La Bamba situation on our hands. 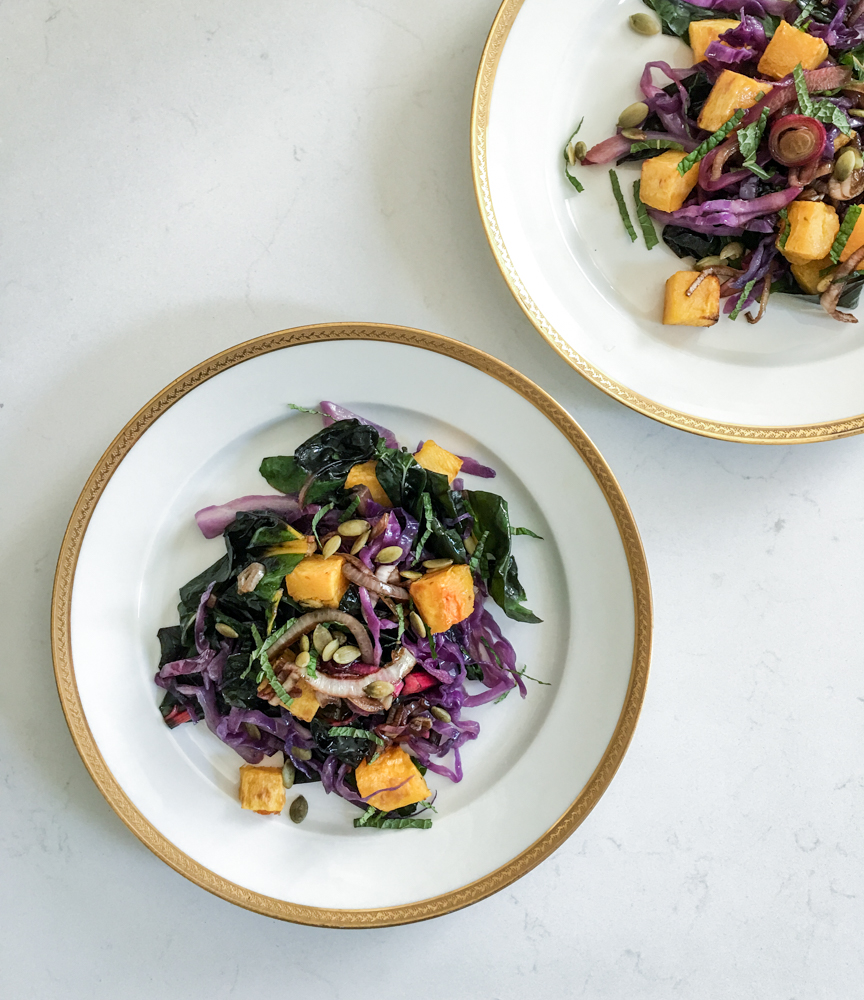 PS:
1. I can’t speak highly enough about the beauty of the 5-8pm birthday cocktail party. It was full-on fun, then poof, everyone was gone. I was cleaned up and bawling in front of Offspring by 10pm!
2. Violet Bakery’s Chocolate Devil’s Food Cake with Salted Caramel Icing could possible be the best cake I’ve ever made, if I do say so myself.