By Lindsay Cameron WilsonDecember 7, 2018No Comments 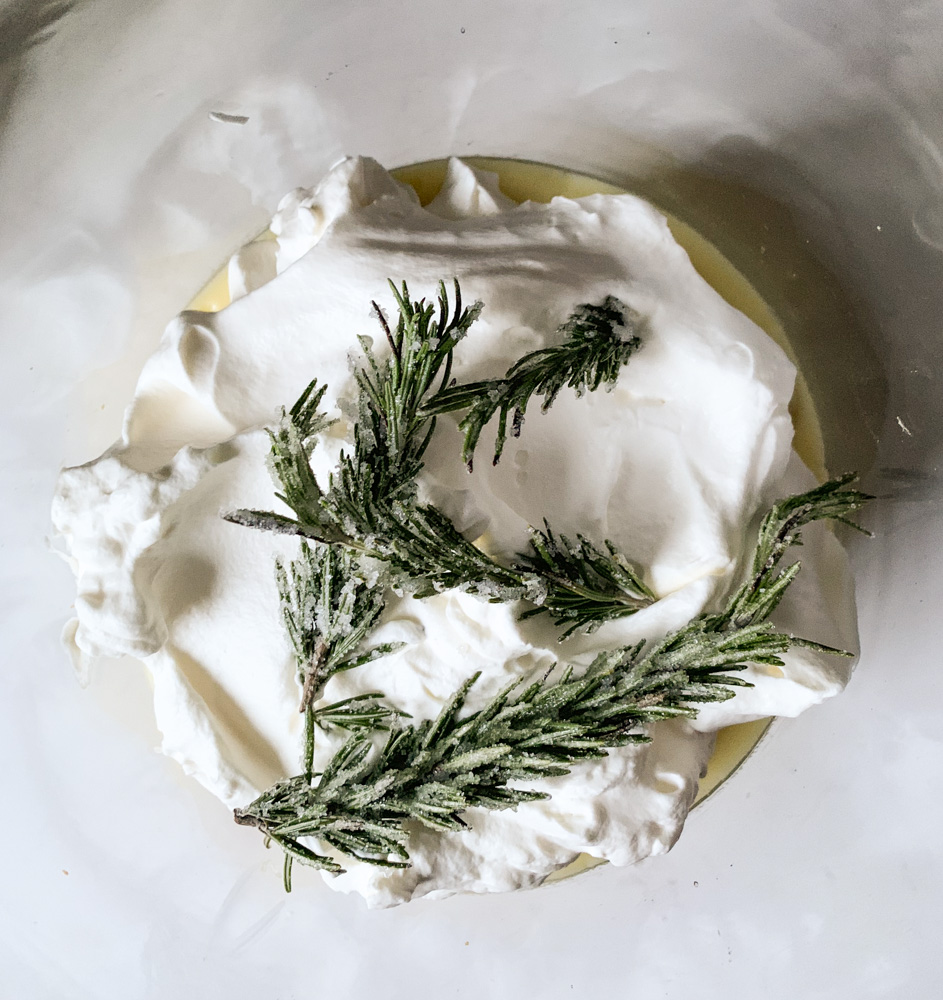 I didn’t grow up eating trifle. We lived in the South when I was little, so my mom folded southern classics into our holiday repertoire: pecan pie, lemon chess pie, chocolate chess pie… and they became our traditions. For me, a trifle was something my paternal grandmother told us never to cry over. “Now that’s a trifle,” she’s say when one of us would whimper over a skinned knee or hurt feelings. If only I knew about the dessert at the time; layers of cake, cream and custard would have been the perfect comfort.

Lately trifles, the culinary kind, have been popping up in my world, from Australian pastry chef Nadine Ingram’s Instagram feed, to Nadiya Hussain’s Eating In column in The Times Magazine. And woven into the layers of sponge, syrupy fruits, custard and garnishes that constitute a trifle is the debate over whether jelly* belongs in this mix. As it turns out, people have been passionately debating jelly in trifles ever since Hannah Glasse included a jelly-based version in her eighteenth century cookbook The Art of Cookery. Nadine likes jelly in her trifle, but her husband doesn’t. Nadiya is in camp jelly, while Nigel Slater isn’t. I suppose none of this is surprising. In The Christmas Chronicles, Nigel Slater writes that people are very fussy about trifle, possibly more so than any other dessert. “I know those who throw a tantrum about the tiniest detail,” he writes. “And so they should.”

This debate intrigued me. I am working on a future podcast episode about the history of Jell-O, so naturally all things gelatinized are on my mind. And throwing a tantrum over a trifle? It all seems so diva, so excessive, so necessary to try.

And speaking of divas, Slater goes on to say “as befits its name, trifle should be adorned with frivolities, like crystallized fruits, toasted almonds, sugared flowers, in keeping with the spirit of the recipe… I like crystallised rose petals or crushed praline on mine… Whatever you choose should twinkle like a tiara.”

So in the spirit of curiosity and complete naiveté, I started with the tiara: crystallized rosemary (because I had rosemary in the fridge and pears on the counter, and I like the two flavours together. I also had a big Italian pandoro, the cake-like bread I buy this time of year because I love its box.  All perfect layers for a trifle I thought, smugly.) But back to the tiara. A quick google told me that Martha Stewart ‘sugars’ her rosemary by:

So that’s what I did.

While the rosemary was drying, I realized I didn’t have a trifle dish. High-sided glass to showcase the layering components is essential. But I didn’t cry, I just went over to my British-born mother-in-law’s as I do for all my English-inspired needs. Naturally, she had three to choose from.

Once home I merged a few recipes together on paper:

It would be an incredible layering of winter sweetness, pillowy cream and a touch of savoury sparkle.

But after I made the pear jelly and set it aside to cool, I noticed a small, hairline crack in the base of the (borrowed) trifle dish. I didn’t have time to go get another; my jelly would set in the pan! So I closed my eyes and poured the warm (and not very pretty beige) mixture into the dish. And as I stood there, biting my bottom lip, I heard it – the tell-tale sound of a frozen pond cracking that Canadians know so well. Hot liquid on already cracked glass, as it turns out, sounds exactly the same.

In my panic, I scanned the room and spotted a big glass vase on the mantle. I ripped out the arrangement, rinsed it out and tipped the warm jelly into the vase. It was twice the height of the trifle dish, but it was glass – the beauty of the layering would not be compromised.

Once the jelly was set, I added cubes of cake. Then I added the pears I had simmered in a rosemary syrup, followed by a thick, rich yellow custard. It was now time to let the whole thing set – 6-12 hours, the experts said. But my 32cm high vase posed a problem- I’d have to take a shelf out of the fridge. I tried to hold back a tantrum, until I remembered Nigel Slater’s words… “I know those who throw a tantrum about the tiniest detail. And so they should.”

So I let it all out.

The next day, when I was calm and cool again, I made whipped rosemary cream and using my longest spoon, I lowered pillows of cream onto the surface of the trifle. I crowned it all with the tiara: crystallized rosemary that twinkled in the late afternoon sun.

But as I stood back to take it all in, I found myself chewing my lower lip, once again. I had made a creamy, tone-on-tone terrarium housing a cross-section of layers beneath and above the frozen ground: regolith, subsoil, topsoil, snow and trees. There was no luscious beauty to this trifle, no frivolity, no jewel-toned fruits poached in wine, no Australian summer berries so colourful and ripe this time of year. Just a frozen tundra.

So with that warning, I give you my trifle: down the barrel of the vase, a romantic cross section, a straight view, and my youngest son, digging in, using the longest spoon in the house.

*Jelly, for my fellow North Americans out there, doesn’t refer to the jelly we spread on toast, but the non-processed version of what we call Jell-O. 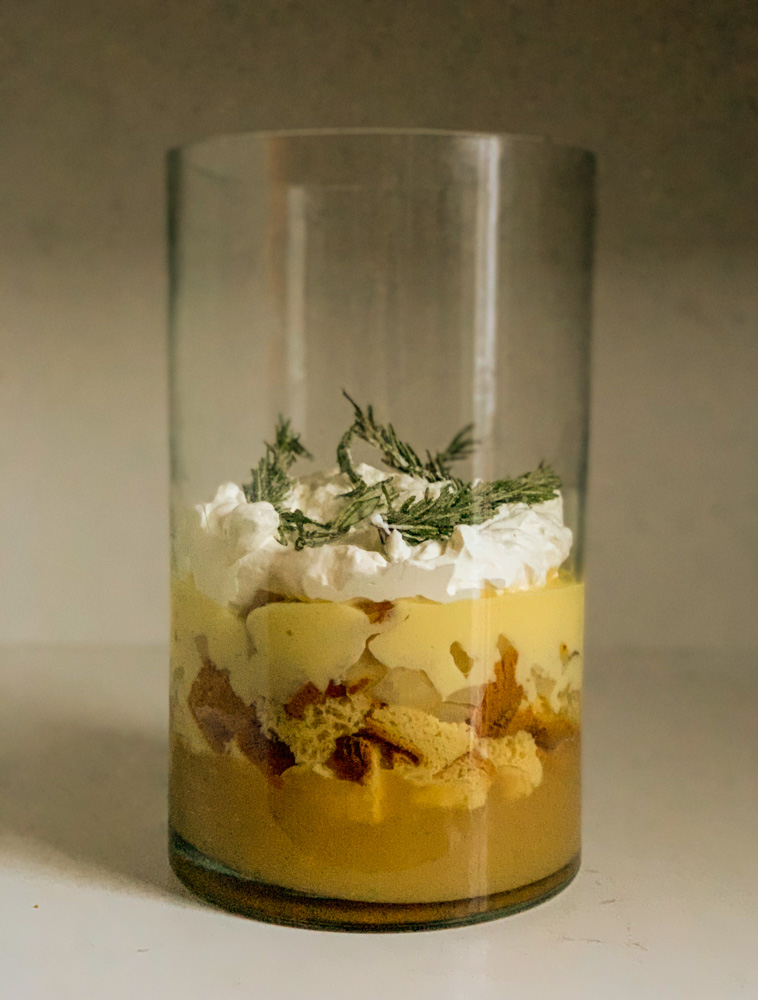