By Lindsay Cameron WilsonNovember 1, 2018No Comments 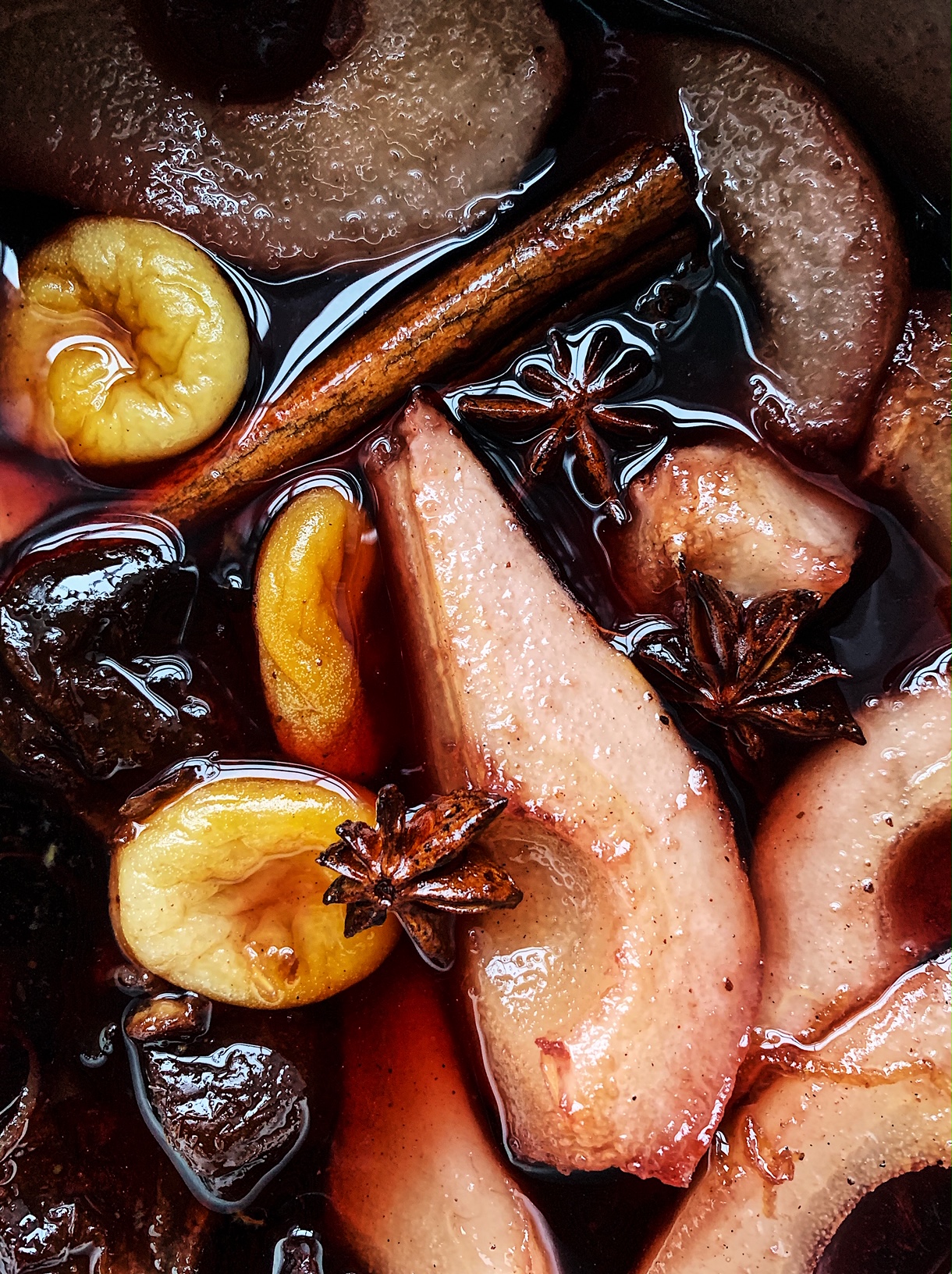 I spent the morning on the edge of the Bay of Fundy foraging for periwinkles. We had to pull shells away from the rocks as quickly as possible –  the tide, the highest and fastest in the world, was licking at our feet; these rocks would be covered in just a few minutes. The periwinkles echoed as we dropped fistfuls into the communal tin bucket.

Behind us, slightly sheltered from the wind, one of our guides was building two fires- one of dried seaweed and pine needles to steam mussels, the other to steam the periwinkles. He covered the bigger fire with a grill and placed a pot on top. He dropped the periwinkles into the pot, then placed thick slices of bread on the grill. We’d need toast to sop up the buttery broth.

We ate the periwinkles with toothpicks, watching the raging tide crash up against the beach. The wind was whipping at our faces, so I crouched down close to the periwinkle pot, beside the smoky heat of the fire*.

I poached pears in sweetened red wine and steeped apricots and prunes in tea. My father loves the smokiness of Lapsang Souchong tea; I’m on the fence. The leaves are smoked-dried over pine needles, which seems the perfect method for cooking mussels but too savoury for tea. But I keep it on hand for my Dad, which is why I was happy to try this recipe, one that uses just enough smoky tea to plump up dried fruit.

It’s an Alastair Little recipe. When I lived in London he had a popular restaurant in Soho, another off Ladbrooke Grove, then later an Italian deli on Westbourne Grove. I’ve heard he lives in Australia now, and all I have left of him is this recipe given to me by cousin Betsy, who lives near his old (and dearly missed) deli.

I made the compote as a gift for my friend Andrea. It’s her 50th birthday this weekend. She said no gifts, but I think I can sneak in a glorious jar of fruit swimming in a rich, red liquid. I imagine her spooning the poached fruit over pillowy yogurt, cake, or even with her morning oatmeal. She’ll want to hear the story of the recipe then she’ll ask about my week. Andrea is that kind of friend.

I’ll tell her is was a good week: bonfires, a warm buttery snack by the ocean, fruit poaching in my kitchen and the release of a new episode of The Food Podcast. The episode is part of a new mini series called Side Dishes exploring the flavours of home. If my hair is any indication, smoke, cinnamon and Bay of Fundy spray is the flavour of my home. Last week it was challenges at school with all three children with chicken soup swirling in around them. Who knows what next week will bring.

I’ll ask her the flavour of her home, a place filled with art, photos on the fridge, piles of library books and jars of blueberry jam.

But I also want to know, what’s the flavour of your home?

PS I don’t usually spend a Thursday foraging for periwinkles. I was on a film workshop with Kevin Kossowan, an Albertan who has made a career hunting, fishing, foraging and making films about it. The workshop was part of the Devour Food Film Festival.

PPS Questlove, the subject of my last newsletter, has unfortunately cancelled his appearance at Devour. Jimmy Fallon needed him or something…

PPPS any Australians out there know if Alastair Little has opened a deli in Australia? If so tell him cousin Betsy misses him.

Put the wine, sugar, vanilla, tangerine peel and spices into a large saucepan (A.L. says ‘a non-reactive saucepan’, which just means one that won’t discolour when red wine is simmered within. If discolouration doesn’t bother you, use any pan you have!) and bring to the boil, stirring. Skim off the froth that comes to the surface.

Simmer for 30 minutes to infuse the spices. Scrape off the zest from the lemon using a potato peeler, and add the zest to the syrup. Cover and set aside to cool (and ‘mature’ says A.L.).

At the same time, make a weak tea by adding 575ml of boiling water to the tea bag in a heat-proof bowl. Then stir in the 2 TBSP sugar (A.L. says you use this rehydrate the prunes and apricots and the tea needs to be very sweet to allow the natural sugar in the fruit to remain there and not leach into the soaking liquid; this would happen if you use unsweetened tea).

Add the prunes and apricots to the tea and put over a very low heat for 10 minutes. Remove from the heat and leave the fruit to plump up.

Peel the pears, scoop out the core ( I use a melon baller for this) and cut into quarters. (A.L. recommends rubbing the pears with lemon juice to prevent discolouration). Bring the red wine syrup back to the boil, turn down to a gentle simmer and add the pears. (A.L. says you need to keep the fruit beneath the surface of the liquid and the easiest way to achieve this is to use a lid from a smaller pan to hold them down. I also found that spooning the syrup over the exposed fruit helped.) Simmer for 30 minutes and remove from heat.

Drain the prunes and apricots and discard the tea, remove the lid from the syrup and add them to the pears. Replace the lid and allow to cool completely before refrigerating overnight.

The compote is now ready to serve. A.L. says he prefers to leave the spices in, with the warning ‘if you do so warn your guests that they are there for decorative effect. Not everyone likes to crunch on a peppercorn while eating pudding.’