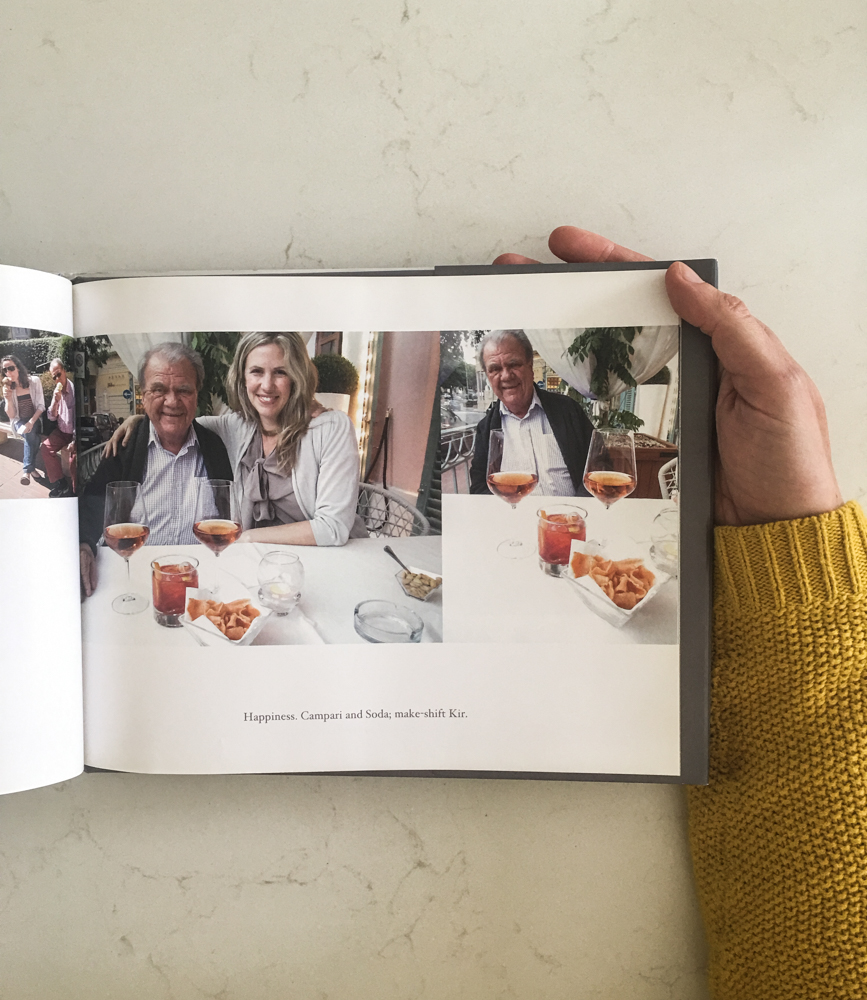 Spend time with the books.

That’s what the owner of Books for Cooks said to me when I began working at the shop. There were 10,000 titles on the shelves; it was daunting. But she’d just smile and say, spend time with them. Touch their spines and pull them out so they’re in line with each other. Make them smooth. Read the titles. Before you know it, you’ll know them; you’ll know where they are in the store. You’ll know what’s inside.

This morning I spent a few minutes with my cookbooks. The sun was streaming through my kitchen window onto the shelves, and I could see how askew they were. I pulled their spines out, lined them up, and tidied the cards that were falling out in between. These cards are favourites that I don’t want to throw away, but are otherwise homeless. Birthday cards. Anniversary cards. Notes from my kids. This way when I crack open a book looking for a recipe, every so often, a memory will fall out.

Tucked between two cookbooks is a skinny grey book my sister and I put together called Travels with George. George was my father’s cousin, but also a mentor to us, an adventurer, a lover of food and wine. The book is a photo book, not a cookbook, but I keep it there anyway. I want those memories to fall out.

In the spring of 2011 George asked us to accompany him on a road trip from his home in London to Tuscany and back. His wife Betsy wasn’t available, and time was of the essence. George had kidney issues. His knee was bad. Driving wouldn’t be an option for long. But for George, there wasn’t any other way. He loved his Michelin Guide, a book designed to steer drivers towards the best restaurants, the best tiny villages, the best vineyards. Would we like to come with him, this one last time? And, could we travel lightly? He needed space in the back for all the wine he’d be buying along the way.

I called the book Travels with George after Graham Green’s novel, Travels with my Aunt, a story about a retired bank manager who decides to travel with his elderly eccentric aunt, her way. They meander through Brighton, Paris, Istanbul and Paraguay. They meet hippies and war criminals. They smoke pot. Greene described it as “the only book I have written just for the fun of it.”

So my sister and I somehow left our little kids and husbands behind and travelled with George, just for the fun of it. We meandered in his aging ‘wagon’ from London to Reims to Beaune to Lecchi to Pistoia to Montecatini Terme to Matougues to London. In between were exceptional meals, delicious wines, gelato, stories about his courtship with Betsy, lots of Frank Sinatra, and visits with his old friends. We even spent a few extra days in Tuscany; what else is one to do when the wagon breaks down? After we were rescued from the side of the autostrata, after Frederico the tow truck operator hauled George’s car onto the flat bed, (with George still behind the wheel, my sister beside him, me in the back seat – an illegal move in North America?) George immediately pulled out his faithful Micheline Guide; we’d need to know where to eat that night, after all.

George died this past weekend. He was on dialysis at the end, his legs shot and kidneys too weak to withstand a knee operation. So here I am, spending time with this book.

Spend time with anything you’d like to get to know.

And say yes to travelling, just for the fun of it.

PS – George insisted we order Campari and Soda the first night we were ‘stranded’ in Montecatini Terme. “It’s the traditional aperetif of Northern Italy, girls.” There we are up above, Campari and soda with a twist of orange rind, George’s pressed shirt and his big, happy smile.