They paved Paradise and put up a parking lot 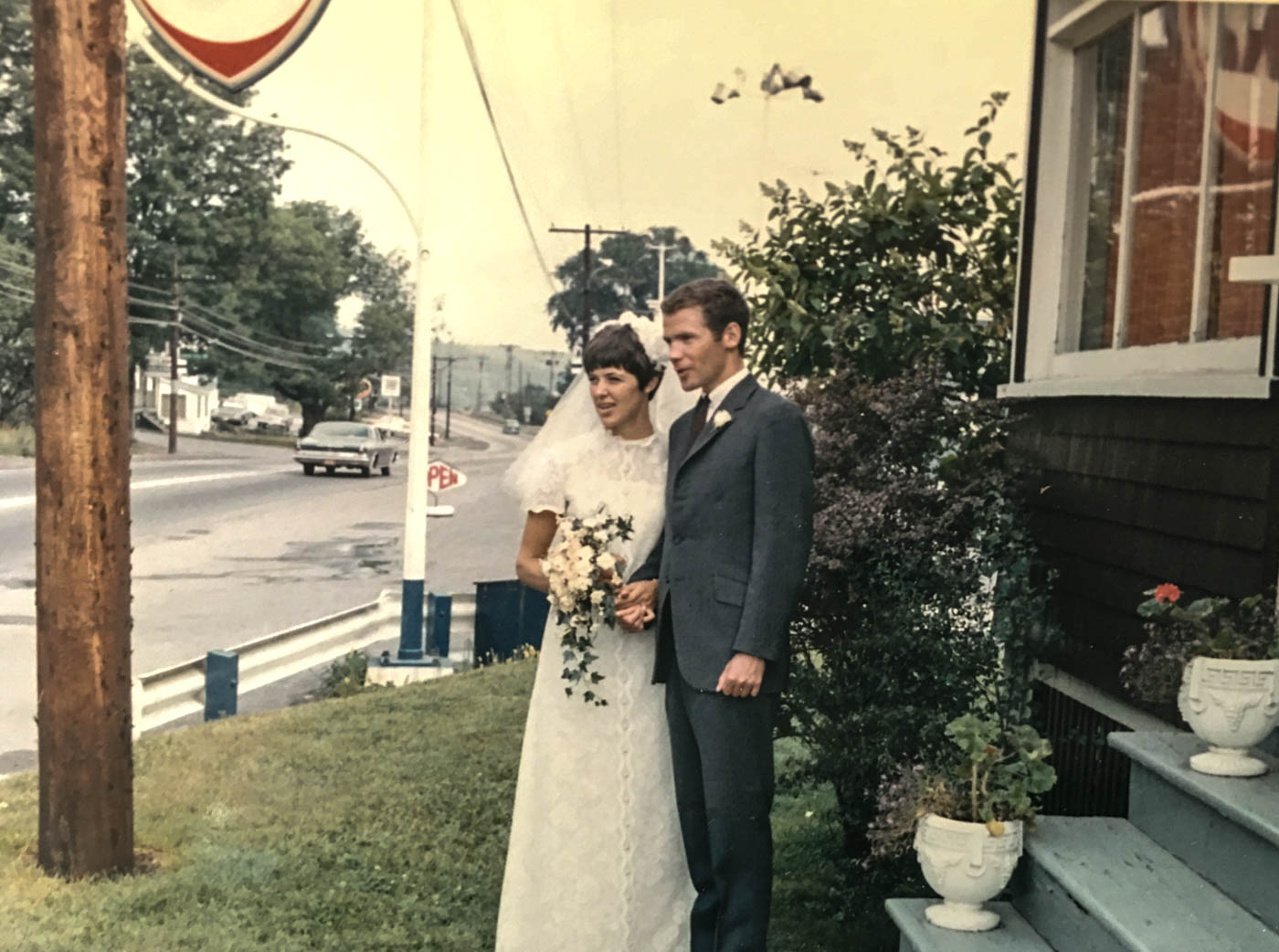 Below is the story as told to me by my mother the day after her 50th wedding anniversary party. My parents were married in the morning, so my sisters and I hosted a morning brunch for them, in the spirit of their wedding. We served ‘pigs in a blanket’, coffee cakes, fruit salads, tea biscuits and jam – all the things my aunts could remember being served at the brunch after the ceremony. The next day, while basking it the ‘it’s all over thank goodness but wasn’t it fun’ glow, my mom and I leafed through her tiny wedding album while sipping coffee and nibbling on leftover oatmeal muffins from the party. That’s when I came across the above photo: my parents, standing in front of my grandmother’s rented house, the Fina gas station in the background. It’s not a typical wedding shot; I knew there would be a story…

“We lived in a rented house owned by our neighbour the Fina station. I was in my early teens when we first moved there. The house was right on the Bedford Highway, but across the front we had three apple trees that softened everything. On the left side of the house there was a lovely lawn that flowed toward our neighbours, a B&B with a gorgeous garden full of roses and forsythia. On the other side of the house was our driveway, then a space of lawn where we played croquet, bordered by a white picket fence. The gas station was on the other side of the fence.

We had railway tracks behind the house, but they were covered by a wooded area and a lovely big cherry tree. Sandra (my mom’s little sister) and I would climb and pick the cherries while Susan (Sandra’s twin) made the pastry for cherry pie. We were a good team.

One day, in my late teens, a bigger and better Fina station took over the running of the small garage next door. They wanted more space, so the first thing they did was pave over our croquet lawn to make a bigger parking lot.

While studying nursing I lived in residence, and during that time, I met Ian. Three years later we got engaged. By that time I was rooming with two other friends in an apartment near Dalhousie University, and took the bus to visit my mom on the weekend or on days off. I remember my friend Susan and I would get off work and get on the bus and giggle the whole way home, tired from our night shift.

It was a difficult time at home because my mom and dad were separated and my father had moved to Montreal. So we planned a summer wedding after graduation. We wanted it to be traditional, and beautiful as possible under the circumstances. We got married at 8 o’clock in the morning at a small chapel in Halifax. Everyone who attended our early morning wedding was invited to come back to my mother’s house next to the Fina station for an early morning brunch.

Mom and all three of her sisters spent the week prior to the wedding working together to prepare food for the brunch. I spent the week lying around on the small patch of grass getting a sun tan.

I can’t remember much about the brunch. I remember the table was pretty, my mother was so artistic and always set a beautiful table with flowers from around the property. The wedding cake was a traditional pound cake, made by The French Pastry, a shop in Halifax. But my aunt, who owned a restaurant, frosted the cake and decorated it with rose petals.

I know oatmeal muffins were served, because I wrote it down in my recipe book.

Mom knew that after the wedding she was moving  – to a new life, and an apartment on the shore of Bedford basin, 10 miles away. We also knew that the Fina station had plans for our house. They were soon going to be tearing it down to extend the parking lot. But just before the wedding, they completely painted our house a rich dark brown. I remember my mother put wicker blinds in the window to match the brown, to make it more elegant.

Dad didn’t come to the wedding, but he sent me a ‘going away outfit’ from Montreal. It was a two piece dress, white and green. He always understood style. I wore it as we left to go camping in Cape Breton for our honeymoon.

When I look at the photos from that brunch, I think why is that Fina station in the background, and not the pretty B&B on the other side? But it does remind me of our life then, next to the garage, and how they surprised us with a gesture of kindness before the wedding, by painting the house.

A month later, after mom was settled in her new apartment, they tore the house down.” 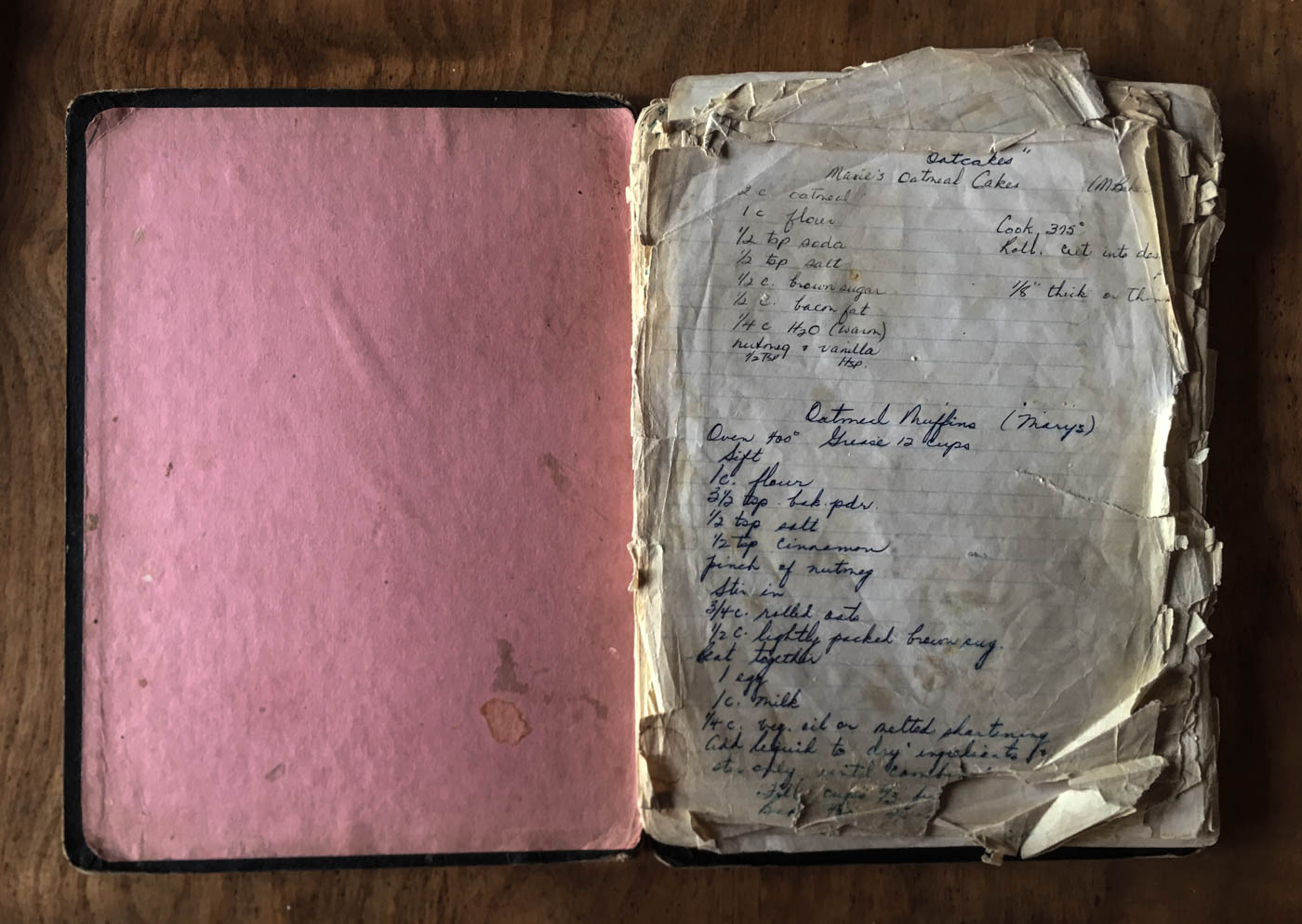 Oatmeal Muffins – part of the wedding buffet, summer, 1968
*Life was simpler then. These are delicious just as they are, but a few fresh berries studded into each muffin are a nice touch.

Add liquid to dry ingredients and stir until combined. Fill muffin cups 2/3 full with batter. Bake 18-20 minutes, or until just cooked through and tops are golden.