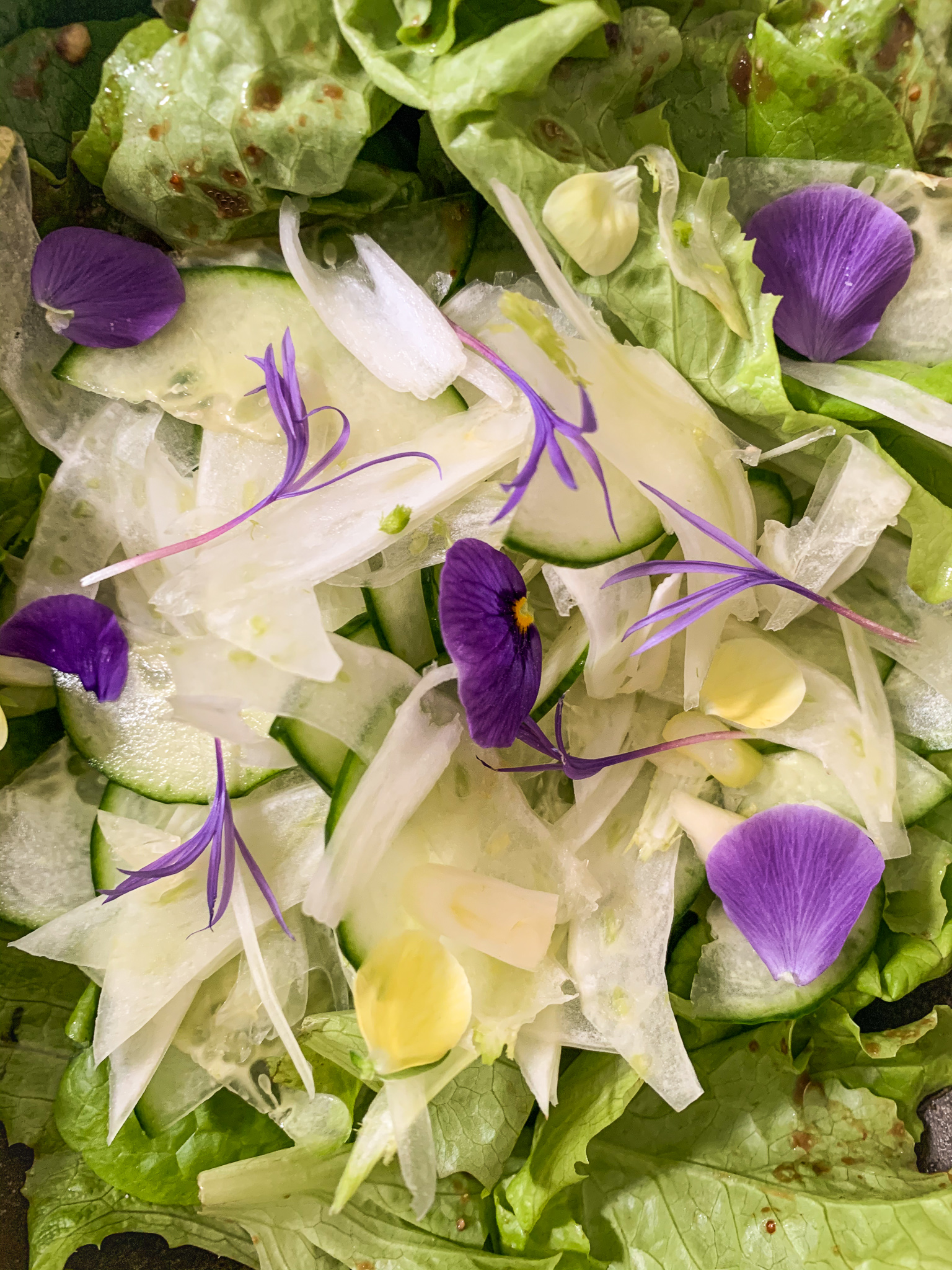 There is a red door at the back of our house, facing south, that leads to the basement. The door sits at 12 o’clock, an old rhododendron at six, a weeping mulberry at three and a small birch at nine. The centre of the clock is a patch of grass, just large enough, my dancer niece says, to twirl in a circle.

When we first moved in, the periphery of the clock was a tall tangle of green – spirea specifically, that had once dotted the clock but had stretched, with wild abandon, to cover everything in behind. One spring day, early on, my gardening whisperer friend Piia and I hacked away at the spirea until we discovered trees and shrubs underneath the spindly boughs. We didn’t get to the red door, where a thicket of daylilies exploded on one side and a nasty patch of goat weed encroached on the other.

I was born in mid October. In zodiac parlance, I am a Libra, latin for scales. The world of astrology isn’t something I’ve paid much attention to, but I like symmetry in my life. I crave balance. Coincidence? I don’t know, but I do know that when I’d look at that red door, flanked by daylilies and weeds, I’d get itchy. The scene was more than a door; it was a manifestation of domestic life, tipping me slowly into further chaos. I had to set it right.

I started with two climbing yellow roses. Piia helped me dig the holes on either side. I stood back and watched and she carefully massaged fresh soil and bone meal into the holes, as if softening kale for a salad. Russian sage plants came next, to add a burst of purple and a waft of sage when walking by. A few years later I added two small geraniums, along with purple clematis to climb up each rose bush. The roses are my height now, the Russian sage by mid summer will be twice my width. It’s a wild balance of purple, green and yellow, holding court on both sides of 12 o’clock.

Inside I am whisking oil, vinegar and mustard in a bowl. Next I’ll add soft greens, fennel and cucumber – thinly sliced on the mandolin to match the softness of the lettuce – and I’ll finish it with yellows and purples. I picked the flowers on a neighbourhood walk – pansies from my friend’s garden, and bachelor buttons from an abandoned patch of grass. Some say bachelor buttons are a weed, I’d say they’re a little gift filled with spears of beauty. Yesterday I scattered them over a cake. But today, it’s salad. I needed the balance.

The red door will be replaced soon. It swings inward, asking someone to step inside and fall down the basement stairs. New building codes, learned during the long process of renovating the basement, do not support potential danger. So we are getting a new door.

The basement at the bottom of the stairs has a new concrete subfloor. For a brief time, after the demolition but before the concrete, I would search through the dirt and rubble for bits of treasure hidden under our 160 year old home – bits of thick glass bottles, long nails with squared off heads and many pieces of white ceramic covered in a delicate red leaf pattern. I piled the fragments in the garden shed, hoping to find enough to create the semblance of a shape. But then the floor was poured, locking the rest of the clues beneath the concrete. I have to guess at what I have – the bottom of a bowl, or maybe a chamber pot? It’s ok. Unsolved mysteries aren’t a threat to the balance, they are a step towards a question, a story.

I eat my salad from a ceramic bowl made by my friend Heather across the bridge. Who knows what stories will be left when I’m gone. I hope the clues will lead to a life of salad and cake, friends and flowers, weeds and shrubs, and a door that swings safely towards six o’clock. 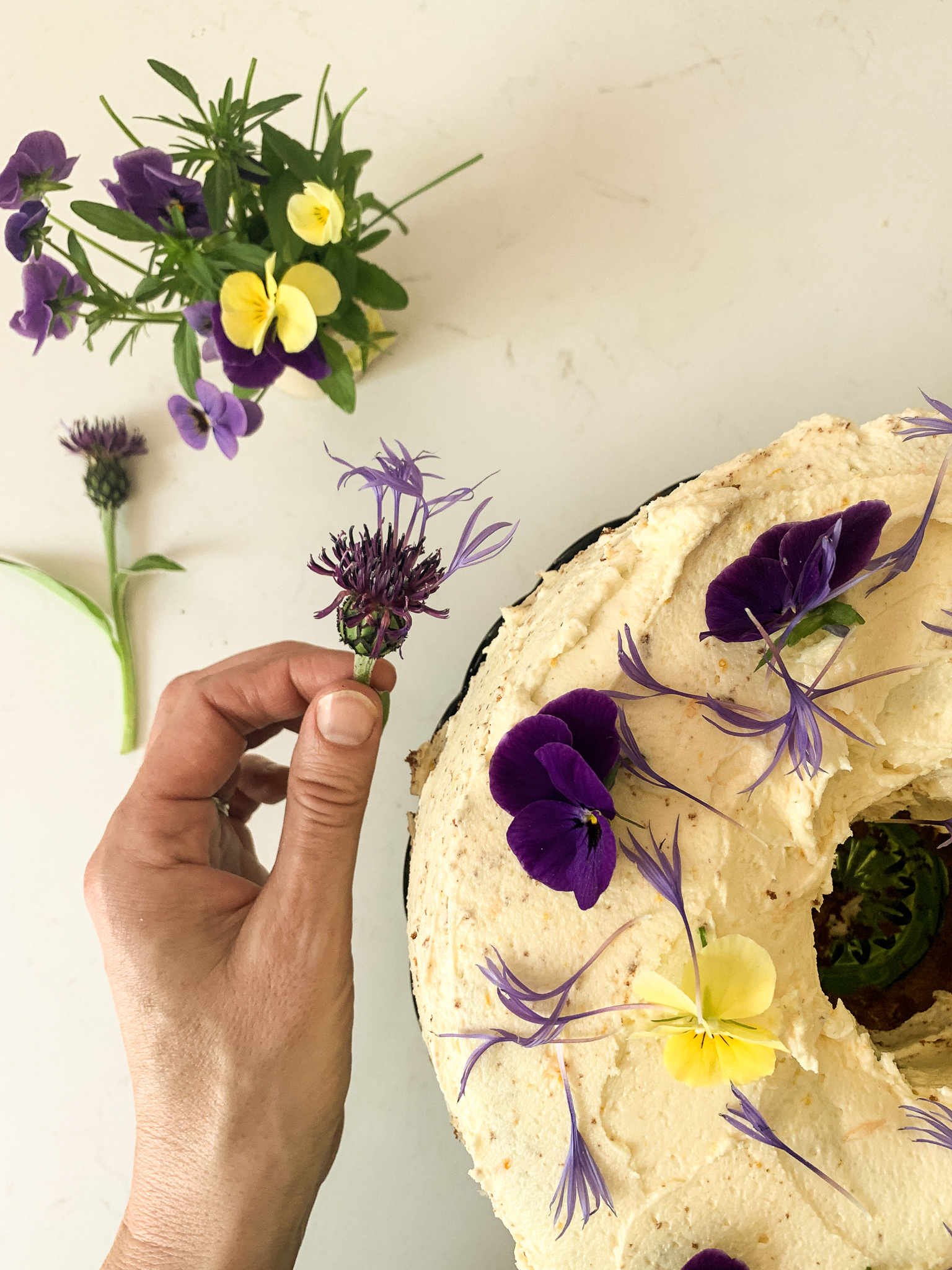 Mila’s Orange Chiffon Cake
-as copied from my sister’s mother-in-law’s recipe card – the family’s favourite birthday cake. Last week I baked the cake in three cake pans and layered them with Swiss Meringue Buttercream. Below is the traditional way, baked in a bundt pan, with orange frosting. Arguably better!

Grease a bundt pan with butter. Sift together:

Make a well in centre of dry ingredients; add:

Beat with a wooden spoon until smooth.

Sprinkle in ½ teaspoon cream of tartar.

Invert cake pan immediately and leave suspended on a rack until cool, then carefully shake after loosening with a knife. (I had to run a knife around the centre and edge of the pan several times. Perhaps I didn’t grease it enough. Eventually, the cake came loose, intact).

Cream butter with a pinch of salt. Add icing sugar, alternately with the orange juice, and beat until light and fluffy. Beat in orange zest. Spread over the cooled cake and serve.