By Lindsay Cameron WilsonJune 8, 2021No Comments 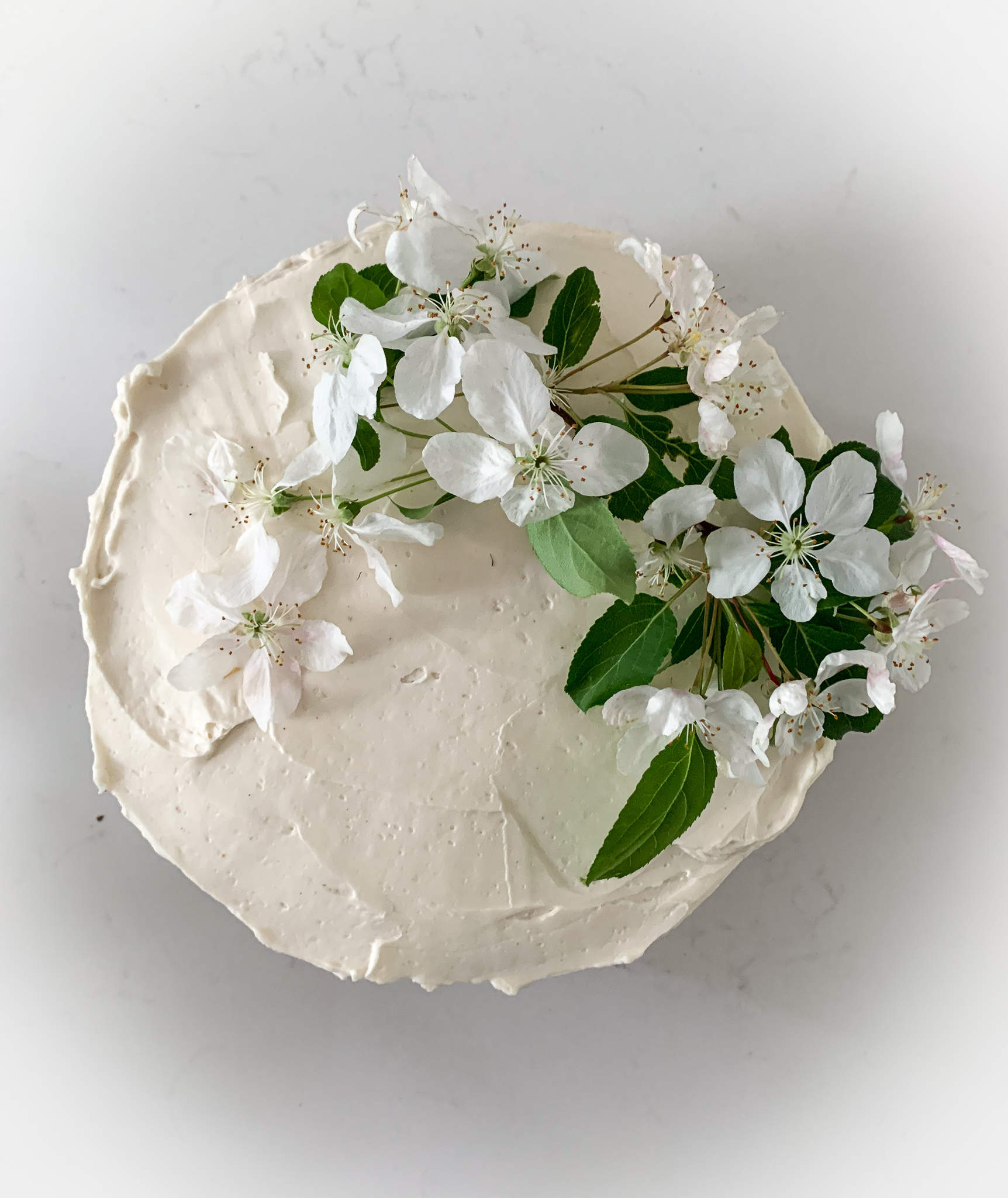 To make Swiss meringue buttercream, you begin by suspending a sparkling clean bowl (ideally from a stand mixer) over a pot of barely simmering water. To this bowl add six egg whites (230g) and two cups (400g) of sugar. Whisk the whites and sugar together until the granules of sugar melt and the mixture is smooth. Test this by rubbing a dab of the mixture between finger and thumb. If you feel the granules of sugar, it isn’t ready. Keep whisking. When the mixture feels smooth, transfer to a stand mixer. It is now time to whip the sugary egg whites until stiff peaks appear. Then we’ll add unsalted butter – tablespoon by tablespoon, salt and vanilla. Why all the fuss? Because Swiss meringue buttercream (SMBC as the pros call it) is easier to spread, holds its shape, and isn’t too sweet.

I sound like I know what I’m doing. I don’t.

My cake-making memories at cooking school are sketchy. I remember a black forest gateaux, a cake with so many components that several lessons are covered in one – a chocolate sponge, syrup, fruit filling and whipped cream. I remember massive spatulas, long palette knives, whisks the size of my head and post-war hobart mixers. I remember a guy named Kevin catching his sugar syrup on fire, then Kevin in the dish pit, swearing as he scraped hard syrup off his copper pot. I remember our German chef, his voice booming, but the rest, it’s a blur. Since then I’ve stuck to a few tried and true cakes, gleaned from cookbooks, friends and family that require marginal effort and minimal gear.

Until isolation hit. Making a cake, putting it in an actual cake box and delivering it to the doorstep of a friend on their birthday became a guaranteed highlight on a typically dreary day.

My dad would call these highlights ‘pulsed joys’ – small events throughout the day that create a spark to pull you along.

“You know, I do it for the pulsed joy,” he told me over coffee, early on in lockdown. He was referring to his morning routine, something he’s been perfecting since retirement. I was complaining about the void that comes with isolation, that loss of the feeling of anticipation that comes with planning a trip, or inviting friends for dinner. Anticipation brightens the ordinary. When these things are removed, we’re left to figure out how to brighten the ordinary, all on our own.

I should have known a retiree would know how to brighten the ordinary, all on his own.

“My day starts at 4am,” he continued. “I can’t sleep, and my bed is comfortable, but I get up anyway. Transitioning hasn’t always been easy for me, but lingering under the covers is futile. So I get up and splash cold water on my face, and I blink, and my face wakes up. It’s my first pulsed joy of the day.”

His next pulsed joy comes when he takes his morning pills with a cold glass of water. This makes him feel good, because he’s done it for the day, then he moves on to his workout routine, which takes place, right there, in the bathroom. The routine is predicated on the challenges he might face in life, like putting luggage in the overhead bin on an airplane. So he begins by lifting weights above his head. Sometimes he can see his deltoids and his latissimus dorsi in the bathroom mirror. This, he says, is also a moment of pulsed joy.

“If I’m feeling particularly depleted, there is a little green bottle up on the window sill that I reach for.” I know the one – he bought it on a trip to Paris a few years ago. My mother planned on meandering on their first day, but my dad had other plans. He had just read Chandler Burr’s story in the New Yorker about a perfume called Un Jardin Sur Le Nil, made by Hermès. The distillation process, the flavour notes, and the mythical garden on the banks of the Nile captivated him. He had to have a bottle.

“I take the bottle down, put a little on my hand and inhale the citrusy, woodsy notes. It floods me with joy.”

I think about genetics as I strain softened rhubarb and watch with wonder as the sweet, ruby liquid drips into a bowl below. I’m making another birthday cake for a friend, one that represents the layers of life right now – rhubarb from my garden, foraged apple blossoms from my sister’s tree and her mother-in-law’s orange chiffon cake recipe, the one she brings out for every birthday.

The pulsed joys really begin as I imagine what it might look like – something tall and cream coloured, three layers perhaps, filled with thick icing and layers of tart, jammy rhubarb. I imagine a frosting that spreads smoothly (despite the fact that I lost that large palette knife many years ago) and maybe I’ll flavour it with rhubarb syrup. I don’t have a cake stand that spins, the kind that makes frosting a cake look smooth and professional. I’ve never made SMBC before, but Sally from Sally’s Baking Addiction, with her perfect nails and clear voice, says I can do it. She reminds me of my junior high Home Economics teacher; I trust her. And I trust myself to wing it if necessary. This is what years of forgetting what I learned in culinary school has taught me to do.

I cut the butter for the SMBC into tablespoon-sized squares. The butter is not too cold, not too warm, but just right. I drop squares into the stiff egg whites as the whisk spins. One at a time. This process takes a while so I do some leg lifts. Another pulsed joy. Towards the end I remember the rhubarb syrup and pour it into pillows of white. But soon the pillows turn wet, then the whole thing curdles. Winging it doesn’t always work. But the voices on the internet tell me to continue whisking, it will come together. But it doesn’t. I wonder if I have enough butter to start again.

There are two reasons SMBC curdles – either the mixture is too warm or too cold. I assume the latter; it’s a temperate 18C outside and the kitchen window is open for Pearl the cat to jump through. I place the mixing bowl back over simmering water until the sides of the buttercream have melted, just a little, then whisk it again. The internet is right, it works, and a sweaty sense of joy pulses through the kitchen.

Pearl jumps through the window just as I am layering the tiers of chiffon with rhubarb and SMBC. There’s no food in her bowl; isolation has weakened many aspects of domesticity and clearly strengthened others. I top the cake with a mound of more buttercream, smoothing it until it creates a snowy crevice along the edge. The flat side of a serrated bread knife is the perfect tool to smooth the crevices right down the sides of the cake. Who needs a palette knife anyway?

It’s raining now. I walk over to my sister’s house, just around the corner, and sneak through the gates. I smell lilacs, lily of the valley and wet grass. The apple tree is covered in white blossoms, sagging under the weight of the rain. I snip a few blooms, give them a shake, and head back home. 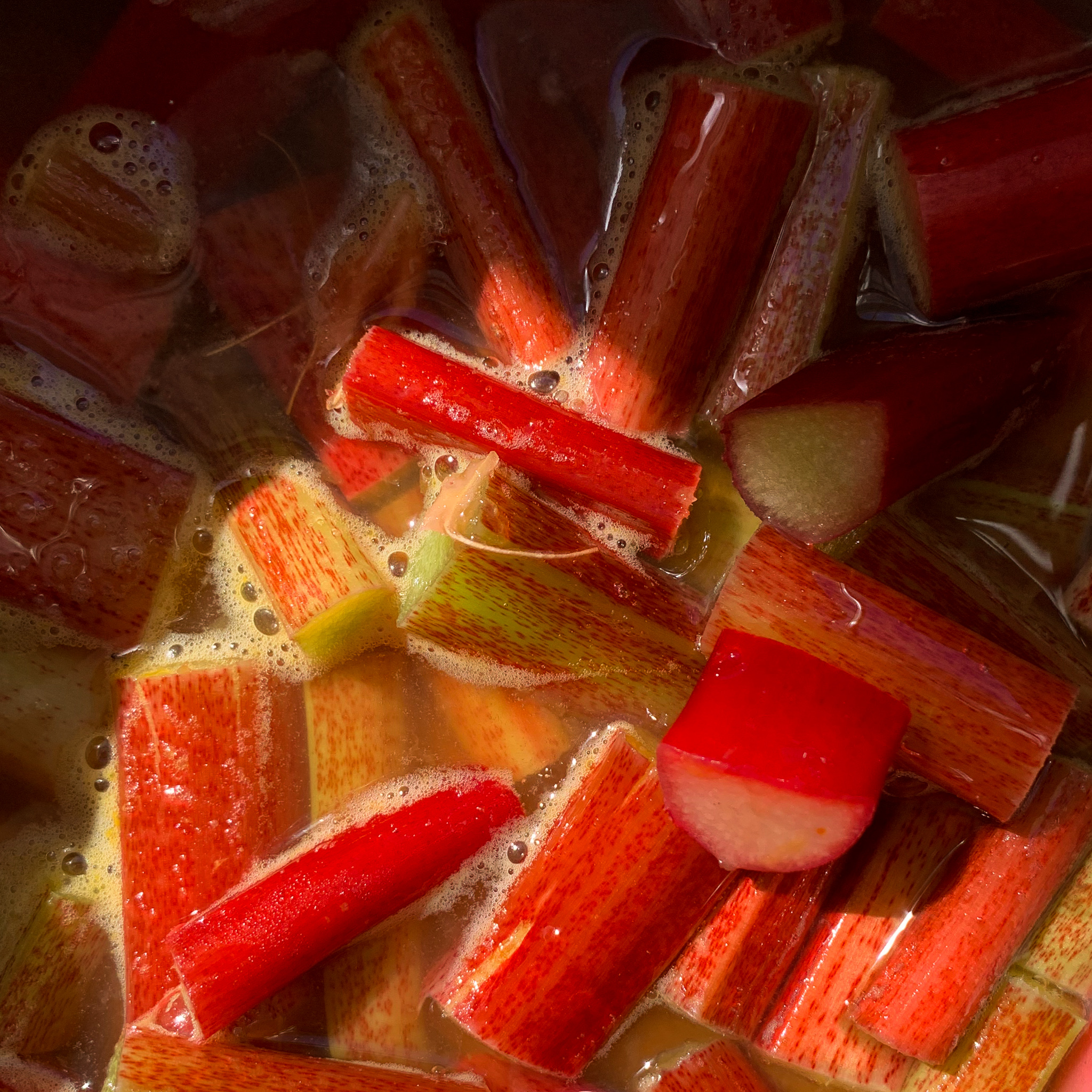 Place 2 cups (about 230g) of chopped rhubarb in a saucepan. Cover with ¼ cup sugar, ¼ cup (125ml) water and the zest of a lemon. (Feel free to get creative here – you could add a good pinch of cinnamon, a vanilla pod, split, or a few pieces of chopped preserved stem ginger and a tablespoon or two, instead of sugar, of the syrup from the jar – all good choices). Simmer mixture over low heat, stirring occasionally, until rhubarb collapses. Taste – add a squeeze of lemon juice if too sweet, or another spoonful of sugar if too tart. It will depend on your tastes and the tartness of the rhubarb. Leave to cool.

Stewed rhubarb, at this stage, is ready to be spooned over ice cream or yogurt, granola… whatever you’d like. For the cake, strain the mixture through a sieve and save the sweet liquid. I spread the thick jam onto the layers of cake, and poured a few tablespoons of the liquid into the SMBC. It was a subtle addition, I was winging it, but in the end, it worked.