By Lindsay Cameron WilsonApril 2, 2021No Comments 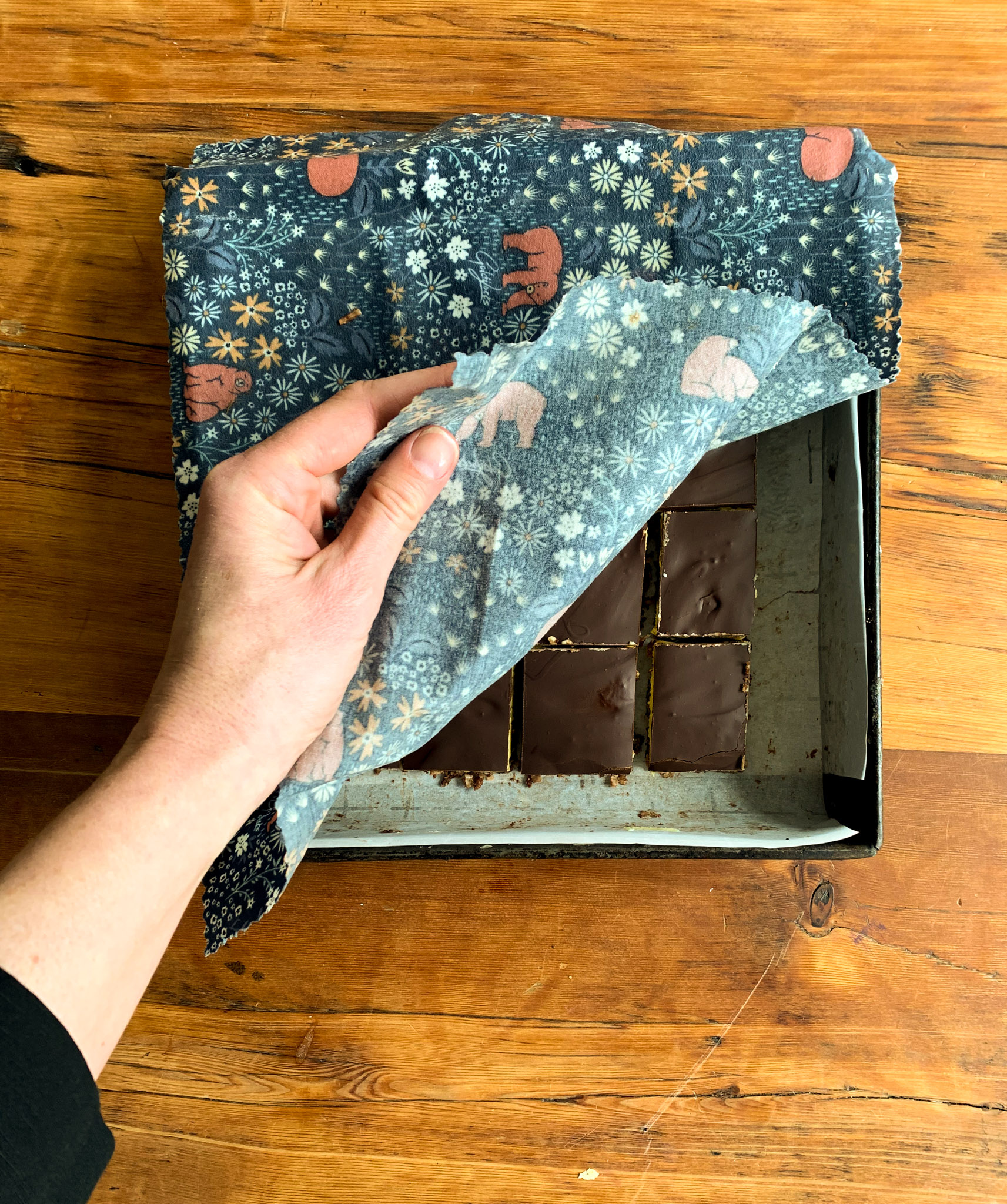 They seemed fussy. I was raised on simple cakes, pies without lattice, brownies and chocolate chip cookies – nothing that required a warm knife to cleanly slice through layers. The bottom layer of coconut and nuts were not kid friendly. The yellow creamy middle was too sweet. The top slick of chocolate was the best part, but impossible to lick off.

A few years ago Canada Post issued a series of stamps to celebrate desserts of Canada – blueberry grunt, Saskatoon berry pie, butter tarts, tarte au sucre, and Nanaimo bars. That year I sent as many letters as possible stamped with blueberry grunt, a Maritime favourite. The stamp isn’t accurate; it depicts blueberries in a cast iron frying pan topped with dumplings. But we Maritimers know that dumplings require a lid to steam. It’s possible, but unlikely, that anyone would choose to steam dumplings in a frying pan. But I didn’t tweet about it, no one did.

Meanwhile, the west coast went wild over the depiction of the Nanaimo bar. Residents of Nanaimo, British Columbia, home of the bar, said the base was too thin, the middle too thick. The Vancouver Sun shared tweets complaining that the centre looked like peanut butter. Another suggested the stamp looked like a piece of cheesecake. “Clearly the artist had never eaten one.”

Last week, the NY Times posted a picture of Nanaimo bars along with a recipe. Again, twitter went wild. The custard base ratio was off in the other direction, so off, one tweeter called the result “haunting.”

Canadians are clearly proud and protective of this sweet, triple-layered bar made almost entirely of boxed ingredients. But together, layered carefully, they form more than the sum of their parts. And if you like sweet treats with a thick but not too thick custard middle, this could be for you. And apparently for me too. I just made a batch, and as it turns out, they’re quite delicious.

*pictured here covered with the prettiest reusable beeswax food wrap. And thanks to Lindsay Jones for prompting me on this one 😉 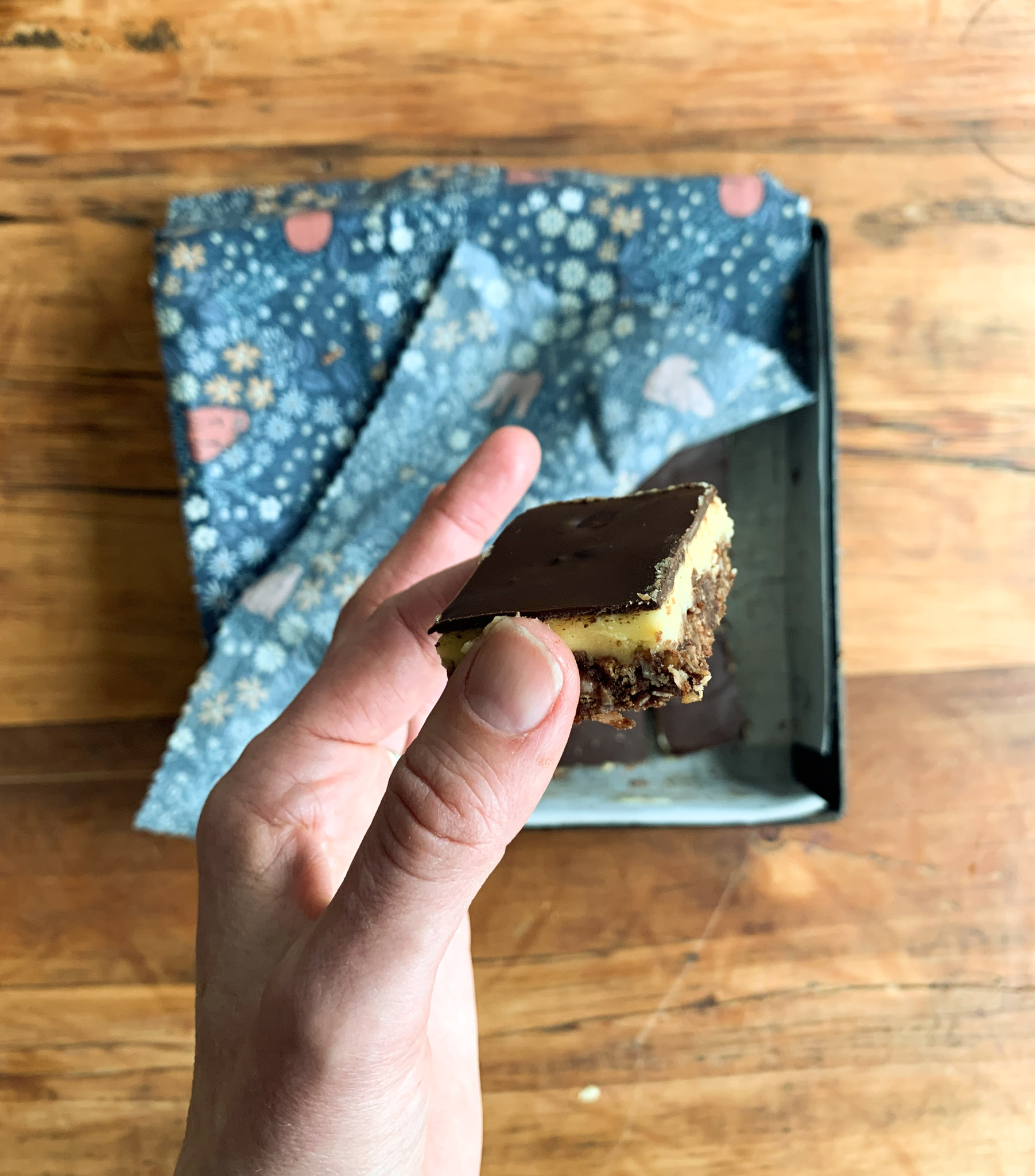 This recipe is adapted from this version featured on the City of Nanaimo’s website. You can get more authentic than that.

In a double boiler over gently simmering water, melt butter with sugar and cocoa. Stir until smooth. Add whisked egg and stir well until smooth. Remove from heat and add graham cracker crumbs, coconut and nuts. (*Graham crackers are a 19th century American cookie / biscuit invented by Sylvester Graham, a Presbyterian Minister who hoped this simple biscuit sweetened with honey and cinnamon would encourage others to join him in a vegetarian diet, which, according to questionable internet sources, would discourage excessive pleasures of the flesh. Who knows if he was successful, but these biscuits have lived on as the perfect base, when blended, for cheesecakes, bars, and when left whole, the key ingredient in s’mores. In any case, I made cracker crumbs by blending the graham crackers in my food processor, and used the same unwashed processor to pulse the walnuts). Stir well. Pat mixture into pan and place in the refrigerator.

Meanwhile, beat butter with custard powder (and notice how the white powder turns the mixture into a vibrant egg-yolk yellow. Bird’s Eye custard powder was invented by Alfred Bird in 1837 for his wife who was allergic to eggs, the essential thickening ingredient in traditional custard. He must have also slipped a magically transformative colouring agent into the recipe.) Slowly add cream and icing sugar, beating well until everything is smooth and fluffy. Spoon ‘custard’ onto the chilled base, smooth the top, and return to the refrigerator.

Meanwhile, melt chocolate and butter in a small saucepan over low heat (or in the microwave), stirring well until smooth. Drizzle over custard layer and smooth with a knife. Return to the refrigerator to set. For perfect squares, slice with a warm, clean knife and serve, not letting the ratio of base to custard get in the way of your enjoyment.