By Lindsay Cameron WilsonMarch 26, 2021No Comments 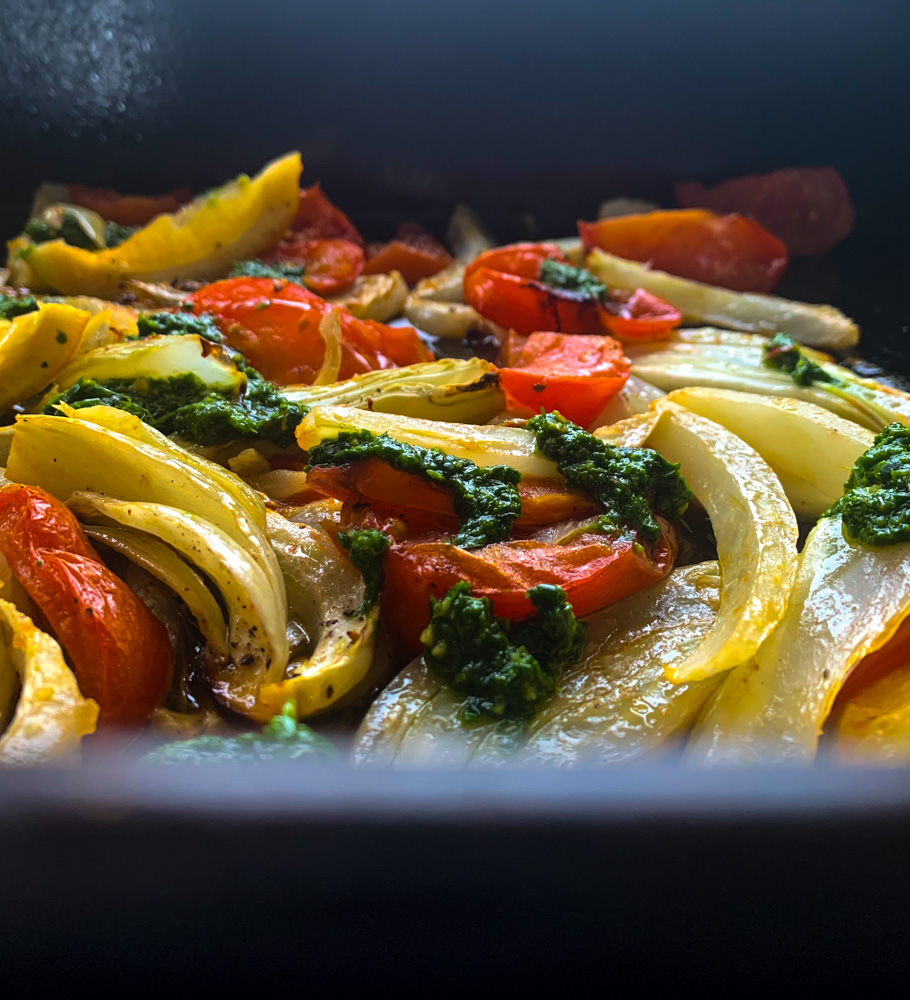 I’m in the kitchen staring at a fennel bulb and a pile of tomatoes, trying to remember how to make that roasted salad I love so much. I’m thinking about soft, sticky wedges of fennel, rich roasted tomatoes and a touch of heat, salt and lemon. But that’s all I can remember. I’ll have to go by memory.

Jenn Grant’s cover of Leonard Cohen’s “Bird on the Wire” is playing in the kitchen. I haven’t heard this song for years. Jenn’s version is soft and velvety. Fresh but old. I chop the fronds from the fennel bulb, slice it into pieces, and sing along.

I cut the tomatoes into wedges, smash a few cloves of garlic and toss it all together in a roasting pan with a glug of olive oil, salt, pepper, and a pinch of sugar to sweeten those wintery tomatoes.

I have tried
In my way to be free
I remember it all.

When I was little, when we had nothing else to do, my older sister Sally and I would catch the 1 Spring Garden bus and head downtown. Sally was in charge of the money – a dollar between the two of us, both ways. We’d usually head to the library and cruise around and sometimes borrow a book. Or we’d sit on the wall outside the library, beside the chip truck, and people-watch while we waited for the bus. It was a free and easy adventure, where the bus ride was the main event.

Except that one time when we rode the bus all the way to a record store to buy a present for our dad’s birthday. He’s always been a music lover. He reads album liner notes, he listens to songs on repeat, he learns the back stories. So we paid attention when he started mentioning Jennifer Warnes’s new album Famous Blue Raincoat. We had no clue who Jennifer Warnes was, but we’d been listening to Katrina and the Waves, on repeat, for a year. We needed fresh tunes in our lives.

“Jenny singing Lenny!” said the woman at the record store as she led us through the CDs. “Jenny was Leonard Cohen’s backup singer for years,” she gushed as we stood in our pastel sweatsuits and ski jackets, blinking. “Her covers of his songs are so rich and lush. You’ll love it.”

She was right. For months, perhaps years after that Saturday in early December, we spent car trips listening to Jennifer Warnes singing “Ain’t No Cure For Love,” “First We Take Manhattan” and my favourite, “Bird on the Wire.”

I make a pesto with the fronds from the fennel, a few basil leaves from a plant on the counter, spinach leaves and a red chilli. I drizzle it over the roasted vegetables until everything is colourful, lacquered and glistening. It’s not quite the original recipe, but I look at me trying, in my way, to be free.

PS: Birds on a wire have been a theme lately. The snow buntings are still here, by the way, swirling like snowflakes in the wind.

This a versatile “salad” of sorts that is the base for so many good things. Spoon it over meat or fish or toss with cooked beans or chickpeas, salad leaves or pasta. You could also add sliced feta to the pan before roasting to capture the essence of this viral recipe. Be free!

Spinach, arugula or kale
Fronds from the fennel bulb
1 red chilli, chopped and deseeded (or any chili, red pepper flakes, squirt of sriracha –  something to add heat)
basil leaves
Handful of toasted nuts (pinenuts, walnuts, cashews, whatever you have)
Olive oil
Salt and cracked pepper

Place tomato wedges in a roasting pan. Remove any rough or brown spots from the fennel with a vegetable peeler then slice bulb in half. Remove core and slice fennel into strips, about the width of a finger (this way they’ll roast faster and become lovely and soft, not chewy) then add slices to the pan along with wedges of lemon. Smash garlic with the side of a knife and the weight of your hand to remove the papery skins and add to the pan. Top with sugar (to add a little sweet sunshine to those wintery tomatoes) pepper and salt. Swirl with olive oil and toss together with your hands until everything is glossy. Roast for 15 minutes or so, stirring every so often until vegetables are soft and beginning to brown.

While vegetables are roasting, make the pesto. This is my rough version:

Fill a 2 cup (500ml) measuring cup with sturdy greens (spinach, arugula, kale), fennel fronds, chopped chilli and a few basil leaves (from the plant on the counter). Tip into a small food processor with the nuts and pulse a few times to combine. While the machine is running, add olive oil until mixture comes together into a nice, wet paste. Add salt and pepper to taste.

I served the roasted vegetables with penne and spoonfuls of pesto. Go in whatever direction you’d like.