By Lindsay Cameron WilsonMay 14, 2021No Comments 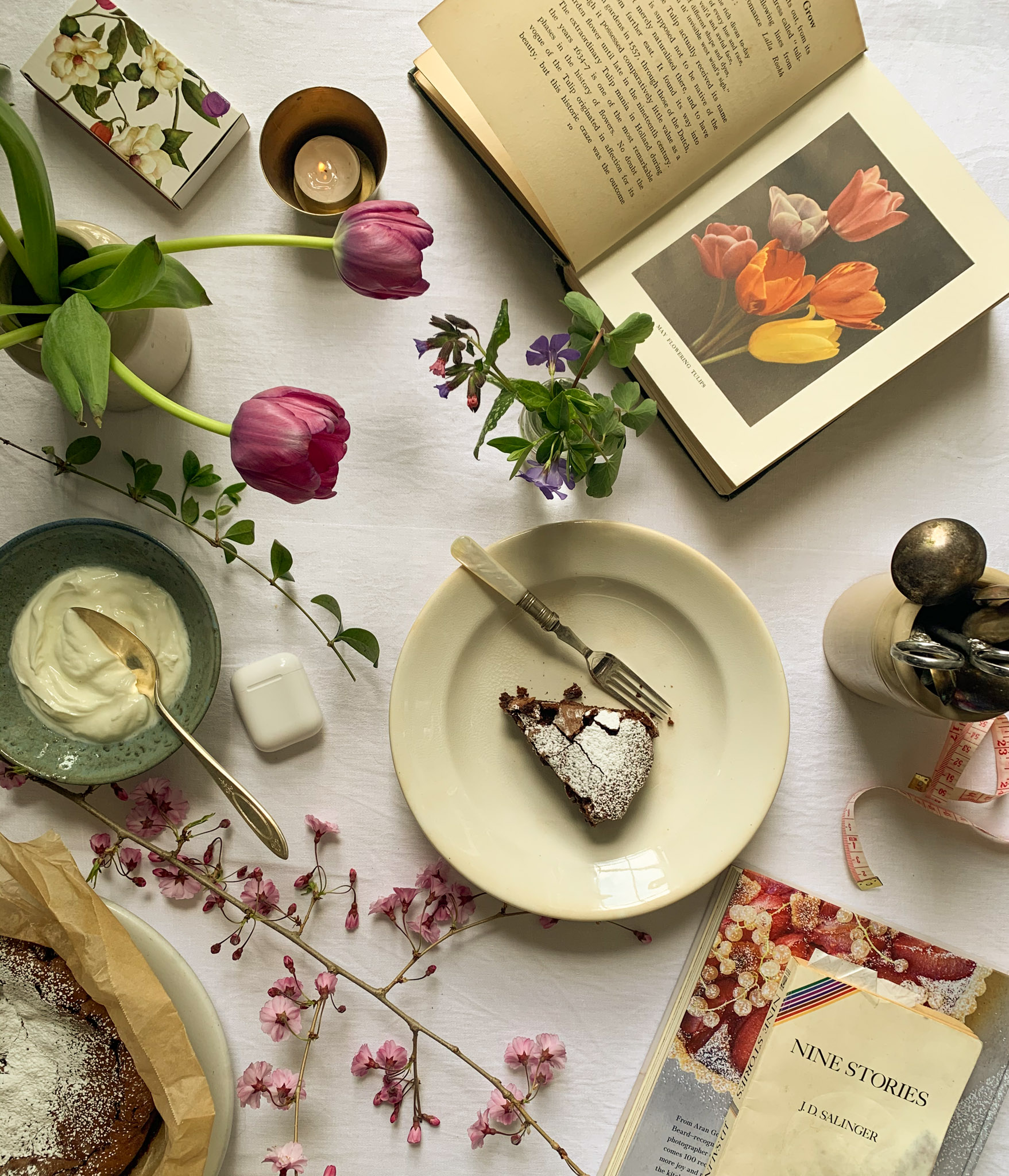 It’s lockdown again and I’m back to exercising in the dining room. It’s a rich blue room, Hague Blue, with sage green around the windows and doors. In the corner is a china cupboard passed along from Aunty Amy. On the walls are more gifts from Amy – a painting of a woman wearing a pastel scarf tied at the neck, and a small cupboard that rattles whenever it’s time for cardio. This is the way it will be until our basement renovation is complete – a dining room table in the living room, a gym in the dining room, and me, trying to jump softly like a ballerina so I don’t break the wedding china.

My favourite painting is above the small cupboard, behind the bench press. I bought it online through a local auction last summer – I could barely tell what it looked like through the thumbnail computer image, but it was a steal, and as the only bidder, I won the painting. Once hanging on the wall I could properly see its beauty: a still life breakfast scene – a table, perhaps mahogany, set for two with green plates on white placemats and two chairs with woven cane seats. There are red tulips on the table, a bowl of plums, a plate with a few slices of toast and a small box of hot chocolate mix. The details are rough, the brush strokes are thick, and the only indication of the artist are the block initials TAP in the right hand corner. But I’ve decided the box is hot chocolate, Dutch hot chocolate specifically. Yes the table is a house in Amsterdam, where they start their day with something sweet. On the window sill, behind the table, is a black cat sitting amongst lush plants, soaking up the sun. This morning, while doing arm raises, I travelled to this table, I smelled the hot chocolate and ate a piece of toast with my face in the sun. This is what still lifes can do, especially in a pandemic – they can take you on a voyeuristic journey through time, across cultures and borders.

The Canadian artist Mary Pratt painted still lifes from photographs. She graduated from university in 1961 and had four children by 1964. Her life was a domestic one; time in the studio was limited. So she took pictures of images that gave her an ‘erotic charge’ , sent the film to Toronto to be developed, and three months later, when the film came back to her home in Newfoundland as slides, she viewed the images through a light box in the hopes that she would remember that initial jab of enthusiasm that compelled her to take the image in the first place. And when this happened, after the children were asleep, she painted.

I know this feeling. Warm light in the kitchen. Flopping tulips on the mantle. A chocolate cake, dusted with icing sugar. Bicycles in the front hall because there is nowhere else to put them, but the light is welcoming and tires are pumped. At times like this I take a picture. I am not a painter, I’m working digitally. But these moments are also fleeting, so I pull the disparate bits of joy together, and create a scene.

Pratt liked to leave touches of reality in her paintings as a counterpoint. I leave a measuring tape on the table. It’s there because I bought a hat online earlier in the day, something to protect my head this summer. I needed to confirm that yes, in fact, my head is a size large. The tape also reminds me of covid weight, something that lingers with me, literally. An AirPod case is nestled in there too. We’ve spent lockdown plugged in to our own private worlds, tapping our ears to press pause when spoken to. They’re a gift and a curse, a pandemic reality. J.D. Salinger’s Nine Stories is stacked on top of a cookbook. My brother in law lent it to me so I could read his favourite short story, A Perfect Day for Bananafish. I read it and can’t get it out of my head. There are tulips, a gift from a friend, a branch from our weeping cherry, an old flower book found at the school sale, and Aran Goyoaga’s Chocolate, Olive Oil and Citrus Cake from her cookbook, Cannelle et Vanille. My friend made the cake over the weekend, then another made it as well, so I did too. It has all the sensory components I love – zesting citrus, marbling stiff egg whites with melted chocolate, tapping icing sugar until it falls like snow onto the cake below, and a warm, soft piece of cake with a crispy crust on top.

Just ordinary things that punched me in the gut. And who knows, perhaps this image will take someone on a small adventure when they glance at this, while doing arm raises, in their dining room.