By Lindsay Cameron WilsonMay 7, 2021No Comments 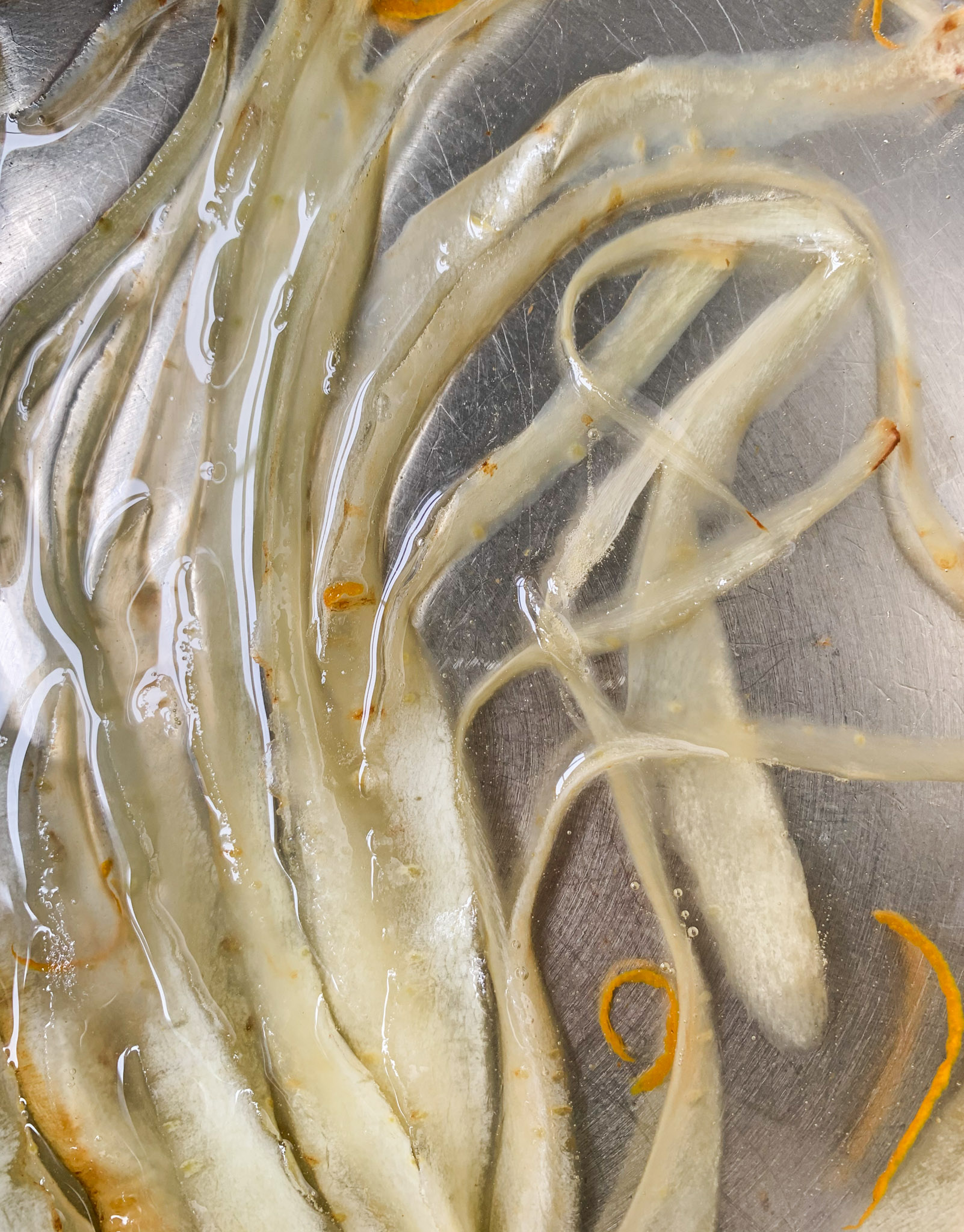 The spines of my cookbooks are fading. They sit on a shelf at the back of the kitchen, facing south east. The crabapple and elm trees outside the window are bare through the winter; for five winters light has shone straight through their branches and into the books, draining them of colour.

Wait a second. This is too somber.

Every other Monday evening my friend Stephanie drops off four dozen eggs at our door. Stephanie is a farmer and an old friend. She taught me how to sew up in her attic when we were in elementary school. I loved that attic. The attic at my house was a storage space, accessible only by moving my little sister Jessie’s bed which blocked the door. Jessie drew a Smurf village on the wall leading up to the attic, knowing it was unlikely anyone would ever see her secret artwork. Sometimes we went up there, to get a suitcase or play in a moving box. But Stephanie’s, it was a Jo March attic – soft light, a well worn squishy sofa, costumes piled in the corner and a table for creation topped with scraps of fabric and a sewing machine. It was a place of possibility.

“Are you ok?” She asked when dropping off the eggs last Monday night. “Your newsletters have been somber lately. What’s up?”

We stood at the door, six feet apart, two women the same age, as her four-way flashers blinked from her car. We talked about not getting a good night’s sleep. We talked about alcohol, and how it makes sleeping worse. We talked about magnesium, vitamin D, maca and other things that help at this stage of life. I wanted to jump into her car and keep her company on the rest of her egg run. But it’s a pandemic and we’re in lockdown again, so eventually, we said goodbye.

The next day I peeled parsnips. Peeling parsnips might sound somber, like a shelf filled with faded cookbooks. But I wanted to see if I could candy them, like Zoe Bakes did with carrot peels. She used those candied carrot peels to decorate a carrot cake, but I imagined a parsnip version, frosted with cream cheese icing and lined with candied parsnip peels. It would be an ‘edible Sauron’s crown’. Green-bin glam. A humble root vegetable, filled with possibility.

I plunged the peels into a sugar syrup flavoured with a touch of orange rind. Slowly the white peels softened and swayed like sea vegetables moving with the tide. I laid the slick peels carefully on silpat-lined cookie sheets and left them in the oven to dry until they became translucent, candied spears.

Meanwhile, I opened my fading books. Hetty McKinnon’s cookbook, Family, reminded me to roast the tomatoes languishing on the counter and blend them with parmesan, walnuts, garlic and greens to make a pesto to toss through pasta. David Lebovitz’s, My Paris Kitchen, suggested I steam the leeks I had forgotten about in the fridge, and serve them with chopped egg and a mustard vinaigrette. I played Joel Plasket. I put on mascara. 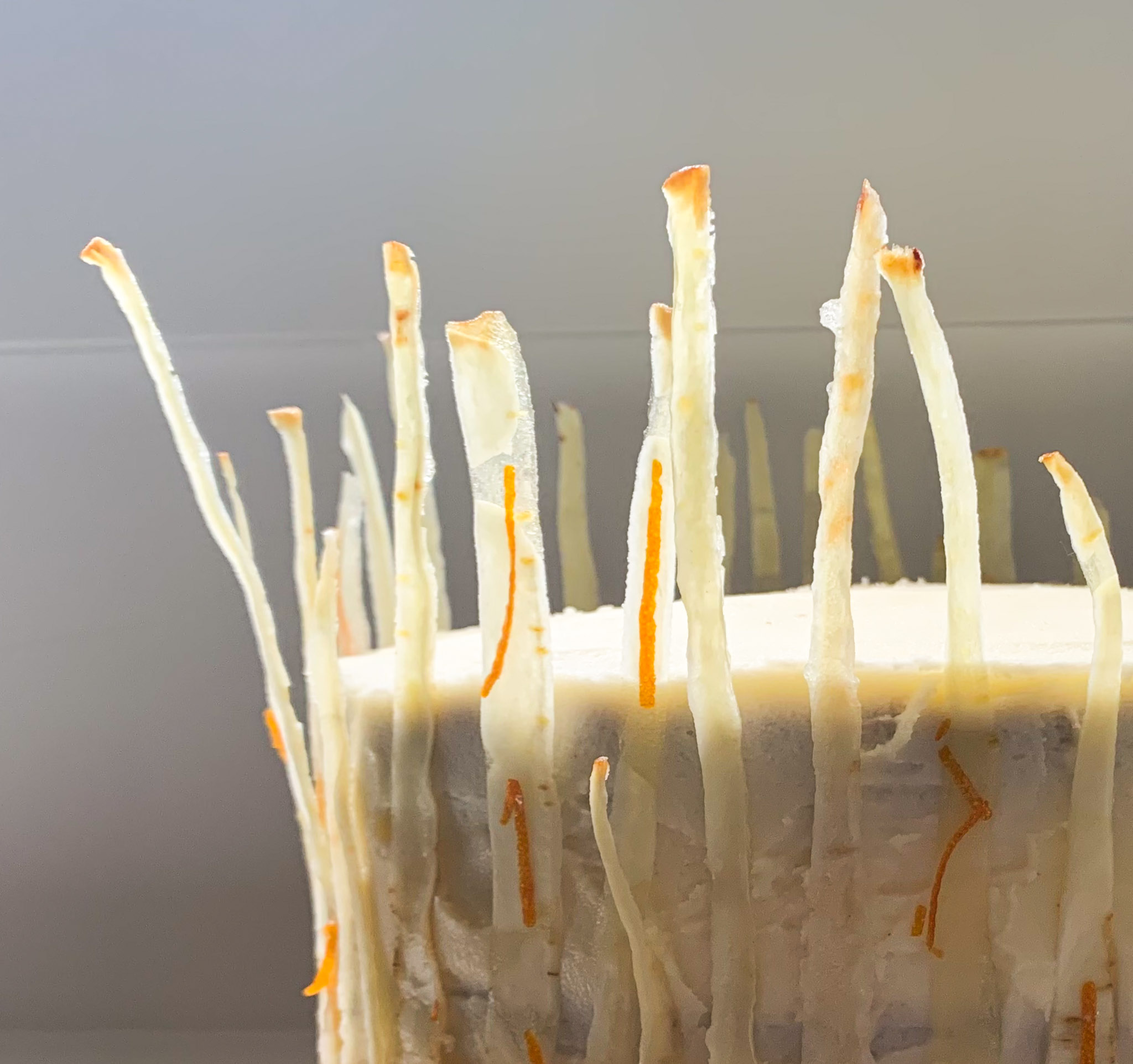 If you’d like to candy root vegetable peels, the Zoe Bakes recipe can be found here. Dorie Greenspan has a wonderful, 10/10 parsnip cake, studded with chopped cranberries and pecans, that is perfect with these candied parsnips. You can find the recipe here.