In the middle of my parent’s property on the edge of the Saint Mary’s River stand two tall spruce trees, growing together, intertwined.

They began as many trees do, small and seemingly well spaced apart. In the summer of 1999, a big wedding tent was erected and tables were set up, exactly where the two trees were standing. James and I were getting married, and we had chosen to celebrate on the piece of property where one day my parents would build a home. But back then it was a gently sloping grassy hill with the odd spruce, tamarack and apple tree dotted around. We stood around these little trees, inconveniently situated between what would be the dessert table and where the guests would be sitting. But they were sweet, those little trees, all alone in the middle of the tent. So we left them, and someone along the way named them James and Lindsay.

My Dad asked me recently, as we sat drinking coffee and glancing out the window, which one I thought was James, and which one was Lindsay? Their branches are twisted and intertwined now, an evergreen mound stretching twenty feet high. It’s hard to tell where one stops and the other begins. But if you look carefully, you can see one tree top is slightly higher than the other. So I concluded, between sips, that the taller tree is James. The slighter shorter, she’s Lindsay.

“That would make James a red spruce,” said my Dad, our in-house tree whisperer. They looked exactly the same; I was skeptical. Soon he was at my side, reading from his copy of Trees of Nova Scotia. “Red Spruce are Nova Scotia’s provincial tree, their wood makes for valuable lumber and pulpwood, boatbuilding and ladder stock. But they also make lovely violin backs and guitar fronts,” he added.

“You, you’re a white spruce,” he said. “They’re also called skunk spruce or cat spruce, because their needles emit a rank odour when crushed.”

They have their needles in common. Both are four cornered, corners felt as you roll a needle between a forefinger and thumb.

My Dad was right. Later that day I went for a walk to collect spruce tips. I wanted to make spruce tip syrup to use in a cocktail before dinner. Spring arrived late, which means that now, in mid-late June, the woods are full of ‘frosted tips’ – bright green needles dangling off the end of forest green boughs like elegant hands with painted fingernails. The tips have a floral, almost lemony flavour, that becomes stronger and more astringent as spring turns to summer. Now is the time.

I moved from tree to tree, pulling the tips from a variety of boughs. Balsam firs have soft and fragrant needles. Spruce needles are clustered tightly and grow in a circle. I rub them between my fingers, feeling the four corners, noticing how some smell lemony, while others smell like cat pee. I leave the white spruce needles behind.

It takes all sorts to fill a forest. Here on the eastern shore of Nova Scotia most trees are hearty. They grown on hard granite or slate. The wind is harsh and the soil is wet. The sun doesn’t always reach them, but when it does, they thrive. And sometimes they grow together, lifting each other up, despite the shape of their needles or their aromas when bruised. 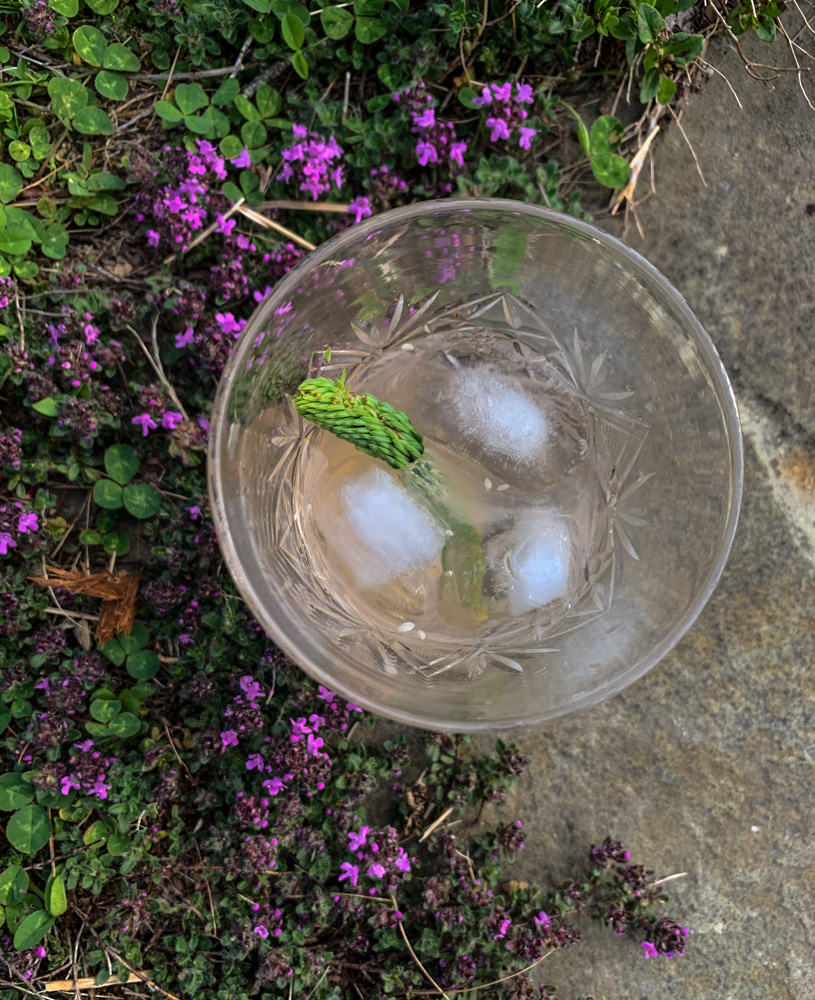 Combine water and sugar in a saucepan and bring to a boil, stirring to dissolve the sugar. When sugar has dissolved, turn off the heat and add the spruce tips and lemon juice. Cover and set aside. Leave syrup to cool for up to 24 hours. The longer you leave it, the more fragrant it will be. Strain syrup into a jar, cover and refrigerate for up to 4 months. Discard the faded spruce tips.

Or, add a little interest to sparkling water with a splash of syrup. It would also be lovely in a hot lemon, in place of honey.