By Lindsay Cameron WilsonAugust 5, 2021No Comments 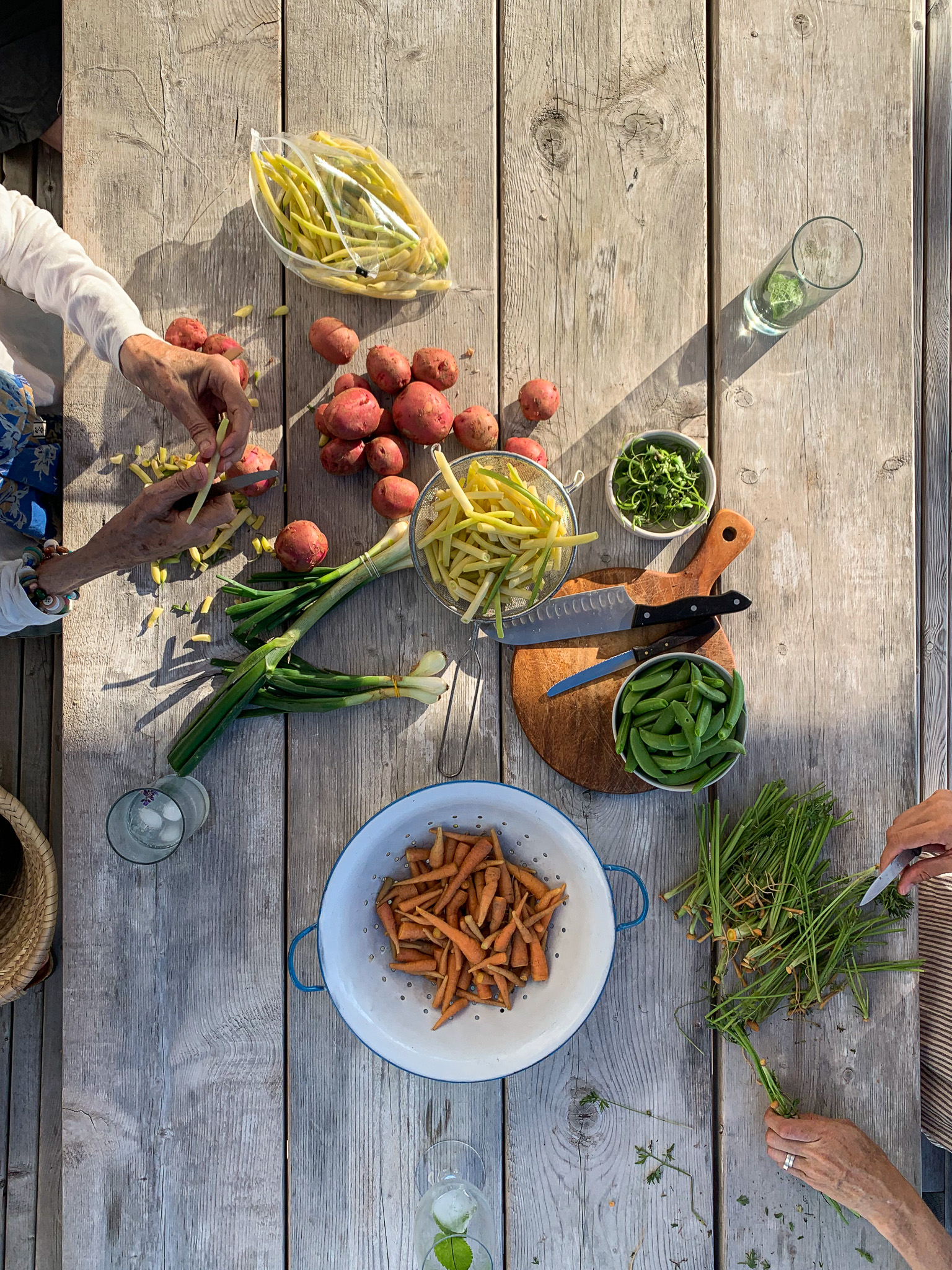 We’re sitting at the picnic table with summer laid out in front of us: tiny arthritic carrots, a mound of yellow beans, floppy green onions, sugar snap peas with curly tendrils still attached and a scattering of new potatoes still warm from the ground. We trim ends and brush off dirt, then rinse everything in the sink. The vegetables will become Hodge Podge, our third batch this week.

Hodge Podge is a stew of sorts, where vegetables simmer in the same pot of salty water, added in stages depending on how long they take to cook, then finished with lots of cream and butter. It’s a contentious dish here in this part of the world; some keep the cooking water for extra flavour and goodness, others drain the pot before adding the remaining ingredients. Some don’t add cream at all. I grew up calling the dish Pond Stew, which seemed normal to me – my maternal grandmother made it every summer and her maiden name was Pond. It wasn’t until I ventured out into other parts of (this corner of) the world and discovered most Maritimers make this dish in the peak of summer, and call it Hodge Podge.

Eating seasonally marks the passage of time. Here, asparagus comes in early June, pumpkins arrive in October. Farmers might play with varieties – carrots can be purple, or celery might pop up pink – but the rhythm of their arrival is consistent. Eating with the seasons can be equally soothing and mundane. We eat Hodge Podge because we like it, but also because this is what we do this time of year. It’s what my mother does, and her mother before that. The ingredients will stay the same; it’s up to us to evolve and change.

I’m re-reading a book called Family Life, a memoir by British food writer Elisabeth Luard. I was twenty-eight when I first read it, curled up in a window seat flying home to Nova Scotia for a summer visit. I was working at a cookbook store in London at the time, and chose the book from the shop’s new-to-me food writing section. It was an angsty time in my life; I was a journalism graduate working in a bookstore, overwhelmed by a city filled with purpose and possibility. I felt like I was watching a game of schoolyard double-dutch, swaying slightly as the ropes came around, but not sure how to jump in. Then my eyes locked on the back of Luard’s memoir, the part where she says she didn’t start writing until after her kids had grown, after she had lived a little. I remember burning through the pages on the plane, delighted by her bohemian ways (she sent her children to school on a donkey when they lived in Andalusia) and crying quietly when tragedy struck. As we exited the plane, a woman seated nearby asked what I was reading. “I want to feel all the things you were feeling,” she said.

This time around it’s different. I understand the nuance in Luard’s writing; the furtive references to her husband’s drinking, the poverty that I originally read as frugality, the life adventures that were undoubtedly shrouded in loneliness. I also notice the similes when describing her children: “when in hot water, they hung together like unstirred macaroni.”

My kids are hanging together around the pot of simmering vegetables, wondering what protein will be served alongside the Hodge Podge. “It’s a perfectly good vegetarian meal, we’ve always served it all by itself,” explains my mother. They laugh as they root through the freezer for frozen sausages. We’re evolving as a family.

Over Hodge Podge and grilled sausages, my sister reminisces about her childhood as a double-dutch champion. She had the rhythm, and once she jumped in, she could stay the longest. “But once you’re in,” she said, “you can’t get out.”

If you’re new to Hodge Podge, this is the perfect place to start. Once you’re comfortable, make it your own. You can even add cooked beets, like my friend likes to do. They’ll turn your Hodge Podge a gentle shade of pink, something, I’m sure, Bridget Jones would do.