By Lindsay Cameron WilsonJuly 4, 2017No Comments 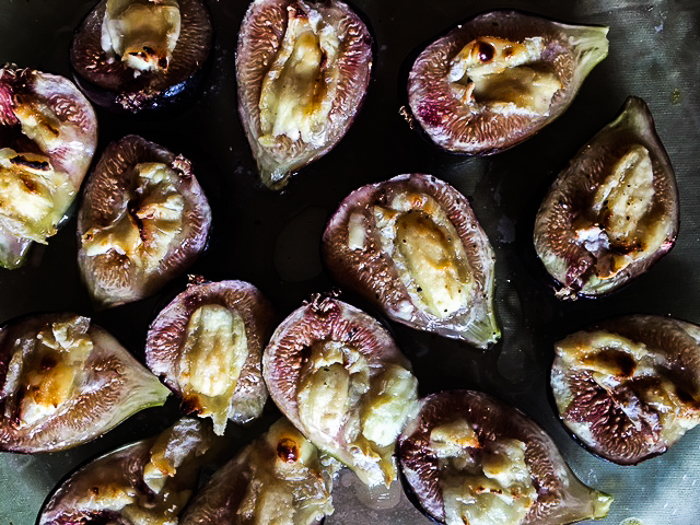 I’m in France on a Wilson family holiday. There are 17 of us staying in an old home in the midst of a vineyard in the Languedoc region. The area is full of craggy mountains, castles, Abbeys, windy roads, gorgeous towns and grape vines. Lots of them. I wonder where the local vegetables are grown; the grape vines stretch for miles and miles…

Long, defunct barns reach outwards on either side of the house where we are staying. Ivy stretches over the dusty barn windows; we can see old tools and machinery inside.

It sounds like there are a million maracas shaking violently in the trees. It’s cricket mating season.

We hang our clothes on a line stretched behind a few pine trees. While pinning wet socks I spotted a fig tree nestled in the pines, drooping with both green and purple figs. I know nothing about figs except for the tender few I buy from our specialty grocery store, flown in from somewhere far away. And there they were, some ripe for the taking.

Down the road is a chèvre farm. We visited before dinner, in the golden hour, when the grape leaves surrounding the property were full of late evening sun. The goats were being milked; their bleating drowned out the crickets. We bought yogurt, soft cheese and harder, aged, aromatic rounds. A variety. The farmer was patient with my french; he chatted away, filling me in on the politics of farming in France and the joy of a life where the bank never calls you.

One night we passed a honey farm – a miellerie – while bicycling up, up, up a near bye windy road. I was too breathless to stop. But now it’s our last day. We bought their honey at a local market. It’s as close as we’ll come, this time.

Up above the miellerie is a little winery called Domaines des 2 Clés. We knocked on the door one afternoon and the young winemaker answered. He said he and his wife had bought the vineyard two years before, after studying and working in France, California, Germany and New Zealand. He is from Germany, she is from Burgundy. Now it’s just the two of them, growing, harvesting, and making their own organic biodynamic wine. Would we like a taste?

As we sipped a barrel sample from their second vintage, he told us the hardest part in winemaking is the notion of filo rouge, or leitmoif, where a memory occurs again and again in a person’s life, in this case a flavour memory. He tries to erase the filo rouge as he tastes in order to embrace or discover something new. Each year the vines are the same, but variables change the flavours: Weather. Grape combinations. Barrels. Time. He wants to embrace these differences. Celebrate them.

I thought about this notion as I pulled the figs out of the oven this morning. I had cut them in half, topped them with the chèvre from up the road and drizzled them with honey from the miellerie. I put them under the broiler until the cheese had browned a little and the figs were juicy and soft. The tang of the cheese, the sweetness of the fresh figs, the touch of floral from the honey –  I was making a flavour memory.

But tomorrow I’ll be back in Nova Scotia where there aren’t any figs. The goat cheese is a little different, and so is the honey. But peaches will be ready soon. They’ll be delicious with a spoonful of NS goat cheese and a drizzle of our honey. I won’t be hanging out laundry by a fig tree, or eating under the stars with my big, extended family. But that’s ok; memories shift in order to embrace something new.

PS – The latest episode of The Food Podcast – Episode 18, Father’s of Confederation – launched while I’ve been away. We listened as a family while driving on one of those windy French roads, and guess what? My kids wanted to stay in the car after we arrived home to listen to the whole episode.

The episode ends with Jill and Matthew Barber’s song, One True Love. The song filled our car, flowed out the windows and melted into the air. It was a moment I’ll never forget.

You can listen to the episode here.