Pine Needles are Having a Moment

By Lindsay Cameron WilsonNovember 23, 2016No Comments

Now, in retirement, he and my mother have a home on a river, and are surrounded by them. But they are never just trees. They are tamaracks. They are fir and cedars. They are pines, spruce, black spruce and maple. They’re oak, elm and birch. And each one has purpose.

The deer sleep on soft beds between his alders. My kids and their cousins run down the soft mossy paths between the spruce. Late in the fall he trims the base of a mix of evergreens and spreads the boughs over the garden to keep the plants cozy over the winter.  The pheasants nestle in the base of spruce with the crows and wood pigeons.

Growing up I wouldn’t have called him a romantic. But that was before I spoke many languages of love.

Last month my father and I were walking through the trees, touching them as they brushed our fingers. The fir branches were soft, unlike the stiff spruce with their needles that spiralled around the branch. The pine needles were long and clustered; he told me he always had a pine Christmas tree growing up. They dried faster, but he loved their floppy boughs.

I’m sure we had these conversations when I was little, when I didn’t care as much. But for some reason – maturity?  a desire for to know the story in all things? or because we inevitably morph into our parents at one point or another? –  I want to put these details to memory. They bring life to the forest. And, you never know when you’ll need to pull tree knowledge from the database.

Like when you’re dining at The Clove Club in London.

The Clove Club started out as a London supper club. Now it’s one of the top 50 restaurants in the world.

But that’s not why I had to go. The Chef, Isaac McHale, is Scottish and favours foods from his homeland. This is what theworlds50best.com has to say about him:

Scottish chef McHale has devised a five-course and a seven-course tasting menu featuring signature dishes of flamed Cornish mackerel and buttermilk fried chicken and plenty of delights from his homeland, such as haggis doughnuts.

I’m a Nova Scotian, with some Scottish thrown in. I grew up eating my father’s haggis and listening to his bagpipes. London is a city full of incredible ingredients and creative chefs. Sometimes it’s hard to see to the forest through the trees. But when there’s a supper club turned top restaurant, now housed in the old Shoreditch Town Hall not far from where I once lived, featuring food from the homeland, all becomes clear. We made a reservation.

And you know how Chef McHale served his buttermilk fried chicken? In a basket of white pine needles. 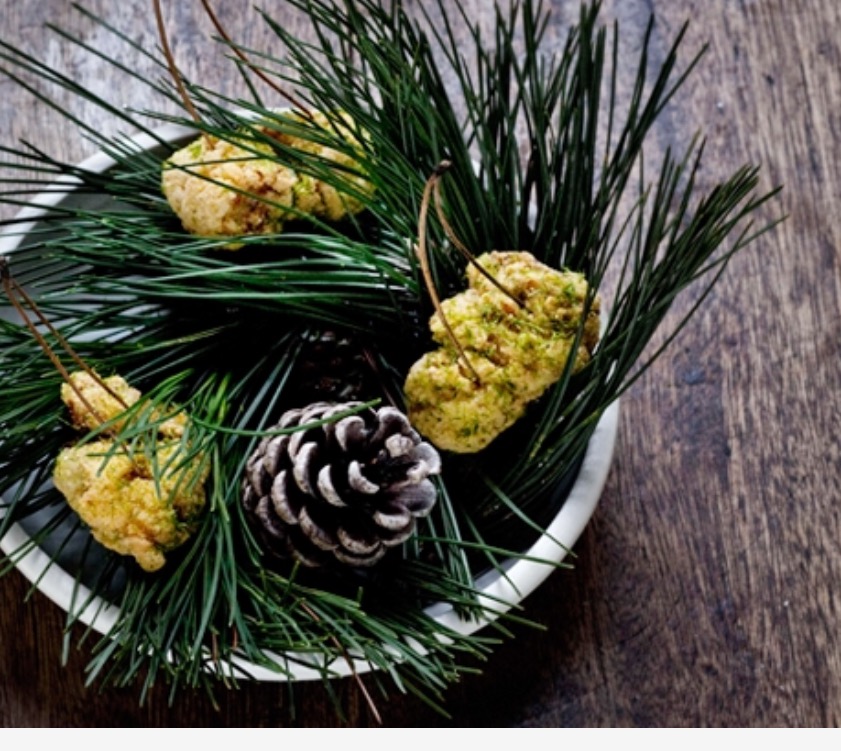 I was in London on a mother-in-law / sister-in-law trip. All five of us are good eaters. We’ll go high or low. We hit the sample sales and spend hours at M&S. We’ll sit at the Connaught for a cocktail, or drink white wine on the bed in the hotel room. We linger at the National Portrait Gallery then play cards in a café. Needless to say, we’re the kind of people who appreciate a basket of pine needles, especially when delicious bundles of buttermilk fried chicken are nestled within. And for me, the look, the texture and the ‘use what you have’ philosophy warmed my 50% Scottish heart.