By Lindsay Cameron WilsonNovember 26, 2020No Comments 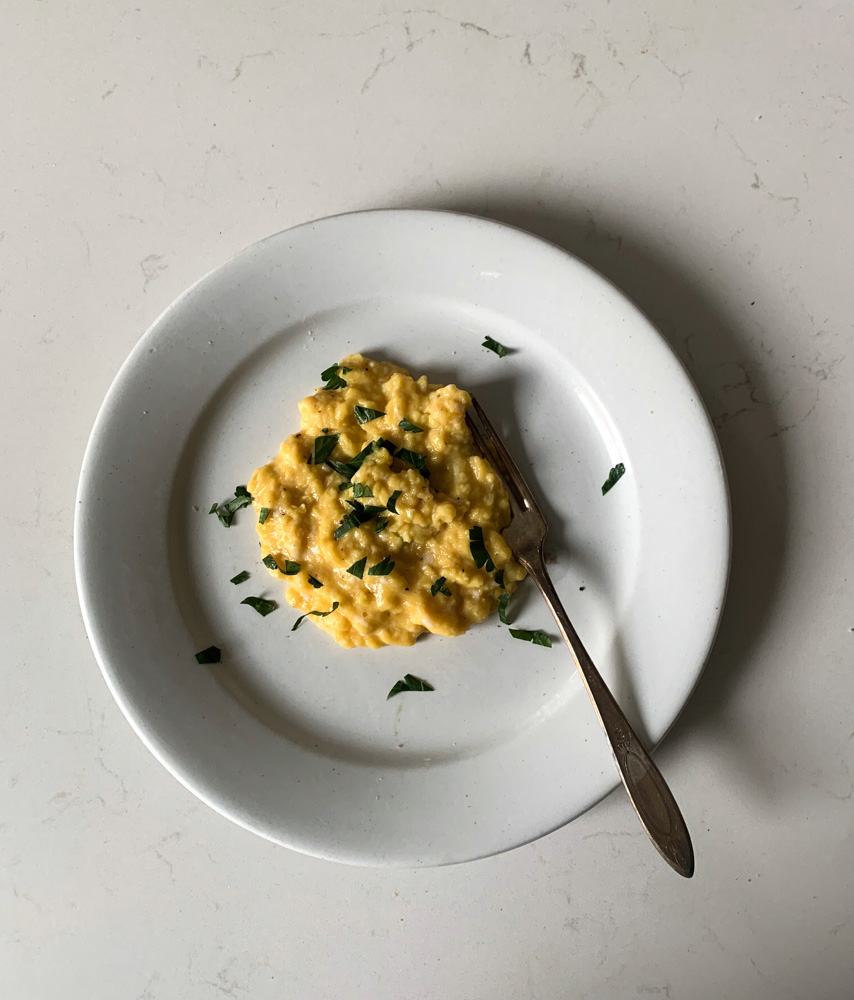 Before the pandemic, before moving back to Canada, before children, I tagged along on a trip to the Scottish Highlands with my sister and her husband. We hiked in the forest just when ancient rhododendrons were in bloom. We swam in rivers and were eaten by midges. We stumbled upon a sheepdog trial, where border collies weaved up the rocky mountainside, herding sheep around fences and gates as their handlers whistled below. We visited pubs, castles, and looked in vain for the Loch Ness monster.

But know what I remember most? The scrambled eggs flecked with smoked salmon that we were served one morning at our B&B. They were soft and velvety, with just a touch of smoke. I asked our host how she made them. “Ah,” she said, “The secret is lots of butter, and the eggs mustn’t ever touch the bottom of the saucepan.”

Scrambled eggs vary from kitchen to kitchen, country to country. My mother is famous for her double boiler, soufflé’-like version. My sister begins with sautéed onions, and always adds a squeeze of lemon, grated aged cheddar and a splash of Worcestershire sauce to the eggs before stirring them gently through the onions (as my grandmother did). I’m usually caught between methods, with often questionable, not very velvety results.

Until I made breakfast with my eleven-year-old godson, Nate.

“Gordon Ramsay always adds butter to the eggs before he cooks them,” said Nate one summer morning. “The heat is barely on,” he added. “And you have to stir them the whole time.” Nate, at eleven, already possessed the wisdom of a celebrity chef and an elderly B&B owner.

I pulled up a chair and asked for a demo.

He cracked two eggs into a saucepan, gave the eggs a whisk, then added a knob of butter. “One tablespoons for two eggs,” he said. “The butter will slowly melt as the eggs are cooked. And don’t add salt till the end! It makes the eggs watery.”

I’ve been doing it wrong all along.

Using a rubber spatula, Nate stirred and folded the eggs over the lowest heat, never abandoning the pan, as if he were making a risotto. When the eggs were just scrambled, he took the saucepan off the heat, explaining that the heat of the pan would continue to cook the eggs. We didn’t want to overdo it.

He finished them off with a few twists of pepper and a big pinch of salt.

Nate’s eggs were soft and velvety, and, I have to say, they barely touched the bottom of the pan.

This morning my mind was swirling, so I made Nate’s eggs. They force you to stand, stir and just breathe. I tried to leave them three times in the early stages – to wash a pot, to quickly turn over the laundry and to answer the front door, but I knew I “mustn’t”. It was painful at first, but eventually, the eggs began to swirl like the snake’s eyes from Robin Hood, and I was lulled into a meditative state.

Since Nate’s demo, I’ve discovered that Ina Garten likes to add a big lump of truffle butter to the final stages of stirring. Gordon Ramsay prefers a dollop of créme fraîche. Our B&B host favoured thin slices of Scottish smoked salmon. I like the tang of aged cheddar added at the halfway point, to give the cheese time to melt along with the butter. So I snapped myself out of my stirring trance, just in time to add the cheese. The result was a velvety, buttery, tangy serving of scrambled eggs that barely touched the bottom of the saucepan. 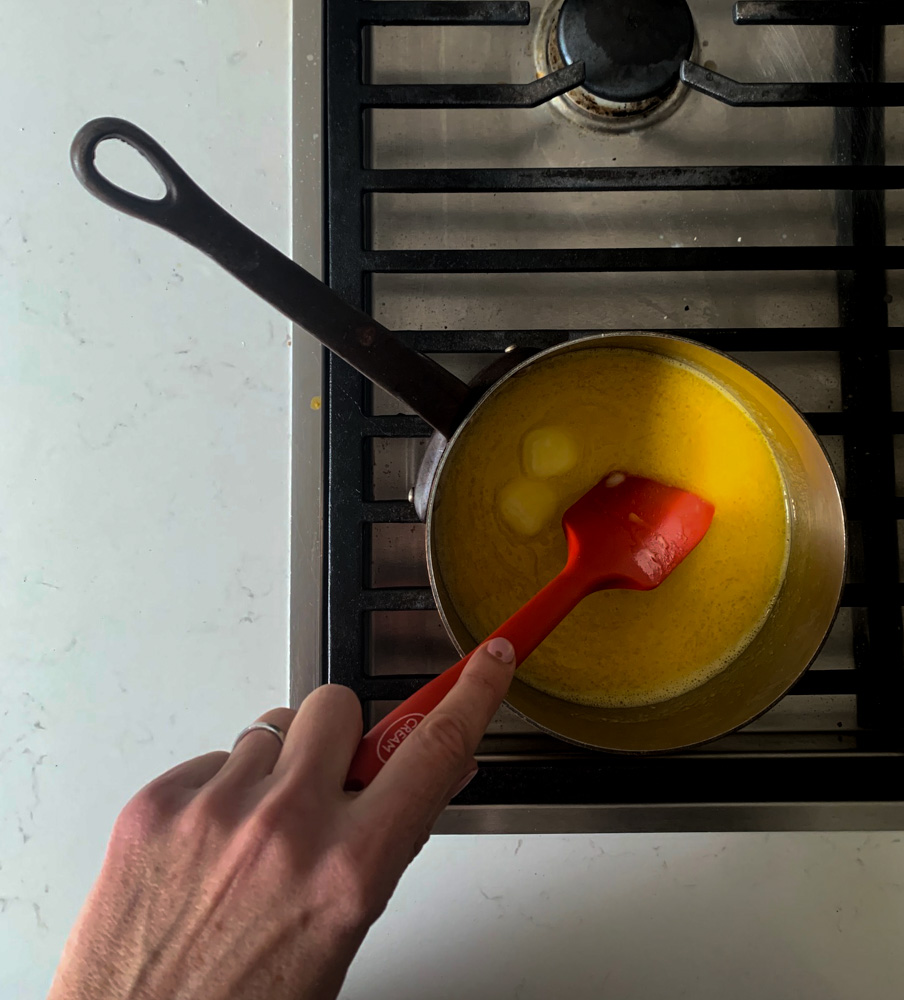 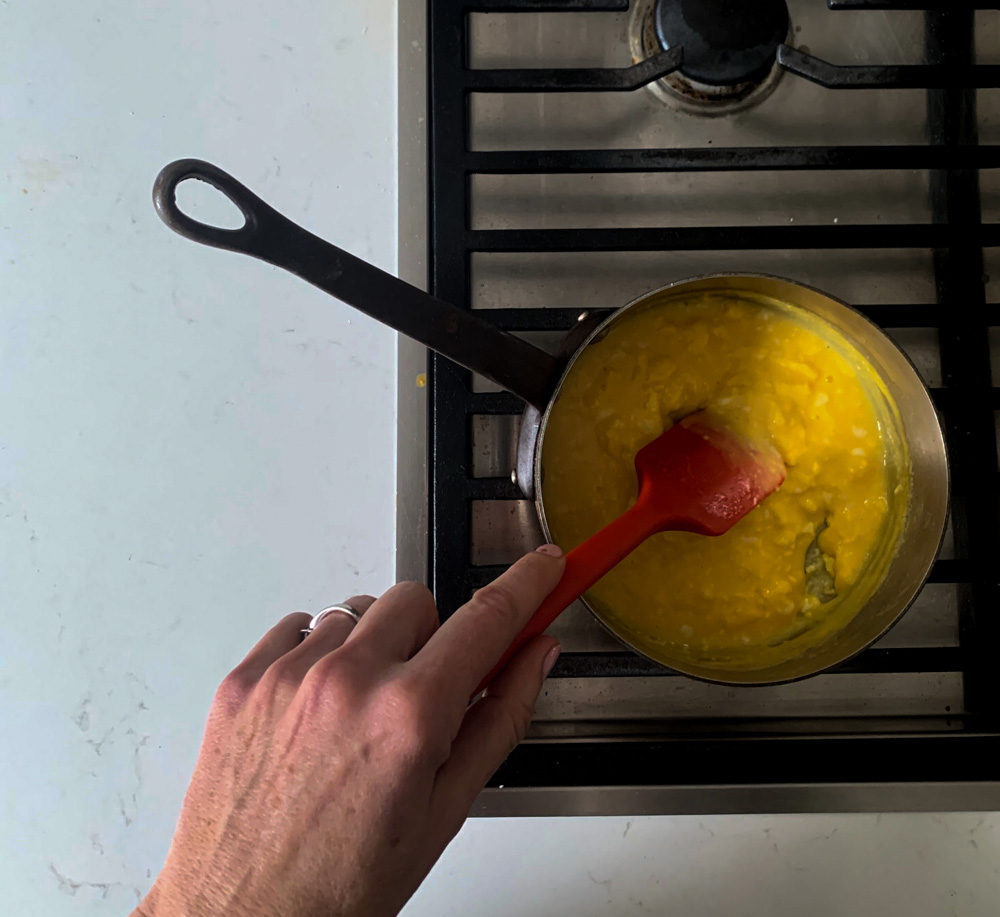 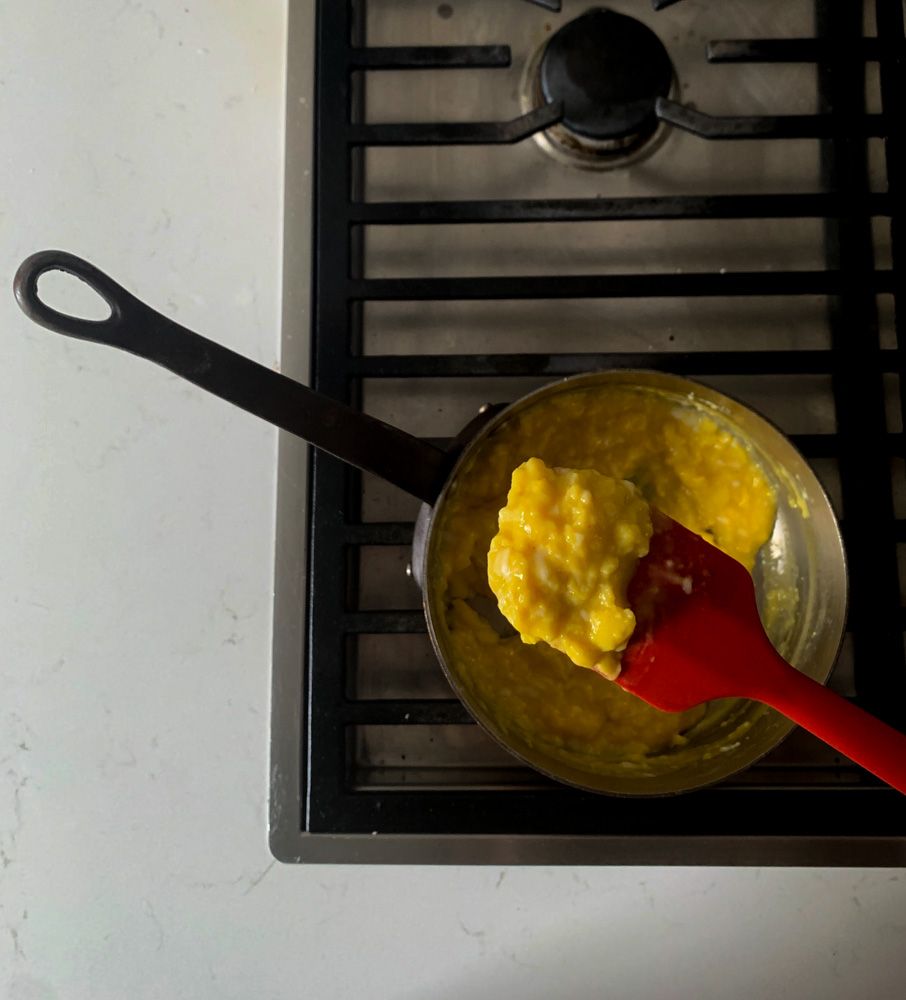