By Lindsay Cameron WilsonFebruary 15, 2017No Comments

Do you remember the scene from Sound of Music when the Reverend Mother says to Maria, When God Closes a Door He Opens a Window?  I think about that all the time. It doesn’t mean the Swiss Alps will be right there waiting for you, just outside the window. It doesn’t mean life is easy. It just means there’s another view, and who knows, that view might be better than it was before.

I explore this notion on Episode 15 of The Food Podcast. Luckily two special people agreed to explore it with me – Aran Goyoaga of the site www.cannellevanille.com and Paul Graham, author of the memoir In Memory of Bread. Aran is a Basque – American living in Seattle; Paul lives in upstate New York. They’ve never met. But they have something in common – both learned they could no longer eat gluten, long after their lives were shaped by the stuff. This episodes explores how they have approached life – gluten free. There were struggles (lots of hot metal launched across the kitchen) and there were victories. It’s real life.

Aran called her blog Cannelle et Vanille because cinnamon and vanilla were the flavours of her childhood. Her grandparents owned a pastry shop and those ingredients were woven throughout just about everything, from pastries to custards to pastry creams. She says her favourite was Arroz con Leche -rice pudding – made simply from rice, sugar, salt and cinnamon. The dish defines her childhood, and thankfully, it’s a memory she can recreate today, because rice pudding, after all, is gluten free.

Paul Graham touches on food and memory in his memoir. He poses the question – if you can no longer eat a food from your childhood, will you lose that memory altogether? This notion sent my mind spinning with questions which I raise in the episode-  “Do your food memories fade away like Marty McFly’s family photo in Back to the Future? Or can we capture those memories in others ways through, perhaps, just a touch of cinnamon? Are our memories meant to be exact? Are they a perfectly measured cup of flour, smoothed over with the flat side of a knife? Can we replicate them, cup for cup, every time we taste a food from our past? Or perhaps memories are meant to be a overflowing spoonful, not precise, a little unclear. And maybe even a little messy.”

These are questions to be answered. But in the mean time, let’s make Aran’s Arroz con Leche. It might trigger a memory, or perhaps make a new one.

In a saucepan, slowly heat the milk, salt and the cinnamon stick. Bring it to a low simmer, the lower the better.

Add the rice and the sugar and stir. It has to cook for about an hour to an hour and fifteen minutes in low heat and it must be stirred often, every 5 minutes or so. We want to keep the heat low enough that it doesn’t burn the sugar but high enough that there are small simmer bubbles forming.

The milk will start to turn a little caramel color and that is due to the caramelization of the sugar. A thin layer of fat will also form on the top. Keep stirring and that will disappear although personally I love when that happens.

*Lindsay’s note – I didn’t have a cinnamon stick so I simmered the milk with a chai tea bag, hence the tiny bits. Good things happen when you improvise. This is so good. 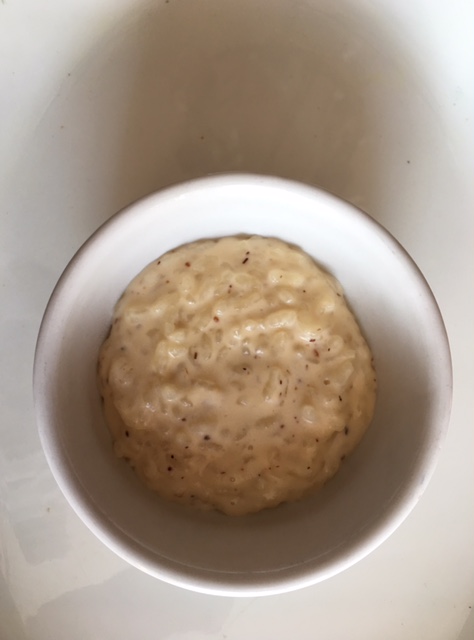