By Lindsay Cameron WilsonJune 1, 2017No Comments 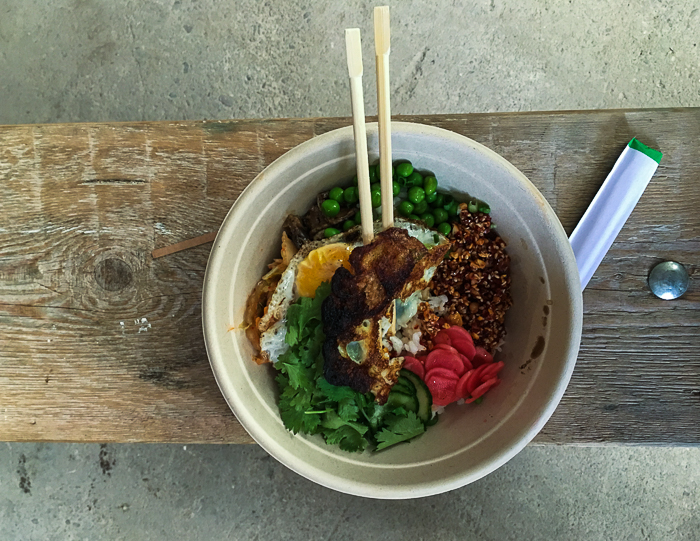 Especially when you’re in Ireland at a food and literary festival. You’re there to harvest stories for your podcast, you’re jet-lagged, there are hundreds of people milling around, but you don’t know a soul.

My old trick was to wear a jumpsuit. Everyone loves them. When I wear one, eventually someone (usually in the ladies bathroom line) will ask me about it. Then I have a friend.

When in Ireland, I’ve learned the key is to wear a jumpsuit, order the best food around and start talking. This epiphany came on the first night of the festival. I was in a big barn tucked in behind Ballymaloe House where the festival was taking place. The barn was full of long picnic tables surrounded by food and drink stalls. Irish baristas. Cheesemakers. An oyster shucker. A lobster sandwich maker. A bean to bar chocolate seller. A probiotic keffir maker. And best of all, a rice bowl maker called White Mausu.

The place was packed. Clusters of friends drank and laughed. Litfest is both a community event and a literary festival. This means chatting with random people (let’s be honest – networking) isn’t expected. Conversations have to be organic.

So I stood in a long line for a rice bowl. When I reached the front, a kind, red-headed bearded guy named Tom took my order. Ordering was easy; they only served one bowl. He asked where I was from in that friendly, Irish way. When I said Nova Scotia, he lit up.

“I’m a huge fan of the Trailer Park Boys,” he beamed. “Please talk like them for me!”

So I did my best Ricky. I swore at Tom, asked for a rum and coke, then handed him some money. Et voila, another friend.

A few evenings later I was back in the shed, hungry, but still feeling socially awkward. I ordered another rice bowl from Tom (it was that good), made some greasy jokes, then found an empty picnic table and sat down with my bowl. But the table behind me looked fun. I recognized a few faces from various workshops I’d attended. So I breathed in, picked up my bowl, did my best “hey there, is this spot taken?” and squeezed in.

The rice bowl broke the ice. Where was it from? Was it as delicious at it looked? And where was I from?

“How close is Nova Scotia to Prince Edward Island?” gushed one guy. “I adore Anne of Green Gables. Have you seen the new series on Netflix?”

We discussed everything from the food of County Cork, to foraging, to Ireland being the first country to legalize gay marriage by popular vote. We talked about Anne, and somehow that weaved into food education in schools. How can we stop talking about it and begin doing something about it? We made plans. We laughed. We promised to stay in touch.

And there you have it, the recipe for great conversations: a jumpsuit, a Nova Scotian accent, a rice bowl and a deep breath.