By Lindsay Cameron WilsonOctober 8, 2016No Comments 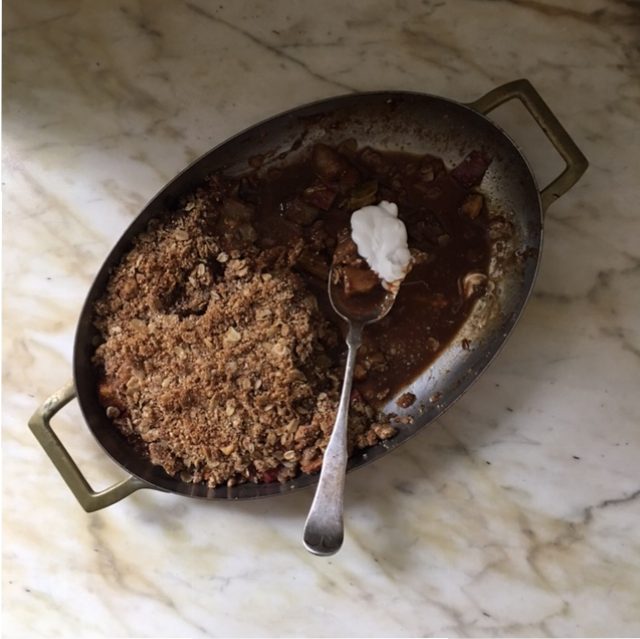 Juice! was the first cookbook I co-authored with my friend Pippa Cuthbert. I wrote about the process here – the rejection, the commission, and the bouncy hair and glowing skin that came from juicing. Neither of us were particularly healthy at the time; we liked to call our particular style of eating ‘healthy, by accident’. Flavour came first. If it was healthy, well then great.

My palate has changed since then. I prefer bitter, sour or salty to sweet. I like layers of flavours. Mixed textures. The greener the juice the better. A pineapple and grape combination might make my nose wrinkle.

Closing the sweet door means opening a big, bright and exciting new window. This happened last week, when my friend Tori came over for coffee with her gorgeous baby boy, Giovanni. I lived for moments like this when my babes were young. A destination. Coffee. Breakfast-y food. With this in mind, I made a pear crisp for her. Crisp is the kind of thing that tastes so good in the morning. Or noon. Or night.

I chose a recipe from the minimalist baker that used up my copious amounts of all things coconut – coconut oil, coconut sugar and coconut flakes. It’s called ‘best vegan apple crisp’ but don’t be turned off by the V word. It just means the recipe doesn’t use butter or cream. I like it like that – I almost always have coconut oil and coconut milk lying around. I substituted pears for apples, and threw in rhubarb from the freezer. I pulled back on the coconut sugar, arguing that the pears would bump up the sweetness, while the rhubarb would keep things tart. I used walnuts instead of pecans. I added a pinch of cardamon along with the cinnamon, and added some coconut flakes to the topping. I left out the cornstarch. I couldn’t find it anywhere.

It was so good. But want to know what? The coconut cream was the highlight. If you keep a can of coconut milk in the fridge, you too will be ready, at any time, to turn coconut milk into the creamiest, dairy-free deliciousness a person has ever tasted.

To make coconut cream, take a 14oz can of coconut milk out of the fridge. Scoop out the firm coconut milk and place in a mixing bowl. Freeze or refrigerate the remaining clear coconut water in the can – it’s great in a smoothie. Add a touch of vanilla and a little bit of icing sugar to the bowl. The recipe calls for 1/4 cup icing sugar – I used half of that. Maple syrup would also work, but you don’t want the mixture to be too liquid. Or, omit the sweet all together. It’s up to you. Whip this up, then chill until ready to use.

I realize that this recipe isn’t the best example of my new and improved savoury life. But Canadian Thanksgiving is approaching, a time where rich food and sweet desserts reign. Why not harness that sweetness a touch? Celebrate the pear season (and tart rhubarb from your freezer). Enjoy the crunchiness of a nutty topping and the goodness of a very slightly sweet, creamy topping.

Healthy, by design. More or less.

ps – the copper pan came from my neighbour Tony, an avid collector of all things old and gorgeous. Tony makes a cameo appearance in the upcoming episode of The Food Podcast. Stay tuned…