By Lindsay Cameron WilsonMay 4, 2022No Comments 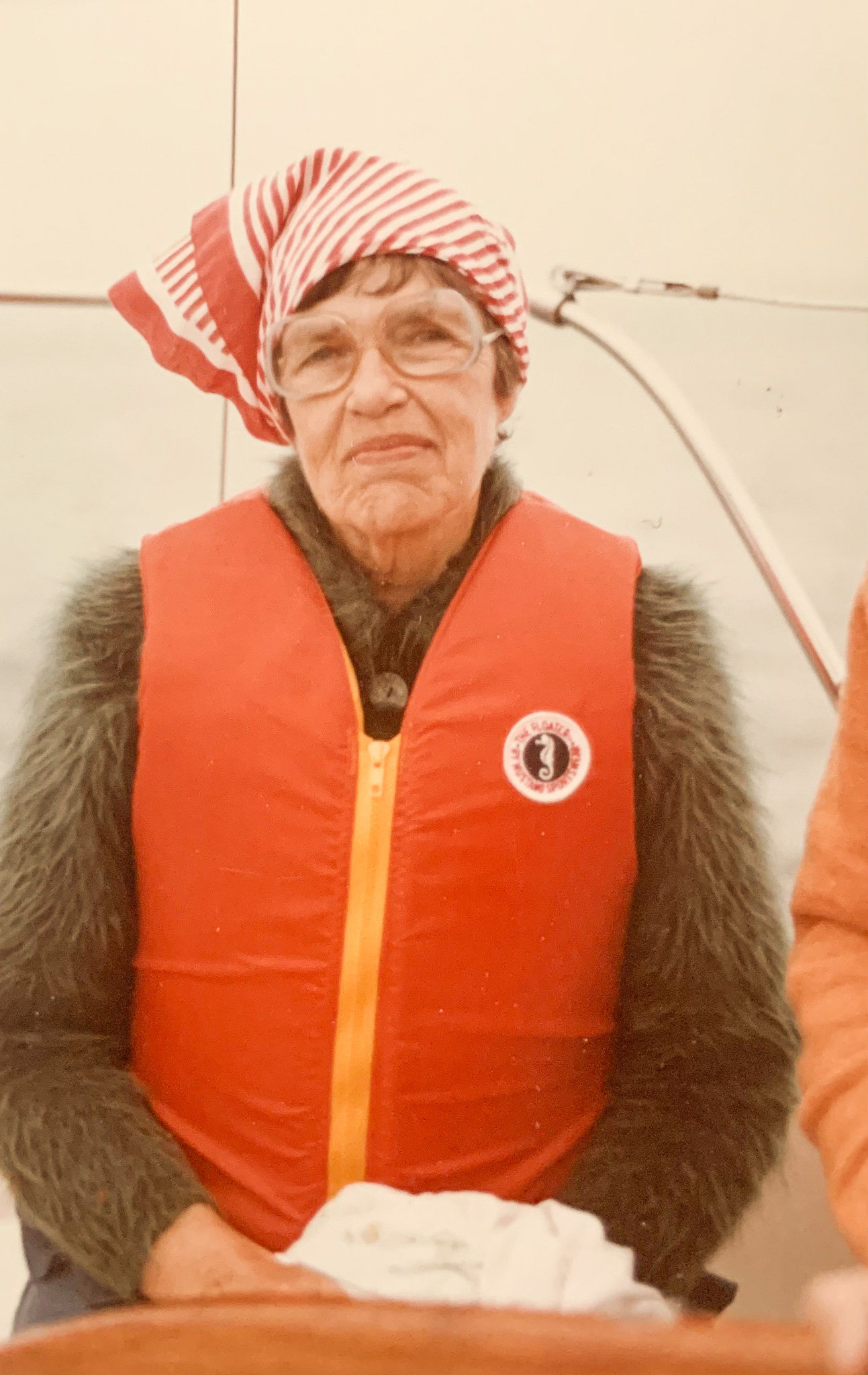 When my eldest son Luke was a baby, I visited my grandmother Vivian every Thursday morning. She thought I did too much with my days. Why not just come and visit me instead, she’d say. Sometimes we’d go for a drive so I could run into the grocery store while she sat in the car and watched the baby. When the weather was nice we went to The Chicken Burger, a local drive-in with spinning stools, a jukebox and picnic tables on the grass in the back. Behind the restaurant was a small home where the owner, an elderly lady, raised her children. She lived there by herself before she died a few years ago, in that little white house on the edge of the highway with crisp white shingles and forest green shutters, just like the restaurant. I’ve heard she closed the restaurant for a week every year to scrub down the walls, the deep-fat fryers, and get at the grease behind the appliances. They’ve been doing this since it opened in 1939.

We are sitting at a picnic table beside the little white house. Vivian is wearing white trousers with a matching zip up jacket. There’s stretch to the fabric, enough for the jacket to pull smoothly over her bust and down across her hips. She has white sneakers on her feet, with a hint of ankle socks peeking up above. She would have bought this outfit at The Village Green, a store in the mall down the street from where we are sitting. It’s an expensive store for the teachers’ pension she lives on, but she prefers to buy quality outfits that mix-and-match and will last through the years.

I leave Vivian with the baby at the picnic table to go and collect our order. She mothered three girls, two of them twins, born eight pounds a piece. She was a nurse during the war, then a high school math teacher when life called for day shifts. This is why she loves retirement. She plays bridge. She’s a lawn bowler. A painter, a quilter, a dinner planner, a careful shopper. And before macular degeneration set in, an avid reader too. She also loves visits with her grandchildren, and great grandchild. She relishes this free time.

I bring back a tray of chicken burgers wrapped in wax paper, french fries to share, a milkshake for me and a black coffee for her. We dip our fries into little white paper cups filled with ketchup and eat the soft burgers stuffed with boiled chicken meat chopped right there in their kitchen. When we’re finished she asks for the receipt from the meal. She scans the order, clicks open her purse, and hands me her share – $5.45, to the nickel. I protest, it’s my treat. No, she says, let’s keep it fair. I take note; her frugality is why she can shop at The Village Green.

I drop her off at her apartment after we eat. She leans over for a hug then asks what I have planned for dinner. I don’t know, I say, chances are I won’t think of it until suppertime, when Luke is crying and I’m overwhelmed. Always know what you’re having for dinner before 11am, she says. Even if it’s just an idea, it will make your day all the better.

Luke is eighteen now. We’re sitting at the kitchen island, eating fried egg sandwiches, when a recently unearthed photo from the family archives pops up on my phone, one I’ve never seen before: our maternal grandmother, in a headscarf, 1980’s glasses, a teal mohair jacket under a lifejacket, on her son-in-law’s sailboat in the Bedford Basin.

We called her Grammy, but her name was Vivian. She was born along the Miramichi River in 1916. She didn’t grow up sailing; her father was a timber cruiser. But she was game for just about anything, and had a great outfit for everything. Our mom looked like Vivian, but that downward resting smile, that was all hers.

The photo quickly makes the rounds through my sister group chat.

Me: Who inherited that mohair jacket? I wish I had that mohair jacket. And remember the pale blue ultra suede suit she used to wear that was sadly ruined when she left the sunroof down in her Volkswagen Rabbit while going through the carwash? She tried to save her suit by crawling into the back seat as the water poured in. I would have done the same.

Lee (third sister): she has that smug look on her face that says, I made tonight’s dinner before I stepped foot on this boat. She always had dinner ready way in advance.

Sally (eldest): It was likely a Saturday so she would have prepared the usual Saturday night meal: baked beans, cottage cheese and sliced tomatoes and cucumber with a sprinkling of salt and pepper. And a glass of wine.

Jess (youngest sister): let’s do a gallery of descendants making their ‘I made dinner before the fun, I am winning at life’ face. Ideally they would be wearing a mohair jacket while sailing. Or a blue suede suit.

I take chicken from the freezer and leave it to defrost on the counter. I didn’t know what I will do with it, but that doesn’t matter. It’s an idea, and that is enough.

PS – Today I received a message from a reader asking me to re-share my ‘surrender salad’. I had forgotten that salad, and that season in my life. But it’s a good one. So here it is again, from the archives: A Surrender Salad.