By Lindsay Cameron WilsonApril 24, 2017No Comments 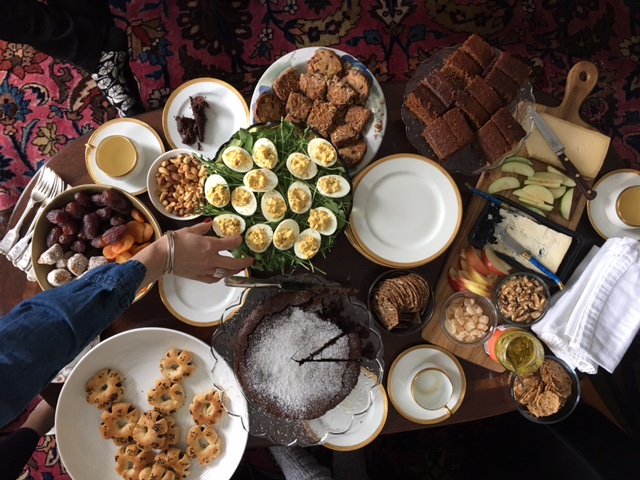 I wanted to sit down and gush about devilled eggs today. Their deliciousness. Their beauty. Their ‘not just at Easter’ appeal. How devilled eggs are secretly easy to make. But then I went through the weekend papers, the ones I missed while away over the Easter weekend. And there, smack dab on the cover of the Globe & Mail’s Style Section, was a full page of pastel, colour-blocked backdrops, showcasing the devilled egg.

So I’ve done what I usually do to avoid plagiarism:

1. I looked up how to spell p l a g i a r i s m.
2. I stuffed the papers into the recycling bag before I read anything and got any ideas.

So here we are. A fresh start.

My friend Melissa makes devilled eggs all the time. She even has one of those grooved platters that cradles each egg carefully throughout parties. I’m the one usually huddled by this platter, devouring these precious bite-sized delights.

My husband hates devilled eggs. He doesn’t mind the ‘devilish’ ingredients (the word ‘devilled’ first appeared in 18th century food writing to describe the deep, dark flavours added to the golden yokes, like mustard and pepper). He just hates the smell. In fact he hates the smell of all cooked, cold eggs, so much so he winces when recalling why. (Something about an old egg-salad sandwich found in the bottom of his backpack, when unwrapped, unleashed an unprecedented stink bomb in his grade four classroom).

Needless to say I had to make them when I recently hosted a women’s only tea party with our Syrian friends. He’d never know!

But I have a confession. I’m deeply intimidated by the process of hard boiling eggs. When people are criticizing non-cooks, they say things like, ‘he doesn’t even know how to boil and egg!’ How mean. Boiling an egg to a perfect, fluffy but firm, yellow and NOT blue doneness is a science, so much so I had to consult 3 cookbooks, online sources, my mother AND my mother in law. Some lower their eggs into boiling water, leaving enough water just to cover. Some leave exactly an inch of water above the eggs. Some bring their eggs to boil IN the water. Some leave the eggs, covered, in just boiled water for 10 minutes. Others say twenty. It’s stressful.

So I texted Melissa. This was her reply:

“Listen, if I can make devilled eggs then they are clearly not hard. The secret to the filling is Miracle Whip, and paprika on top. If you have Lawry’s seasoned salt that works well too. And if you feel fancy, pipe the filling with a big, fat icing tip. The most important thing is not undercooking the eggs. But if it doesn’t go well, egg salad finger sandwiches are always a hit.”

I love a back up plan. Armed with a loaf of sliced bread for sandwiches, just in case, I began the devilled egg process. I settled on my mother’s method. Six eggs, lowered into boiling water, just enough to cover. Pull off the heat, cover, and leave for 15 minutes. I think. Now I’m sweating again. I forgot to write it down.

Anyway, once cooked, I rinsed the eggs with lots of cold water to stop the cooking process. Then I left them in a colander and covered them with ice, just to be sure.

“I forgot to tell you the shell trick! After boiling, and after the ice bath, pop one egg into a small Tupperware container with a lid and shake! It’s way more fun this way.”

So I shook then peeled my practically already peeled eggs. I sliced them each in half and carefully scooped out the *perfectly cooked* (YAY!) yolks. I added devilish ingredients like mustard, pepper, mayo, apple-cider vinegar, salt and finely chopped shallot, much like Martha ‘s devilled eggs. But Martha uses light mayonnaise, which means she’s actually making what the internet calls ‘Angel Eggs’. (There’s clearly another newsletter to come on the origins of mustard as a devilish ingredient while light mayonnaise is angelic…)

Anyway. I don’t have a devilled egg platter like Melissa, so I nestled the eggs on bed of greens. I finished them with a dusting of paprika and a spinkling of dukkah. Dukkah is a Middle Eastern spice mix made with nuts, coriander, cumin and sesame seeds, ground together with lots of sea salt. The hope was to connect the eggs to Syria. When language barriers get in the way, food bridges the gap.

Devilled, angelic, muslim or agnostic, it doesn’t matter. Just make the eggs. And if it doesn’t go well, ‘egg salad finger sandwiches are always a hit.’