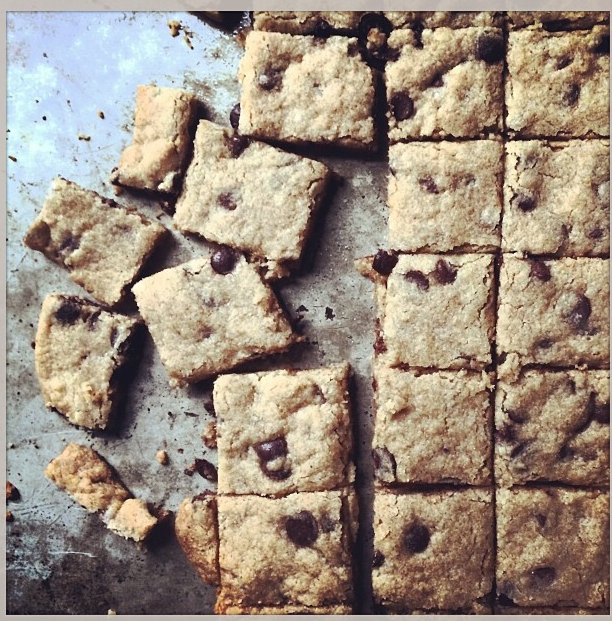 Certain recipes are a catalyst for relationships. I knew I liked that guy way back when. He was a great guy, and had tanned, salty skin from hours spent sailing. But really, it was his mother’s chocolate chip cookies that got me. She would make one giant slab, slice them into squares, put them into a tupperware, and pull that container out just when you wanted them most. Usually while sailing.

I married that guy, and several years later, I began work on a cookbook called Cookies!. Naturally I wanted the famous slab cookies in there, so I followed the recipe trail. My mother in law found the recipe in one of her Best of Bridge cookbooks. I emailed Best of Bridge HQ, and the women at the helm were happy to share their recipe with me. Isn’t that great?

And aren’t they photogenic? I posted this picture on Instagram a while ago, and the recipe was requested. It couldn’t be easier.

adapted from Best of Bridge

2 cups flour – I’ve used a mixture of gluten free flours , or half all-purpose and half whole wheat, or just regular old flour

Whip butter and brown sugar in a mixer for 5 minutes until really light and fluffy. This is the secret. We’re essentially making shortbread here. Stir in flour, then chocolate. When smooth, pat dough onto cookie sheet. If your sheet is quite large, just pat dough over half the surface. Not too thick, not too thin. The dough won’t let you go too thin anyway…

Bake in a preheated oven for 22 minutes, or until golden. Cool a little then cut into squares. Share them.