Back in the 70’s my cousin Sandy used to watch television in the basement for 48 hours a day. When he was hungry he’d go exploring in his mother Jess’ deep freeze. Before Christmas there would usually be a stash of Jess’ Cameron Family donuts in there. He discovered that if he perched one on the back of the television, the heat would thaw the donut perfectly.

Jess is still making her famous donuts. Jess’ mother, aunt Min, also made them, but she says the recipe came from my grandmother, Jimmy (Genevieve) Cameron. Jimmy made them in her Truro kitchen with her high school sunday school class. Jimmy was married to my grandfather Graham Cameron, aunt Jess’ uncle. That makes Jess my father’s first cousin. Sandy is my second cousin. I too watched television in the basement. Chicken stock was all we had in the deep freeze.

I don’t have a deep freeze, or a stash of homemade donuts. Things had to change, so over the holidays I asked Jess for a tutorial. Cousin Sandy was in attendance, along with his kids Leah and Jonah, cousin Sam, my sister Lee and my mother. Jess wore an apron. Like me, she “can’t do anything without one”.

The tutorial actually began the night before. Jess said the mixture needed to sit overnight to thicken, “or a few nights if you don’t feel like making them the next day”. My kinda recipe.

In a large mixing bowl combine:

Whisk well, then whisk in:

In a separate bowl, sift together:

Now into the egg mixture add 1 cup milk, alternately, little by little, with flour mixture. Stir well after each addition. “You’re looking for a firm but not too stiff dough”. Cover with plastic wrap and store in the fridge.

When you’re ready to make donuts, get your tools in order: a cast iron pan (or an electric fry pan, as Jess’ mother used), 1.5 litres of vegetable oil (or 2 1/2 lbs of lard if you’re old school), more powered ginger, a rolling pin, a little extra flour for rolling, a knife to cut the dough, a cookie sheet lined in newspaper then paper towel, a bowl of sugar, a cooling rack and a long fork-like tool for scooping donuts out of the oil. And of course a donut cutter. Jess bought hers at Thompson & Sutherland in New Glasgow. That’s where she and her husband returned their duplicate wedding gifts for seriously useful things like loaf pans and a donut cutter. Thank goodness. 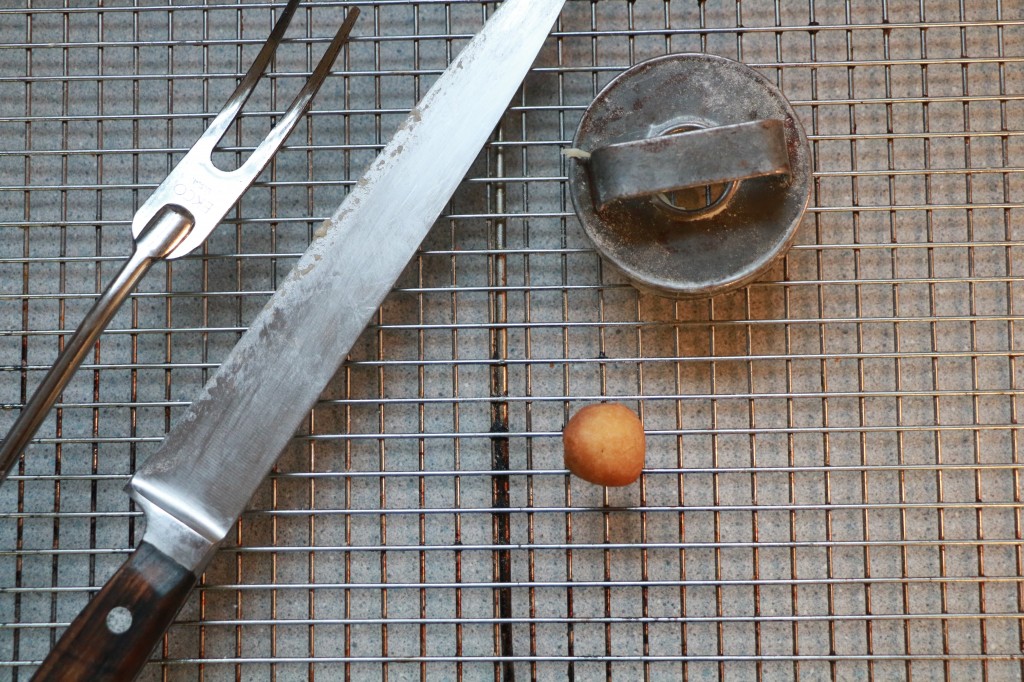 Heat oil -or lard- in the pan over high heat. Add a teaspoon of powered ginger to the oil. This will keep the oil from seeping into the donuts. Meanwhile, cut dough in half, put half back in the bowl, and knead the other half on a lightly floured counter top. Roll dough to 1/4 inch thick. Get down low to make sure it’s level. Cut dough with donut cutter. If you don’t have a donut cutter, use a cookie cutter or mason jar and a small cap, perhaps one from a screw top wine bottle. Keep going until you’ve used all the dough.

To test the oil to see if it’s hot enough, roll dough into a small ball and drop into the oil. If it pops up immediately, you’re ready to go. Quickly add donuts, about 6-8 at a time. When they’re cripsy and cooked on one side, use the fork tool to flip them over. As Jess says, “this is a fast process so it never hurts to have an assistant.”

Drain donuts on the paper towel, then turn donuts, one by one, in bowl of sugar to coat. Place sugared donuts on cooling rack. Continue, quickly, until donuts are all cooked. 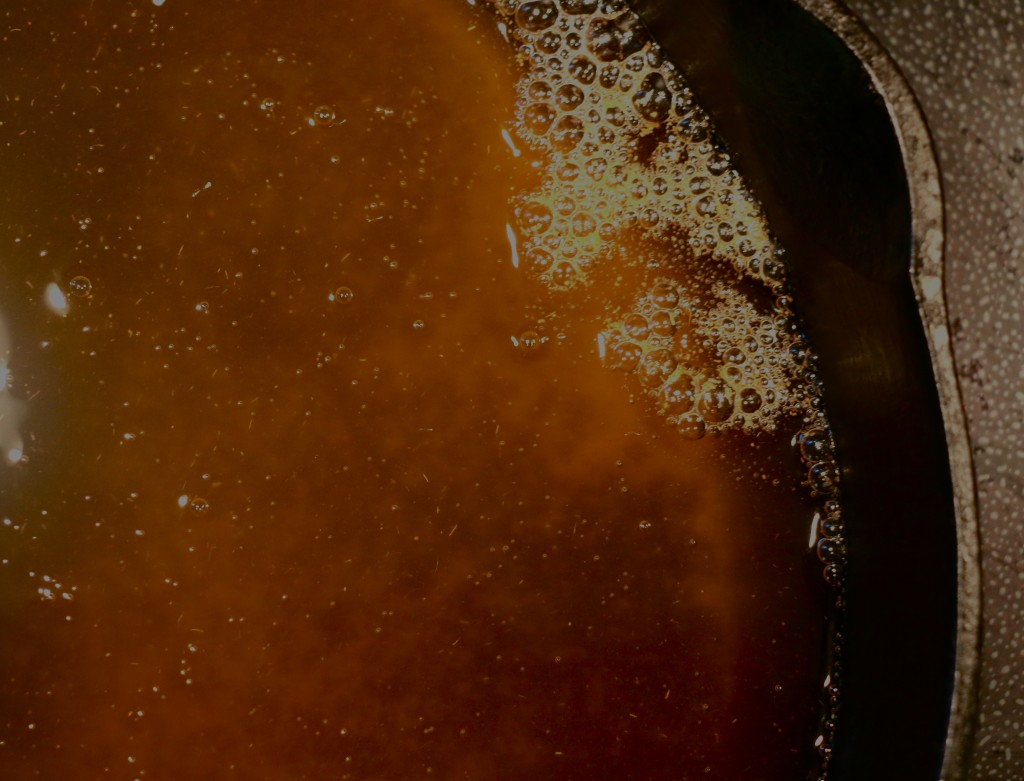 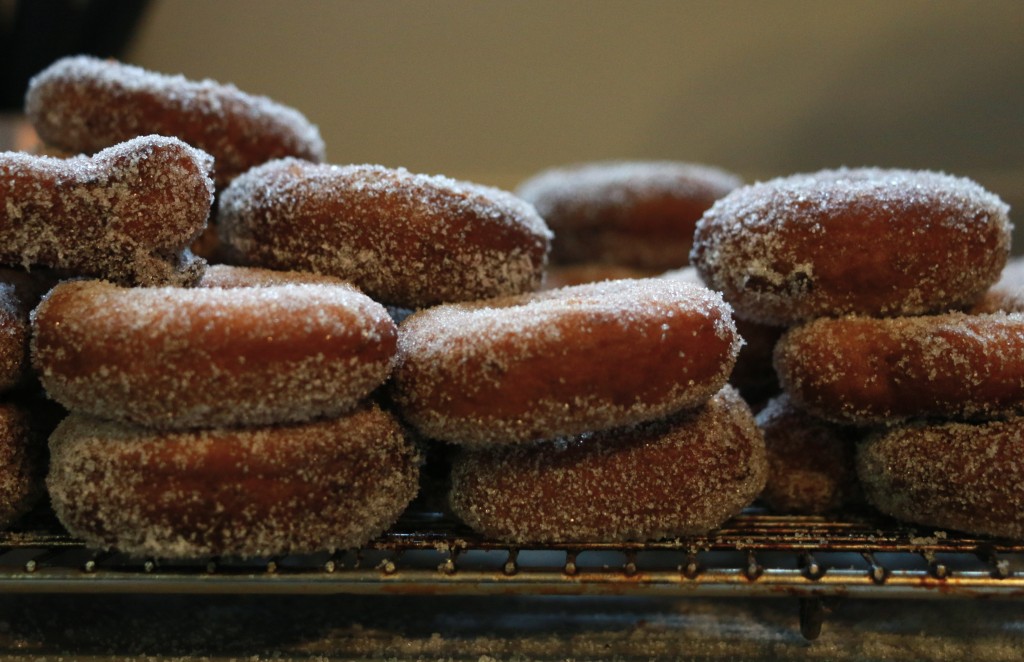 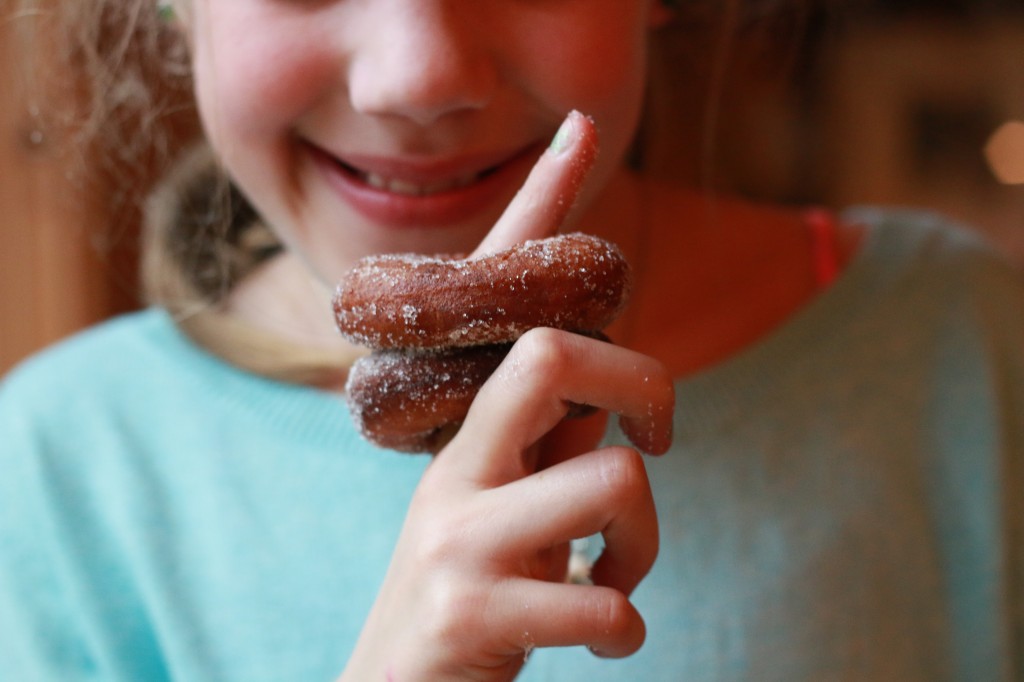 Or play ring toss then eat.