By Lindsay Cameron WilsonOctober 8, 2021No Comments 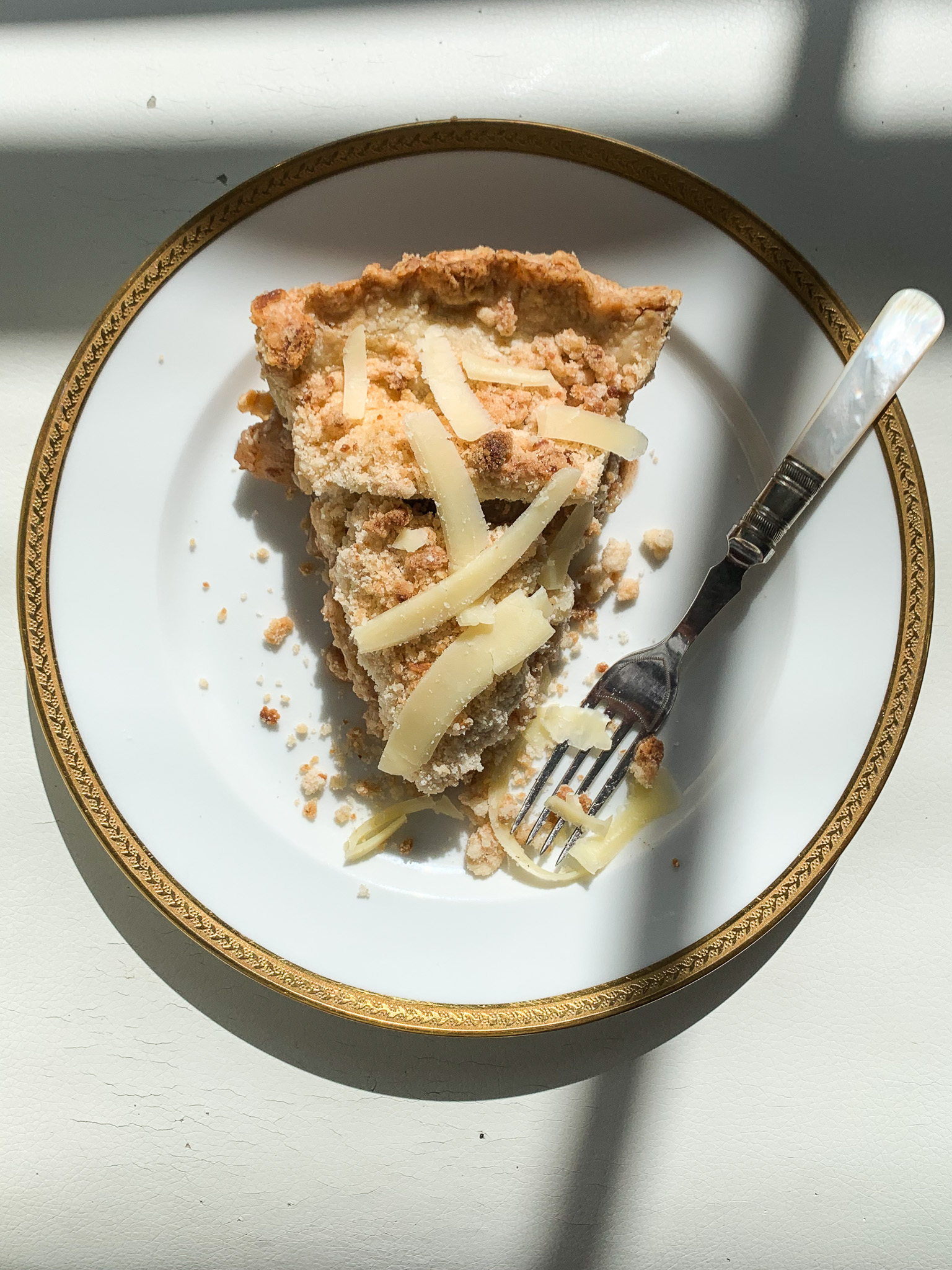 Late in August I discovered iridescent beetles on our young birch tree, methodically turning the leaves to brittle lace. The internet told me to spray the leaves with soapy water, or shake the branches until the beetles fall out. I feel protective of this tree. I want to run a fine-toothed comb through the branches like I have with my children’s hair so many times before. So I shook, I sprayed, I checked on it daily, all while listening to the podcast How to Fail with Elizabeth Day.

I’m always listening to something while I’m in the garden. Podcasts, audio books and songs now coat the small space: Anna Sale’s gentle questions live over by the gate, where I hand raked leaves through the spines of an overgrown spirea when we first moved in. The High Low lives where dandelions like to grow between the pavers under the patio table. Sinead O’Connor’s gravelly voice tells her story of beauty, abuse and reconciliation in and around a yellow peony, an impulse buy from the garden centre early in the summer. I hope it survives; I hope Sinead survives too. Over in the goutweed along the fence lives many episodes of Desert Island Disks, peppered with a handful of therapist Ester Perel’s Where Should We Begin podcast episodes. Listening to the raw and intimate details of other couples’ lives makes a goutweed invasion relative and bearable.

It’s harder to isolate the stories that coat my path inside the house. I’ve lapped around the kitchen so many times that sounds and stories are layered into a buzz of frequencies. But every so often I crack open a cookbook and a clear sound emerges. Today it was Coolio’s Gangster’s Paradise from the Dangerous Minds soundtrack:

As I walk through the valley of the shadow of death

‘Cause I’ve been blastin’ and laughin’ so long that

Even my momma thinks that my mind is gone

It’s not a typical song to layer on top of a handwritten recipe for apple crumble pie. But that’s the song that was playing on French radio all day, everyday, the year I lived in France. The year I made this pie nine times. The year I discovered that invites are given to fellow foreign students, often only for the pie.

Before leaving for France, I worked as a part time medical receptionist while at university. Between checking people in, filing test results and sterilizing speculums in the autoclave, I read recipes from food magazines scattered on the staff room table. My colleagues loved to cook. I was twenty-one; they were in their forties. I could make great chocolate chip cookies, but that’s about it. They had children of various ages and lunch containers filled with good leftovers. I didn’t own my own cookbooks. They discussed recipes like characters in a novel. I knew I would need their wisdom. I copied out recipes in my notebook, guided by folded magazine pages and eavesdropped passion, and brought them with me to France.

And that is how I found myself hunched over a wooden table in a rented kitchen, rolling pastry with a wine bottle, listening to Gangster’s Paradise on French radio. Again, and again. But I didn’t mind. It may have been too hot outside for a Canadian pie, and I was no Michelle Pfeiffer, but peeling autumn apples from the market and tossing them with sugar and cinnamon felt right. Rolling out pastry between wax paper made it easier, even when your rolling pin is a bottle of Beaujolais. And patting a crumble topping over the pie pastry not only covered pastry patches, it also satisfied the craving for two fall classics in one go – crumble and pie.

We ate this pie last weekend, on a rainy warm night, while listening to Exile, Taylor Swift’s collaboration with Bon Iver. The next day I topped a leftover slice with aged cheddar and sat in the sun with Andrew Huberman in my ears, explaining the power of dopamine. 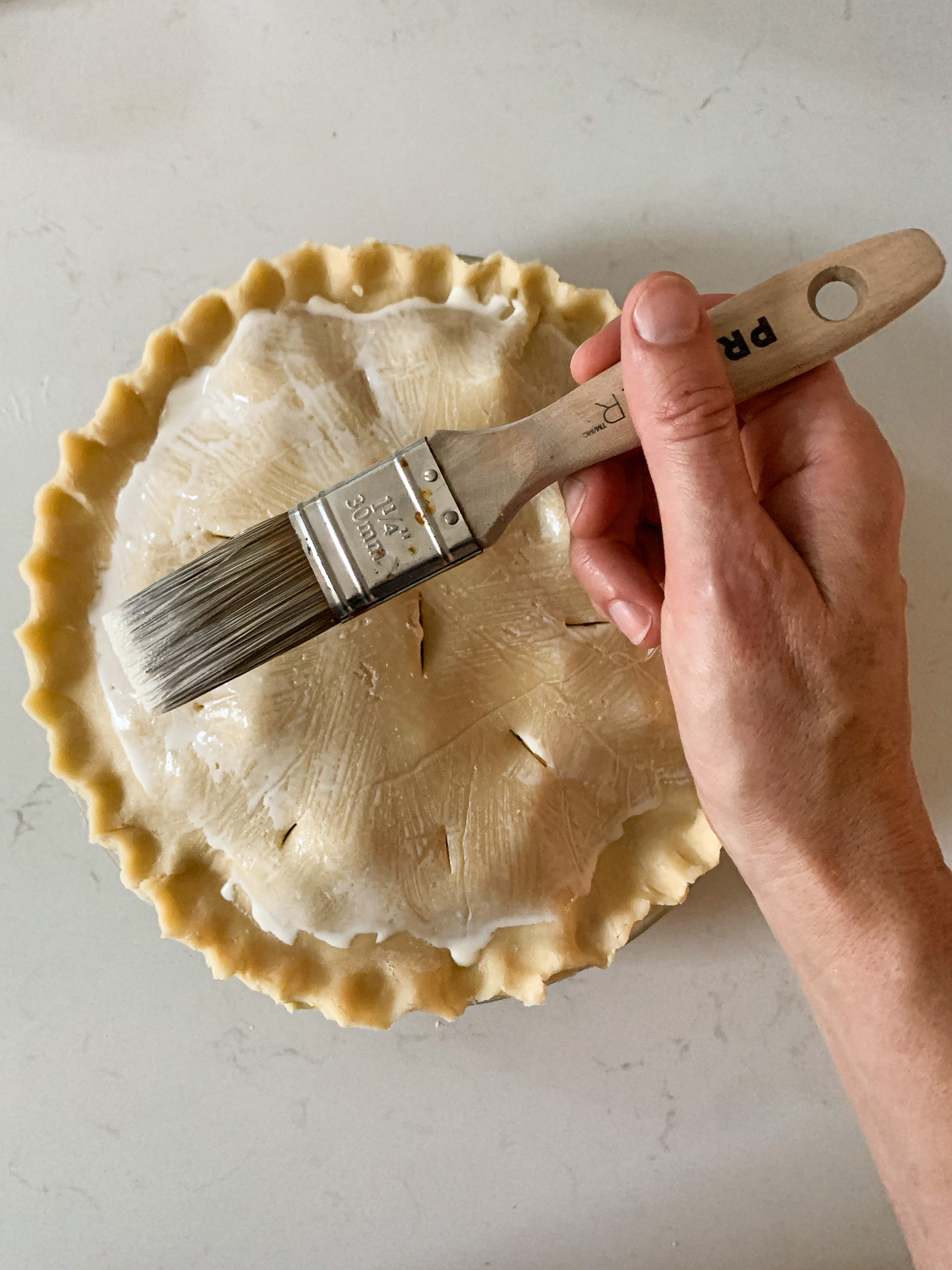 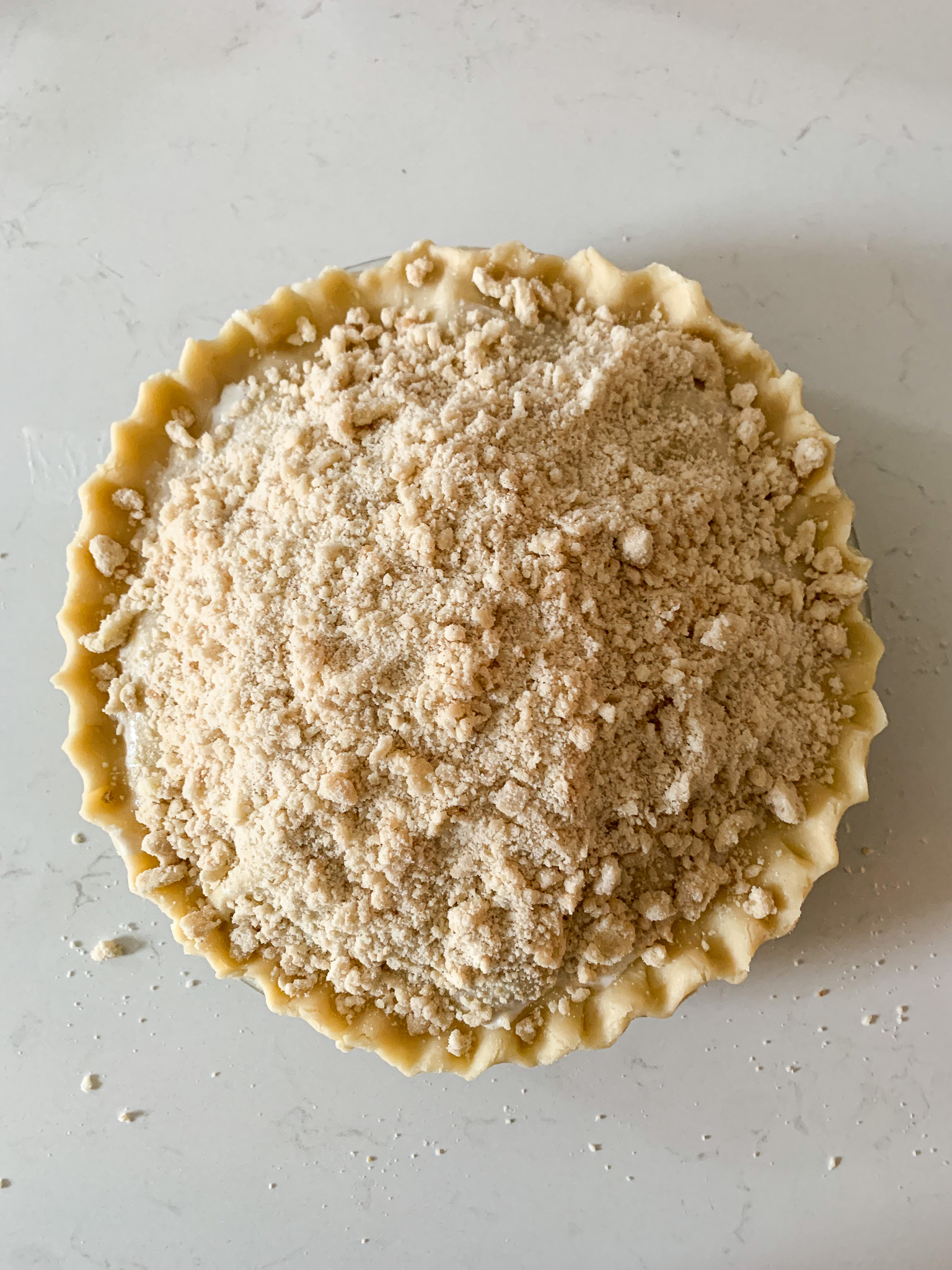 This recipe is a two for one – it’s a traditional apple pie with a pastry lid covered with a crumbly, streusel-like topping. Adapted, most likely, from Canadian Living Magazine – a favourite in the staff room circa 1995. I’ve made a few changes over the years, but it remains a simple, texturally divine, really good pie.

For the crumble topping:

1 tablespoon of milk, to brush on the pastry

The sliced cheddar cheese to serve, as we do around here, is optional. Without it, some say, is like a ‘kiss without a squeeze.’

To make the pastry, sift together 2 cups of flour, sugar and salt in a large bowl. Add cubes of butter and using your fingers, rub butter with the flour, adding water when things get dry, until the mixture resembles coarse crumbs. Gather mixture together and turn onto a floured surface and knead pastry into a ball. Cut into two pieces, leaving one ball slightly larger than the other. Reshape the balls and wrap the larger ball in plastic wrap and place in the fridge to chill. Roll out the smaller ball between wax (or parchment) paper, invert and press into an 11 inch pie plate, trimming off any overhanging bits of pastry.

Combine peeled and chopped apples in a bowl with brown sugar and cinnamon. Pile them on top of the pastry-lined pie plate, mounding higher in the middle. Remove larger ball from the fridge and roll between wax paper. (If pastry is really cold and firm coming out of the fridge, whack it a few times with the rolling pin to flatten before rolling. This doesn’t work as well with a wine bottle…). Drape over apples and seal edges together, again trimming away any excess pastry.

Combine ingredients for the crumble topping in a large bowl and mix together with your fingers until combined but still coarse. Brush pastry top with milk and using a sharp knife, make 8 slices in the pastry. Scoop up crumble topping with your hands and pat onto the surface of the pastry.

Bake pie for 30 minutes, then reduce heat to 350F, loosely cover pie with aluminum foil, and continue to bake for 40 minutes more. Remove pie from oven and leave to cool a little. I remember the original recipe (that called for shortening, not butter) also suggested drizzling the baked pie with a little icing sugar mixed with water. I’ve never gone this far. But tell me if you do.