By Lindsay Cameron WilsonDecember 1, 2021No Comments 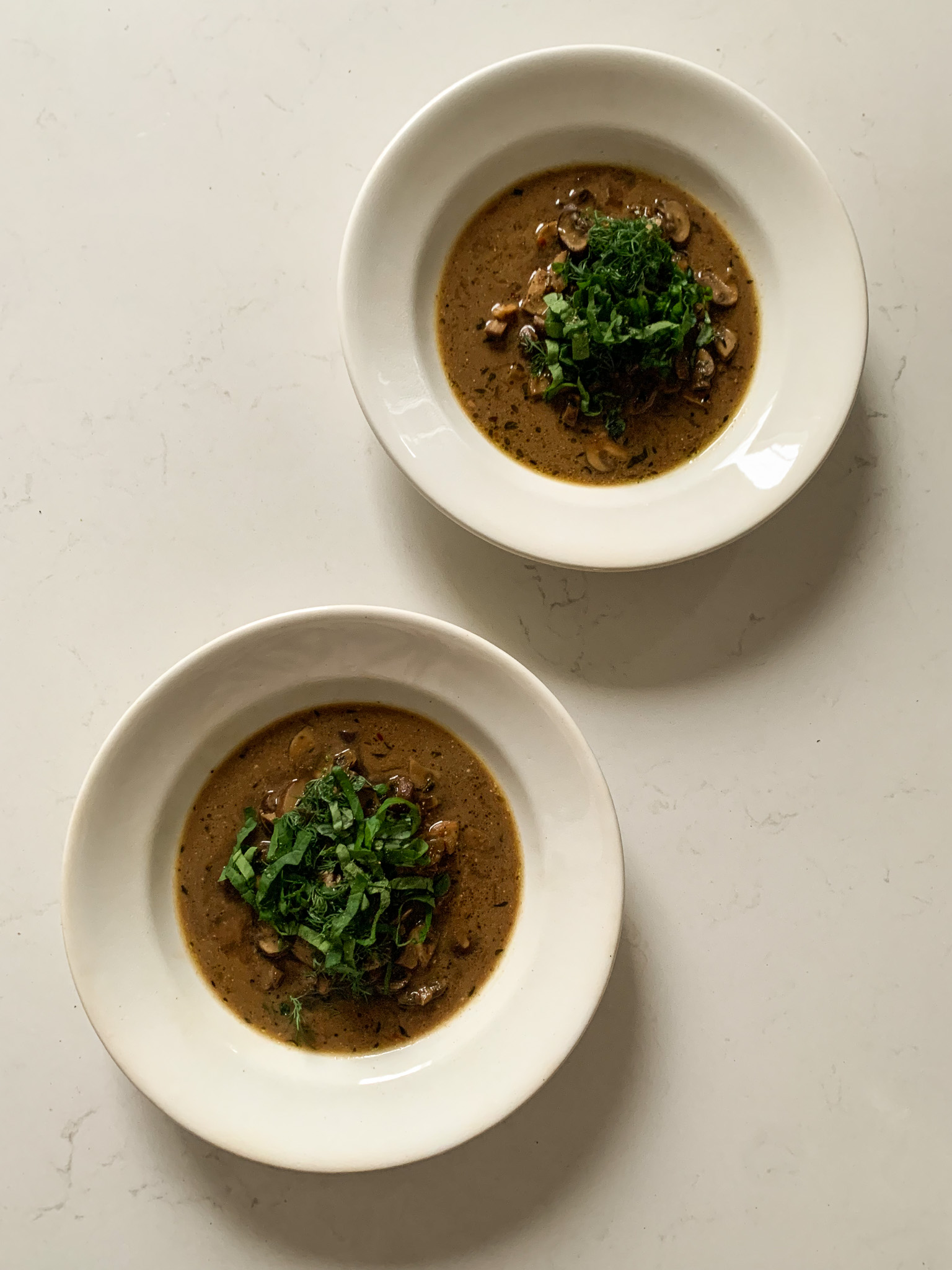 Earlier this week I invited my neighbour Tracy over for a bowl of mushroom soup. All three of my boys loathe the earthy, squishiness of mushrooms, so I bring them out in full force when they’re not around. Tracy sat on a stool chatting with me, as I melted butter in a saucepan with chopped onion, garlic, and a pile of fresh thyme. I added chopped mushrooms, let them sizzle away for a bit, then lit a candle, like my Aunt Sandra does, to brighten up the damp grey outside. A splash of white wine went in next, followed by a few cups of salty, miso-y stock, then I stirred it all together while Tracy filled me in on her life since I had seen her last. I told her about Nick.

My sister and I drove our friend Nick, a university student I’ve been mentoring since the fall of 2018, to Prince Edward Island for a very big interview. We brought road coffees, smoothies, and chocolate chip cookies. Nick made a playlist. He told us about life on campus these days. Alumni fundraisers. A vigil for a fellow student. Trauma. Togetherness. We talked about municipal politics, missing tennis players in China, perfect sweaters for interviews and Nick’s upbringing. We talked about love, about life. And when Nick remembered to be nervous, he’d roll his 6’2” frame into a tight ball, right there in the passenger seat.

I was matched up with Nick through my involvement in the Loran Scholars foundation. The foundation grants scholarships to undergraduate students with strong leadership skills, strength of character, an interest in public service and stellar grades. I was not this student. But now, after over 10 years volunteering, I can spot them, bright and hopeful, from far away.

Some students in the programme are looking for mentors who work in a field they are considering. Some want to network. Nick wanted a mother.

“I don’t mean to pigeon-hole you, Lindsay,” said the coordinator on the other end of the phone. “It’s just that, I think you’re the one.” It’s true. I love nothing more than marooning myself at our kitchen island with a friend while I prep a meal and we chat about life. We were a match.

Nick quickly folded into the community. After a few years in residence he moved into my sister’s bachelor flat around the corner. He became friends with our Aunt Sandra who lives upstairs. He fell in love with political science and philosophy, became President of the Student Union, and began a covert part-time job within Canadian intelligence. He tutored my kids, joined in on family meals, and cheered on my writing projects. He got to know the joys of old houses, living with mice and furnaces that explode. He rolled with it. The mentor/mentee scale would tip back and forth, depending on need, depending on the day.

I haven’t always flowed so comfortably in my neighbourhood. We lived in a ground floor flat in London where neighbours would scurry down the shared hallway before anyone had the chance to strike up a conversation. Acknowledging each other was a reminder that we were squished together in this city; privacy was something we couldn’t afford. This meant no sharing cups of sugar, no watering of each other’s plants, and certainly no Nicks teaching Aunt Sandra a few yoga stretches in the kitchen.

Tracy and I were sitting down with steaming bowls of soup by the time I reached the point in the story where we had picked Nick up from his interviews in Charlottetown and had driven three and a half angsty hours back to Halifax. Eight students were interviewed, two would be chosen, and the judges, he said, would call between five and six pm.

Tracy is an Olympic rower who didn’t discover the sport until she enrolled in a learn to row programme in university at the age of 25. She’s come from behind in a double scull to win a world championship, and has a bronze medal from Beijing. She loves a good ‘overcoming adversity with grit, tenacity and determination’ story.

At 5:11 pm we were crossing the bridge into Halifax. The traffic was intense for a Saturday; that night a holiday parade would be weaving from the bridge straight through our neighbourhood. Nick was staring at his phone like it was the ring, and he, an exhausted, overwhelmed Froto Baggins. I told him to put it down. I turned off the music and we inched across the bridge in silence. At 5:16 pm his phone rang. Nick answered, his voice a few octaves higher than normal. “Congratulations Nick on becoming a Rhodes Scholar,” said a voice through the phone. Nick managed to thank the judges through his tears. I almost crashed into the car in front of me. Lee whooped from her seat. And when the call was over, Nick, who had folded his body into the nervous position, unfurled and kicked the air. It was a ‘Bridget Jones in her pj’s listening to All By Myself’ moment, all limbs, passion and release, just as we crossed over the bridge.

I topped up Tracy’s bowl with more soup and garnished it with the soft herbs she had brought from her garden. Tracy was still clapping for Nick, and laughing through her tears. I air-kicked, Bridget-style, before I sat back down on my stool. 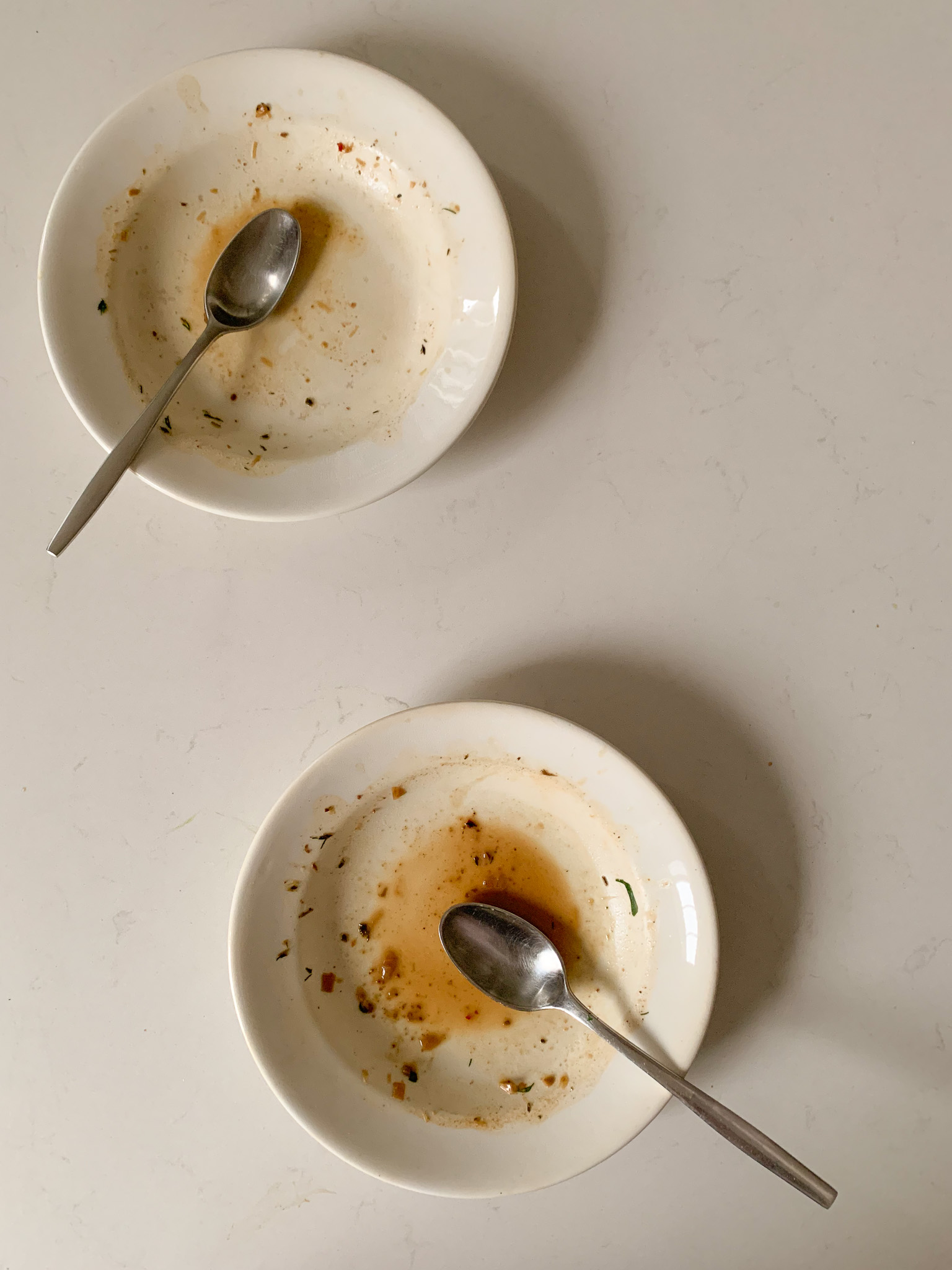 Serves 2 with enough for seconds

In a saucepan, melt butter with olive oil over low heat (the oil keeps the butter from burning). Add onion, garlic and thyme and leave over low heat, stirring occasionally, until onions have softened a little, about 5 minutes. Add a good pinch of salt (not too much, salty miso is going in later) and some red chili flakes. Whisk miso paste with boiling water, and set aside for a minute. Add mushrooms to the pan, turn up the heat to let them sizzle a bit, then add the wine. Stir well as it sizzles, then add the miso liquid. Let it simmer away, for 5 minutes or so, then taste, adding more salt or some cracked pepper if you’d like.

Just before serving, whisk in a big tablespoon of crème fraîche and stir until it has melted into the soup. Serve, and top with soft greens if you have them, or a dollop of more crème fraîche, or both.