When Your Salt Tells a Story

By Lindsay Cameron WilsonSeptember 21, 2016No Comments 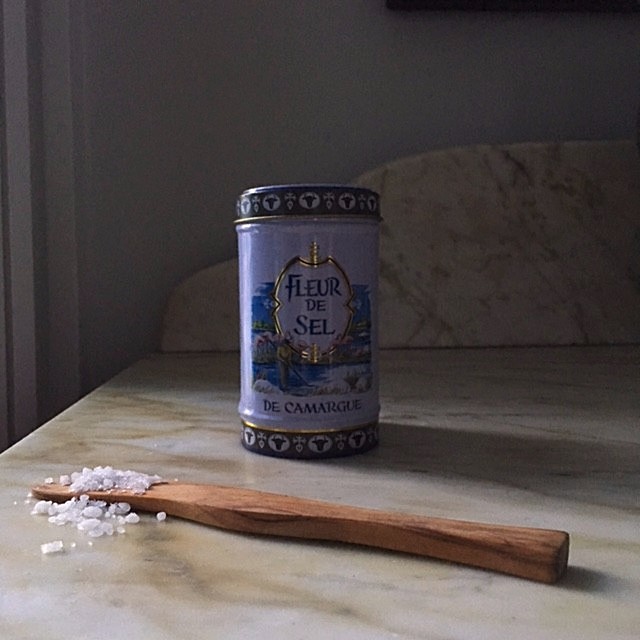 Remember the beginning of the 1973 animated version of Robin Hood? The one that begins with Rooster’s voice narrating the story as the pages of an old book slowly turn? Then, an illustration of Rooster cruising along strumming his mandolin suddenly begins to move. We dive into the book with him, and off we go with his toothy whistle pulling us along.

The notion of a still life, a fixed object that comes to life, happens in my kitchen all the time. I’ll reach for an ingredient, peel it, crack it, open it, and a story flows out.

Take my salt for example. It’s a special, flaky, textured salt I use to sprinkle onto food as if they are bits of semi-precious, edible stones. The salt is called Fleur de Sel de Camargue, and as the name suggests, it comes from France. The Camargue is a large wetland stretching along the Mediterranean, just south of Arles. Part of the region is a UNESCO site, a protected bird sanctuary of sorts. Thousands of birds, from flamingos to egrets to herons, migrate there each year. Then there are the horses that run wild on the beaches. And of course there’s the shallow, salty mediterranean water lapping up into the wetlands, perfect for harvesting sea salt. Some say that each hand raked crystal from the Camargue has the aroma of violets, while each tin is sealed and signed by the salt raker who harvested it.

The salt is packed in a blue and white tin. There’s an image on the front of the ocean and pink flamingos, tip-toeing through sea grass. My friend Cécile gave it to me when she and her family came to visit last year. Cécile was my roommate many years ago when I studied French in Aix en Provence.
I visited the Camargue that year, with a carload of friends and my then boyfriend, now husband, James. Cécile and I have been friends ever since that year in Aix. She’s the kind of friend who arrives with kitchen design books and pretty tins of salt for me. Stories all the way from France.

Given this history, this backstory, myriad stories could flow out of that tin. But for me, when I crack it open, it’s not the flamingos or the salty marshes that come to mind. All I see is James, stop, dropping and rolling off a horse…

As good tourists, we paid to go for a beachy horseback ride when we visited the Camargue. A tanned older man, weathered like the horses, whistled and a few horses appeared out of the sea grass. He tossed a few saddles on their backs, despite their stomps and neighs, and we hoisted ourselves up and on. Most of us had ridden before, and our horses seemed to know and respect that. James had never ridden before, and his horse, well it was almost as if he started laughing, in horse French.

The horses took off, galloping instantly along the sand. But James’ horse wouldn’t commit. He was stuck in an awkward trot-canter, and James was wildly bumping along on, flapping his arms like a chicken. Or Rooster from Robin Hood.

Eventually his horse took a sharp turn. James went flying off, but tumbled along the sand like a stunt man. He says the fall was anticipated, hence the graceful landing.

That’s what I see as I rub these violet-infused salt crystals over my pork roast. A younger life, adventure, belly laughs, and wild horses, laughing in French.