What’s behind a photo?

By Lindsay Cameron WilsonFebruary 7, 2020No Comments 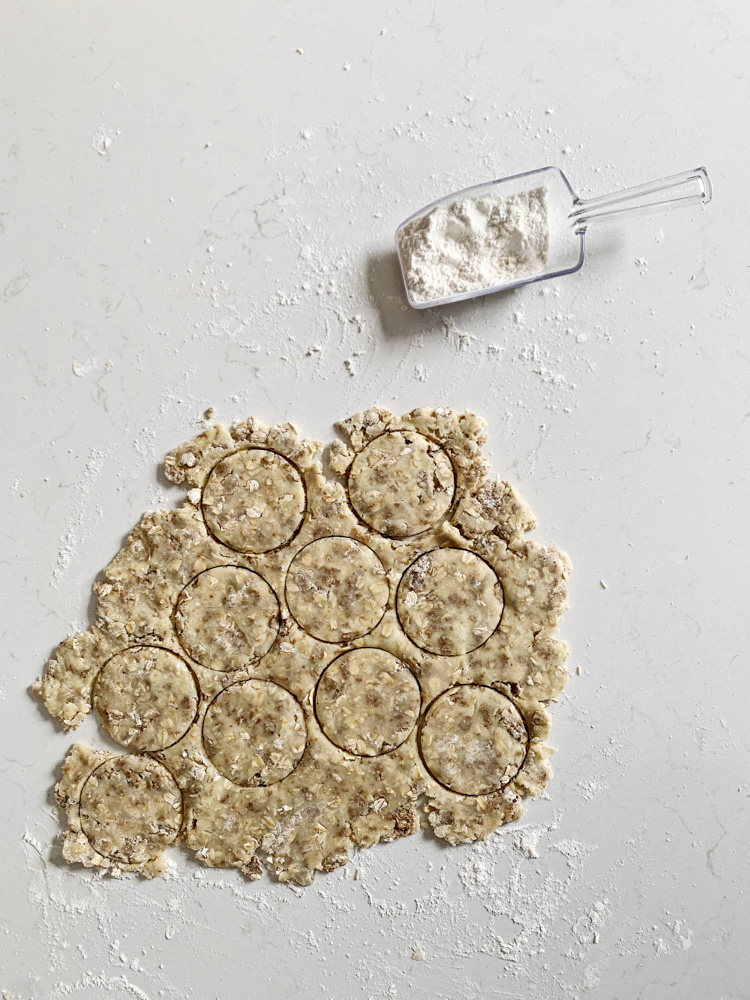 I took this picture last week. There was a potluck at the school to celebrate world language and cultural day, and my middle son wanted to represent his 25% Scottish heritage. He has a kilt, inherited from his late godfather, and couldn’t wait to wear it. But what to bring? Haggis wouldn’t fly. Steel cut oats would get mushy. So we settled on oatcakes.

The recipe comes from my aunt, who got it from her mother in law, who got it from an Inn in Cape Breton. They’re made with oats, flour and sugar, the usual suspects. But this recipe has something different – Bran Flakes – for crunch, sweetness and texture. A hybrid, let’s say, just like us Nova Scotians.

He combined the dry ingredients while I measured the butter. He mixed everything until almost smooth- rugged batter was the look we were going for. We put the dough in the fridge and the next day, when the kitchen was quiet and the counter was free for rolling, I baked. And, I took this picture. I listened to a podcast with my EarPods in. I walked to the sink to wash my hands.  My left EarPod fell straight down the drain, like a diver without a splash. I crawled under the sink and tried to open the catch with my hands. I couldn’t. I found a vice grip in the basement and twisted until I wore the plastic ridges off the catch. Righty tighy, lefty loosey. I was unsuccessful. Later that night my husband gave it a go, until he realized the catch had been glued on. With sweat on his brow, he called a plumber. We needed a new drain anyway, one that would catch an EarPod before it hit the standing water several feet below.

That night I began reading The Overstory by Richard Powers. I’m now a little ways in; my dent in the book matches the thickness of a wafer-thin oatcake. But already I’ve witnessed the growth of a towering chestnut through the lens of an immigrant couple as they marry in Brooklyn then travel to Iowa, where they begin farming, growing their family and planting six precious chestnut trees carried from New York. Their east coast chestnuts are rare in Iowa. Their success is a gamble. Two died in winter. One died of draught. Another by lightening. The fifth died when it was stripped of its leaves by the farmer’s son who used the leaves for paper money. But the sixth, it flourished.

Later a deadly blight arrives from Asia “in the wood of Chinese chestnuts destined for fancy gardens” and wipes out chestnuts up and down the Eastern seaboard. But this chestnut, on a hill faraway in Iowa, survives.

Every month the farmer takes a picture of his precious tree to document its growth. When he dies his son does the same, as does his son’s son. They leave behind over 1,000 photos of this now majestic tree, reaching tall, despite it all. I think of the red oak that stands along a tributary of the Shubenacadie River. The tree is visible from Highway 102, a fleeting view from the car window. It’s famous. Drivers depend on it; that tree is a vision of calm.

Then I read on:

“The photos hide everything.”

The Depression that costs them two hundred acres.

The weddings, christenings and graduations.

The deaths in the South Pacific.

“Everything a human might call ‘the story’ happens outside the photos’ frame. Inside the frame, through hundreds of revolving seasons, there is only that solo tree, its fissured bark spiraling upward into early middle age, growing at the speed of wood.”

Oatcakes and a flour scooper is a serene scene. It’s not hiding one hundred years of fire, disease and war, but it doesn’t tell the story of a small plumbing crisis. There’s always a story that a photo does not to tell.

PS – my left EarPod survived a night in the plumbing, and those oatcakes slid in nicely on the dessert table amongst the baklava, red bean dumplings and Nanaimo bars. And, Charlie wore his kilt.

Add baking soda to boiling water and let stand until cool. Sift together flour, baking powder and salt. Stir in the Bran Flakes, sugar and rolled oats. Add butter and combine until mixture is crumbly, or rugged as Charlie calls it. Add cooled water with soda and combine until water is incorporated. Form into a ball and roll out thinly onto a lightly floured surface. This can be done in stages depending on counter space. Cut as you wish – circles, squares, whatever you’d like. Bake on cookie sheets until golden brown – timing will depend on thickness of oatcakes. Test at 8 minutes…