By Lindsay Cameron WilsonJanuary 25, 2017No Comments 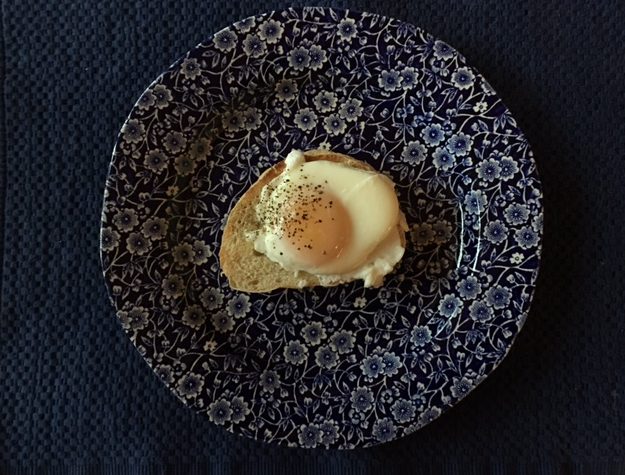 Last week I introduced my (‘I’ve never baked before’) father as a bread maker. Guess what? He has also added poached eggs to his repertoire.

And he can make them for a crowd, ‘up to five at a time’.

My Dad says he was inspired by Julia Child’s ‘perfect poached egg’. Julia likes to give eggs a 10 second boil before poaching them. But before she submerges them into the water, she pokes a hole in the large end of the eggs with a little push pin to release the air. This keeps the shell from cracking during the shell-on boiling phase. Then she places the eggs in a metal sieve, submerges them into a frypan full of boiling water and counts in that fabulous voice of hers: one one thousand, two one thousand, three one thousand… you can watch her here.

Once you have perfected a skill at the highest level, you are free to pull back and cut corners. Free to make it your own.

That’s where my Dad is in his poaching journey. This is his version of the perfect poached egg:

He walks the fry pan over to the sink and fills it up with water, about 3/4 full. He places the pan on the heat – about medium high – and brings the water to a gentle boil. He pours a capful of vinegar into the water to “help with the coagulation of the whites. Any vinegar will work; balsamic or red wine vinegar might make your eggs pink.”

He gently cracks the eggs against the side of the pan then releases the insides into the water.

“I can’t do a one-handed crack like my son in-law Jamie. I used to crack the shell with a knife, but that took time and I wanted to get away from it. Then I went to the Chief’s* hunting camp in Old Barnes. I noticed he would approach the stove with egg in hand, and gently tap the egg on the side of the pan, once, twice, in a meditative fashion to get the rhythm. But the third tap, that was with authority. That’s the secret for getting guys like me into cooking – there has to be a reason, a method. It’s a pilgrimage.”

As the whites slowly transform from translucent to opaque, he slices his bread then puts the slices, two at a time, into the toaster. While the toast toasts, he loosens the eggs from the bottom of the pan with his red plastic, slotted spatula. It has to be that spatula.

“The vinegar does such a good job at coagulating the whites that sometimes stick to the bottom of the pan. We don’t want that.”

He also uses that spatula to flick water over the yokes as the eggs poach.

“Your aunt Sandra was here a little while ago. I offered her a poached egg. She agreed, as long as I didn’t serve it with that translucent ring around the yoke. I call that the ‘zone of pallucida’.** Scooping boiling water over the yoke as it cooks keeps this from happening.”

This isn’t an easy task. My aunt doesn’t want an undercooked ‘zone’, but my mother wants the yoke perfectly runny.”I should check my blood pressure before I serve the eggs.”

Just before serving, he butters the toast then sets the table – placemat, fork, knife, pepper and salt grinders. He stacks the plates beside the stove and places a piece of buttered toast on each plate. He carefully scoops up a poached egg, one at a time, with his red spatula. He suspends the spatula over the water for a second; the excess water runs between the slats. He places the egg onto the toast, then passes the plates to those seated at the table, where we’re expected to season our eggs according to taste. Jam is also on the table; you might need a little bit if there is toast remaining after the egg is gone.

What is the perfect egg?

It’s sitting around a table, a big cup of coffee in your hands, knowing there is more in the pot on the counter. Someone is making eggs for you. This person is new to the joy of hospitality, new to the thrill of serving another and receiving thanks for it. The egg might be wobbly or a little hard, or even a little clear around the yoke. But you don’t care. When multiple eggs are cooked at once and removed from the pan one at a time, each egg will cooked to different degrees of doneness. Swap plates with the person beside you when no one is looking. It’s the moment you’re after, not the egg itself.

*The Chief is Ross Doyle, an old friend and mentor in all things manly.

**The zona pellucida (plural zonae pellucidae, also egg coat or pellucid zone) is a glycoprotein layer surrounding the plasma membrane or mammalian oocytes. It is a vital constitutive part of the oocyte.
Share Tweet Share Pin