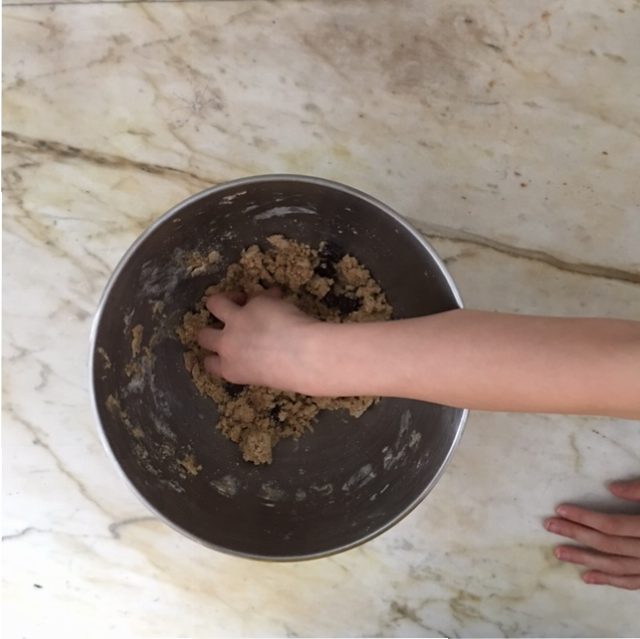 I spent most of my childhood sneaking around.

My sneaking memories begin with cookie dough. We were living in Jackson, Mississippi at the time. I was four. I remember our ’70’s kitchen – lots of brown, a garburator and a lazy susan in the corner that my little sister Lee would crawl around in, playing with Tupperware. There were sliding glass doors off the kitchen opening onto a stone patio. The air was sticky. Lizards lived in the garden.

My mother made cookies in the afternoon after nap time, probably to fill that long late-afternoon pre-dinner stretch, as I also did when my boys were smaller. These days blur together in my memory, except for one particular afternoon. My mother had left the kitchen, so I stood high on my tippy toes, so I could grab a fist-full of dough. But as I reached higher, for maximum grab, I heard her coming. I took my fist-full and ran to my bedroom, past my sister Sally playing with her doll on the bed, and straight into our closet. I pulled the doors shut. Horizontal slats of light shone across my body that moved as I stuffed that fist-full of dough in my mouth. My heart was beating, and I was smiling.

I later went on to sneak squares of baking chocolate from my mother’s baking cupboard. I snuck cookies too hot to eat, still warming on the rack. I ran my finger along the edge of frosted cakes. I snuck my sister’s clothes. Her bicycle. Her toothbrush. Change from the top of my father’s dresser. Cream from my mother’s Clinique bottles.

As I grew older the sneaking continued. But in an effort to keep this space G-rated, I’ll stop here. I will say that the adrenaline rush of ‘hiding in the closet with a fist-full of dough’ (ie. sneaking out of my bedroom window as fifteen year old most summer nights) was soon over shadowed by an eerie sense of shame. I balanced between the desire to live on the edge, and a fear of getting in trouble. Of being in trouble.

My aunt Sandra sees it differently. The other night, around the dinner table, she shared the best sneaky story. It was a celebration of pre-teen sneaking at its best. We all celebrated it. We revelled it in.

It was a summer’s day in 1961. Sandra and her two best friends decided to take the bus into Halifax to catch a matinee- Sex Kittens Go To College. They put on matching outfits – white blouses and leopard petal pushers – and waited on the Bedford Highway for the bus to arrive. They were twelve.

Shortly after, her father, my grandfather, pulled up beside the bus stop and offered to give them a ride. Oh no, they cried, they already had bus tickets, they were going to a movie in the city. But he insisted. How were they going to pull off going to Sex Kittens Go To College now?

The four of them drove quietly down the Bedford Highway and along Robie Street. At the intersection with Quinpool Road they had a choice – they could hop out of the car and take a left towards the Garrick Theatre on Sackville Street where they’d undoubtedly get caught trying to get into Sex Kittens Go To College, or they could take a right and head down to the Oxford Theatre where The Ten Commandments was playing. Sandra thought they could pull off both. They hoped out at the corner, thanked him profusely, waved goodbye, and ran-walked down Quinpool towards the Oxford theatre, until the imaginary camera Sandra felt in the back of her head could no longer see her father’s car. Then they spun on their heels and backtracked, cutting through the Commons to Sackville Street towards their destination. They bought their tickets, breathlessly slid into their seats and watched what Sandra remembers as a very boring, very grey, Sex Kittens Go To College.

Later that evening Sandra was picked up at her friend’s house by her father. He had never picked her up before. He had watched the girls walk-run in one direction, then walk-run in the other. She had lied, and he was furious. And, his daughters were good girls. They DID NOT watch movies like Sex Kittens Go to College, regardless of how boring and grey it turned out to be.

I still sneak cookie dough, even though I’m an adult, and I’m in my own kitchen. So does my youngest son. But he’s far less sneaky than I am. He just takes it. What’s the fun in that?

PS If you’re going to sneak cookie dough, I highly recommend Tara O’Brady’s chocolate chip cookie recipe. She melts the butter before whipping it with white and brown sugar, hand chops the chocolate and finishes off the dough with a pinch of granular sea salt before baking. Definitely worth sneaking.