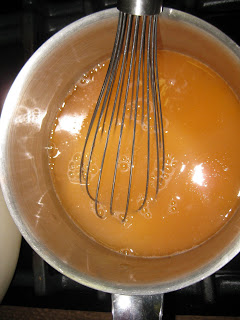 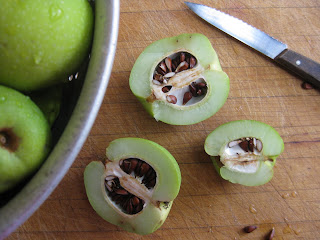 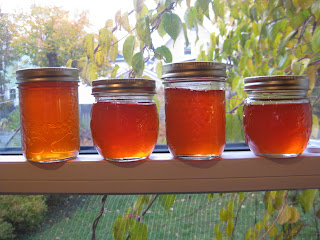 So, in the end, the aforementioned jelly actually turned from green to rose-quartz pink to amber to rusty red. As the colour changed, so did the flavour. In its raw, green state, quince are eye-wateringly sour. Once clear and red, the jelly is sweet with a tart top note. The four cups of sugar helps.
The recipe came from Joy of Cooking. According to Joy, quince is packed with pectin so doesn’t need certo. Just quince, sugar and water.
Chop fruit in half and place in a heavy bottomed stock pot. Don’t worry about amounts – the formula for this jelly is based on the amount of liquid you have after simmering and straining. Add enough water just to cover fruit, but not enough so the fruit floats. Bring to the boil then simmer gently till soft, about 1.5 hours.
This is where things get creative. Fill a jelly bag, or failing that, line a big bowl with a double layer of cheesecloth or, in my case, my baby’s muslin receiving blanket. A clean one. Spoon the mashed fruit into the bag, then tie the corners around a broom. I put the bowl in the sink, then lifted the broom horizontally so the bag was dangling above the bowl, catching the juice. I supported the broom with upside down shopping buckets and cookbooks. I can’t believe I forgot to take a picture.
3-4 hours later I had 6 cups of pinkish, opaque juice. The pulp in the bag went into the green bin.

Joy suggests making jelly with just 4 cups of juice at a time, approximately 3/4cup -1 cup sugar per cup of quince juice. You can also freeze the juice and make jelly another time.

Put the juice in a large saucepan and bring to the boil with the sugar, whisking constantly at first to dissolve the sugar. Chill a little plate in the freezer. Skim off any white scum as it forms. After a while – 20 minutes? – drip some juice onto the chilled plate. After a minute, push the puddle of juice with your finger. If it wrinkles as it’s pushed along, it’s ready. Look elsewhere for more serious instructions…..
Pour mixture into sterilized jars and cover as you like – wax or with lids and rings. I used the latter (jars and rings can be sterilized and re-used, but lids can only be used once). I boiled the sealed jars in a pasta pot, lifted them out with tongs and let them cool. As I washed the dishes I heard the lids ‘pop’, one by one. A good sign the seal worked.
Et Voila!
Share Tweet Share Pin