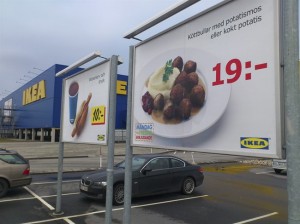 My plastic green desk chair came from a Halifax yard sale. It was made in an Ikea factory in the 1980’s. Who knows where it’s been inbetween. I bought the chair because I liked it and it was was cheap. Lately my green chair has made me think about the European horse meat crisis. The two seem disparate, but processed food and processed furniture are actually one in the same. We don’t know what’s in it or where it’s been, but we buy it because we like it and it’s cheap.

Humans are attracted to convenience, even when it isn’t good for us. Let’s take Ikea (since I’m sitting on my green chair) for example. When my husband and I first moved to London in 2001, we had nothing but my student debt and a table and chairs. We needed everything, ASAP, and affordable. My cousin warned us that the IKEA of London was ‘Swedish for divorce’. But we went anyway. What choice did we have?

She was right. Without a car (as are most people in London in the ‘desperate for a bed, hangers, towels, sofa, chair, drying rack, ironing board and tea lights’ category) the journey to Ikea involves 3 buses and a tube transfer that spits you out beside a highway in industrial Tottenham. The journey was one hour and forty-five minutes. At that point I had to pee. We could see the yellow IKEA sign – way off in the distance –  from the doors of the tube station, but were we supposed to scissor-kick the guard rail and dash across the underpass to get there? I couldn’t wait. I squatted amoungst the ‘rubbish’ beside the road and smiled as the commuters whizzed by. When we eventually arrived, dusty, hungry and disheveled, we were starving. The cafeteria called to us like a mirage in the dessert. We grabbed a tray and piled on the Swedish meatballs. They seemed delicious. But by the time we had been through kitchens, living rooms, storage and picture frames, the salty meatballs had sucked every ounce of hydration from our bodies. Our heads ached. We started fighting.

At the check out we learned that our furniture would be delivered one weekday, next week, sometime between 8am and 10pm. One of us would have to take the day off work. When the furniture eventually arrived, the instructions were crypitc. My husband was swearing. Screws rolled randomly across the floor. I stepped on one. There was blood on the new Ikea carpet. Our dresser was in pieces.

Needless to say I was totally grossed out when, years later, I read that horse meat was discovered in Ikea meatballs. The European horse meat crisis seemed far away when it began in January of 2013 with the discovery of horse meat in Irish economy (ie. 47% beef) burgers. Since then horse meat has been found in frozen ‘beef’ products all over Europe, from posh grocery stores to the no-frills equivalents. I shopped at most of those grocery stores. The story was suddenly personal. Thoughts of mislabelled conveniences began swirling in my head. It was all so shocking, but apparently it’s nothing new. According to the Guardian, this crisis is only lifting the lid on a “hidden, unsavoury world, in which animals are transported vast distances across borders for slaughter, before being stripped down to constituent parts to be shipped back again in blocks of frozen offcuts that may be stored for months on end, before being ground down to unrecognisable ingredients in our everyday meals”.

Then came BBC radio 4’s investigation. They follow the journey travelled of a frozen dinner produced by the Swedish company Findus. The Findus meal process goes something like this:  A French company makes the meal. They source their meat from a factory in Luxembourg. The guys in Luxembourg use an agent in Cyprus, who uses an agent in Holland, to source meat from an abattoir in Romania. The Romanians insist their meat is properly labelled at the abattoir, but labels wear away when lower costs and plenty of travel is involved.

So. We want cheap food, then we get mad when we’re deceived. But if an Irish economy beef burger is said to contain 47% beef, what do we expect the other 53% to be? We know it’s bad for us, but we buy it anyway, because we like it, and it’s cheap.

Except for my green chair. It’s perfect really. Ikea may be Swedish for divorce, but sometimes their products are real gems. The secret is to by-pass the industrial shopping/eating process and stick to yard sales. I promise it will be head-ache and horse meat free.