By Lindsay Cameron WilsonMarch 4, 2020No Comments 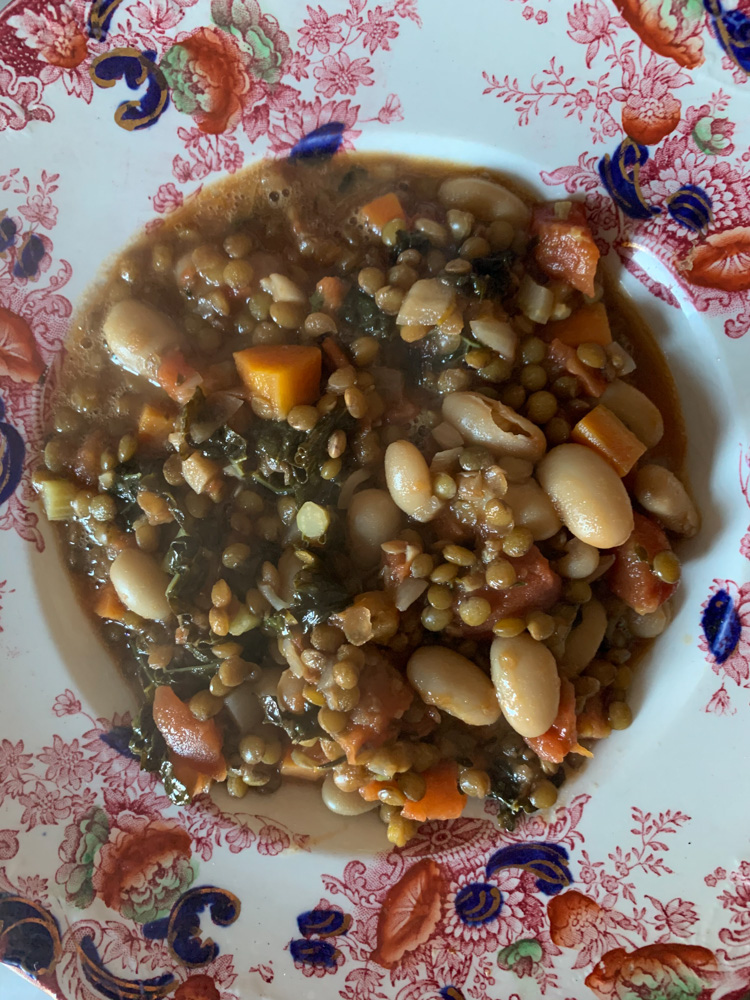 Hey Google: he’s gluten free and vegan. What should I make for dinner?

I cook gluten free and vegan often, unintentionally. But when my son invited a friend over last weekend who only eats that way, I was suddenly launching through space with images of spaghetti bolognese, pepperoni pizza and egg-in-the-hole passing by at lightening speed. All I could do was reach out, grab the counter, and bellow for google. And when I got a grip, I opened my fridge and made lentil soup. I knew what to do, I just needed a nudge.

My recipe is a version of my cousin Betsy’s, who used to run a cooking school out of her basement kitchen. Her version calls for pancetta and parmesan, but it’s just fine without the meat and cheese. Especially because it begins with a long, slow soffritto – the trio of celery, carrots and onion cooked slowly in oil that act as the flavour foundation for soups, stews and sauces. I had a leek in the vegetable drawer, so I threw that in too. As the vegetables softened, I rinsed Puy lentils under the tap. These lentils are the prettiest pale green with tiny flecks of black. I ran my fingers through them under the water. They felt like tiny pebbles at my cottage, where the sand meets the waves. I added garlic to the pot, and some cherry tomatoes I had sitting on the counter. I needed their sweetness. I rubbed dried thyme between my fingers and let the tiny needles fall into the pan. In went the drained lentils, more tomatoes, stock, a can of beans (not in the original recipe but I was going for maximum goodness), more salt, pepper, and some dried oregano. I stirred it all, brought it to a boil, then turned it down to a gentle simmer and walked away, leaving the lentils to cook.

Cooking can be meditative. Touch your ingredients, soak in their smell, stir slowly and breathe. This is what I do, at least, when chaos is flying at me in the form of spaghetti bolognese. We all know it’s not the meat and pasta that’s the problem. It’s the swirl of life. The spinning. The questioning. But when you take a second to grab the counter, breathe and ask for help, life slows down. Simple ingredients are given time to meld together. Flavours sing, and life tastes better.

Heat olive oil in a large soup pot over medium low heat. Add onion, leek, carrots, and celery and leave to soften, stirring occasionally, for about 10 minutes. Add garlic, a good pinch of salt, and cherry tomatoes, if using. Sauté a few minutes more. Add lentils and give everything a good stir. Pour in the tomatoes and their juice, salt, pepper, oregano, beans and stock. Give everything a good stir, partially cover and cook slowly until lentils are tender. Add more water (or stock) if necessary. A few minutes before serving, stir in the kale and simmer until wilted.

Taste before serving, adding more salt and pepper if you’d like. Serve soup topped with a swirl of olive oil.