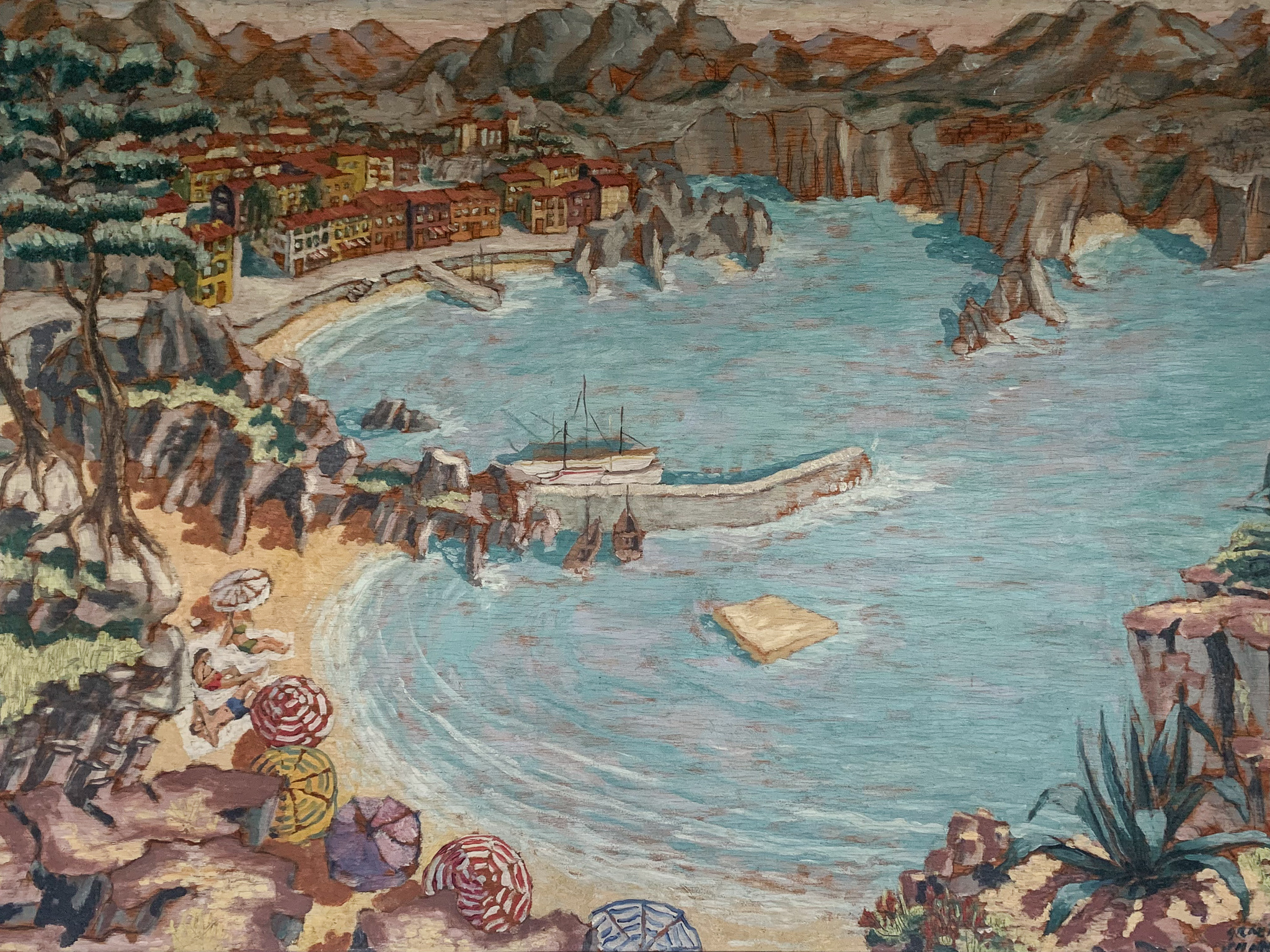 Whenever I’m visiting my mother-in-law Rose, the morning ritual is the same – I sit just off the kitchen, sip coffee and stare at the painting hanging above the sofa.

It’s a beach scene, oil on board, of the blue Mediterranean, steep cliffs, striped parasols, women in bikinis (one topless.) There’s an old port, a sailboat, cacti and palms, and floating out to sea is a curious pale yellow raft, larger than it should be.

Rose called it the ‘smoked haddock raft’ when she was a little. Her mother used to poach smoked haddock in milk with onions and that raft was exactly the same colour as both the milk and the haddock.

The painting originally hung in Rose’s father Charles’ residence room at Cambridge, left behind by the artist and previous occupant of the room, Graeme Shankland. Charles loved it so much he sought out Shankland, paid him £5 for the painting, and carried it with him through life.

When I first met Charles, the painting was hanging in his dining room. I remember being taken by the confidence of the French women in their bikinis, captured at a time when my grandmothers were wearing thick bathing suits that stretched from thigh to collarbone. And I remember being taken by Charles, an academic man who loved routine, yet lived his life alongside a painting of women in bikinis lounging on the French Riviera.

We arrived just after lunch, but the table was already set for dinner. Forks and knives from the metal artist in the neighbouring village, a seersucker tablecloth, a small stainless teapot off to the side, for later. Charles grew up in the south of England, in a home housed with chipped china and silver needing polishing. But he liked the post-war utilitarian objects that came out of the Industrial Midlands where he now lived. They were reliable. Reliability soothed him. Order soothed him. Growing up in a military family, years away at boarding school, university and working in the Air Ministry during the war had shaped him this way.

He led me past the dining room and into the guest bedroom across the hall. A grandfather clock struck one pm, then resumed its ticking. He placed my bag on one of the twin beds, then stepped towards me, brow furrowed, hands wringing at his chest.

“I would like to know if you are on some sort of birth control,” he whispered. “James is welcome to join you here in the guest room; alternatively he can sleep on my camp cot in the sitting room. It’s quite comfortable. Entirely up to you. But I would not like to be responsible for an impregnation during your visit.”

James and I were on a university study abroad program, en route to France for the school year. This was my first visit to meet ‘Grandpa.’ We had already settled into our French university town and found a place to stash our massive bags stuffed with clothes for the upcoming seasons. Classes didn’t begin for a few weeks so we travelled to this little village on the outskirts of Birmingham, beyond the Cadbury’s chocolate factory, with just carry-on bags and our passports.

The walls of the guest-room were covered in thick, textured wallpaper coated with what looked like royal icing. A pen and ink drawing of a woman in a 1950’s dress with a long cigarette between her manicured fingers hung above a narrow dresser. I sunk my feet into the shag carpet, wondering how this 83-year-old English man managed to ask me this question. Did prudishness only exist in the colonies?

I glanced down at the beds. Ernie and Bert had beds like these – wobbly and just narrow enough for a puppet. They were made up in pale pink nylon sheets. They looked flammable. I imagined an impregnation in this room – one foot on the floor to ground, or perhaps over on the shag carpet by the little sink, with the faint smell of pears soap to set the tone?

“I think James would be most comfortable on your camp cot in the sitting room,” I said, breaking the silence. He agreed with an exhale and left the room.

That afternoon Charles took us on his favourite walk down a little lane lined with ivy and stone, past the cottage with geese honking in the garden, up and over the rolling Lickey Hills, all the way to a small pub along a canal. As we drank our pints I asked him about Derry, his late wife. He said they were set up, blind, while he was at Cambridge, but it took days for their first date to happen.

“It was suggested we meet on a Friday, but Friday was my bath night at the boarding house where I lived. That wouldn’t work.”

It started to rain on our way home. Charles took cover under an old oak tree, leaning on his cane. Rogue drops of rain fell through the leaves onto his face. He dried his glasses with a handkerchief. We stood beside him until the rain subsided, then we carried on.

At 4:15 we sat in the sitting room with a glass of sherry, as Charles said he did everyday, in his mid-century armchair in front of the window, James and I on the low, plush sofa beside the electric fireplace. Pampas grass filled a vase in the corner of the room stretching up behind the television. I liked the sweetness of the sherry, the tiny glass, the ritual.

When we were finished, I took the glasses into the kitchen and rinsed them in the sink. Beside the sink was a small piece of paper, torn carefully from a notepad:

At 6:15 we settled into the sitting room for an evening of television. Charles explained he liked to watch the news, followed by a good BBC police drama. We sunk back into the low sofa and watched with him. Before his bath at 9:30, Charles pulled a long canvas bag from the back of his front hall closet.

“The camp cot!” he declared as he unrolled the stiff fabric and set up the metal frame in the centre of the room. The final effect was more ‘narrow rectangular trampoline’ than bed, but James slept on it, suspended just above the beige carpet beside the electric fireplace and the pampas grass.

And as I was saying goodnight to James, just before I would wobble in my twin bed as Ernie would, Charles dashed past the sitting room, naked, on the way to the bath. This too, as it turns out, was in the schedule.