By Lindsay Cameron WilsonMarch 2, 2017No Comments

My first thought was SHRED IT. But then I changed my mind.

Last week I shared my secret to getting through snow and sick days: cuddle up and purge anything within arms reach of the sofa. It’s deeply satisfying, both getting rid of stuff, but also pouring over the treasures found. Last week’s treasure was a recipe. This week, an essay. (BTW – it has stopped snowing).

The essay was tucked into a cardboard file box, filed in a folder called ‘writing’. I wrote it nine year ago for my friend Gilly. Our kids were the same age – she had two girls, I had two boys. Our work days were different; Gilly was directing a children’s animation, I was writing cookbooks. But we were both equally torn between the domestic and the professional, struggling daily to juggle balance, sleep and happiness. Every time we got together we would talk about this juggling act. One day, after a particularly exasperating vent, we challenged each other to record our thoughts in short essay form. We’d call it a ‘day in the life’, print it off, and share it with the other. It would be cathartic. Helpful. A creative outlet.

Inside that file I have both her essay and mine. This is what I wrote:

My weathered Timex sports watch beeps: the time is 6:11am. It’s dark outside, but the sky is clear. I feel around for my pile of running clothes, tip-toe into the bathroom and quickly shut the door. I don’t want the light to wake the sleeping men in my life – my husband, or my two sons who share a room across the hall. One is almost two, the other almost four, and both have just started sleeping through the night. The extra sleep leaves me strangely euphoric. Four years of sleep depravation makes eight, blissful hours feel like an eternity. I have to capitalize on this euphoria; I have just thirty-five minutes before the silence breaks. Before the globs of porridge dot the floor. Before a sagging diaper begs to be changed. Before one is shuffled to morning pre-school and the other to the grocery store. Before I have to turn a chocolate birthday cake into the Death Star. Storm troopers, with guns in hand, will dot the cake. It goes against all my pacifist hopes for motherhood. But little boys can change all of this. The birthday boy flips longingly through the tiny promotional fliers that Lego distributes, sighing over their line of Star Wars ‘bad guys’. He’s a gentle fellow, but bad guys make him happy. Happiness is what enables me to cover a cake in dark grey icing and decorate it with gun-touting storm-troopers.

Happiness is also time alone at 6:11am.

Gilly now has three girls, I have three boys.

I found that essay at just the right time.

That little boy, who still loves Star Wars, is turning thirteen this week. He wants a chocolate cake with chocolate icing. ‘Bad guys’ are always a welcome addition.

Gilly just moved back to Ireland, where she will continue to work in children’s animation. But before she left, we got together and laughed over those essays. It was the kind of laugh that is infused with nostalgia and compassion for our younger selves. Life balance is an ongoing struggle, but it’s easier now. We’re better at it. It takes practice.

The day we got together was Gilly’s birthday.  We made mushroom risotto and chocolate cake with sprinkles. We celebrated Gilly, friendship and the years she spent here in Nova Scotia. The young kid years. The professional growth years. The hard years. The precious years.

Perhaps next year Gilly and I will write another ‘day in the life’. It could be an ‘every tenth February’ exercise. Who knows where we’ll be or what we’ll be doing. But I do know one thing – we’ll be eating birthday cake, maybe chocolate, perhaps with grey icing, with sprinkles or some bad guys. Whatever makes us all the happiest. 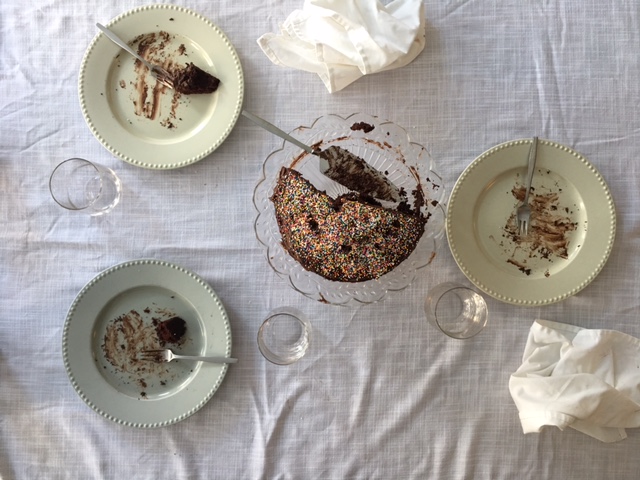